I don't normally fill in online questionnaires or do any 'internet meme' (I had to look that phrase up) that routinely do the rounds on the bloggosphere. The principle reason for this is because I have very limited access to the internet i.e. only at work. Any site containing the word 'game' is routinely blocked so I try and keep lurking and posting to a necessary minimum. So apologies if I don't get a chance to comment, reply to or miss messages.

However I was very flattered when I received a message from Michael over at 28mm Victorian Warfare. I was also prompted to do this after reading a post from The Lair of the Breviks by Andy Walker. Regarding this Liebster Blog Award thingy Andy puts it far better than I ever could:

"This little number has been doing the rounds in the blogosphere - it's a rather nice way of getting other people's blogs noticed, which I'm all in favour of. There's so much good stuff out there, and there may be one or two that you never knew existed....and we need to share the spotlight."

Therefore, largely ignoring the original award criteria (my blog, my rules), I'd highly recommend the following sites, in no particular order:

Harness and Array - stunning medieval figures and plenty of historic background information.
Life in The Man Cave - my mate Ade's blog. As genuinely nice and funny in real life as he is in his videos. (2300+ YouTube followers can't be wrong). He's too modest to promote his own stuff but I'm not, so I will!

28mm Victorian Warfare - both top notch quality and quantity from Michael's many varied figures. Always a pleasure to read his blog. If you haven't visited his site, please do. The variation of figures presented and the skill level of the painting makes regular visits well worth while.

You may notice that these blogs strongly feature modelling and conversion work, which shouldn't be not surprisingly as it's my favourite bit of this hobby.

Honourable mentions must, of course go to Ray's Don't Throw a 1 and Fran's The Angry Lurker. There aren't many posts that genuinely make my laugh of loud but those from Ray and Fran regularly do so. Depending on your age they are either the 'Morecombe and Wise' or the 'Ade Edmondson & Rik Mayall' of blogging. I was going to say they were the 'Bottom of the Blogosphere world' but that sounds rude. (I still have happy memories of crying with laughter watching some of that first series in a Dublin hotel in the early 90's with Guinness shooting out my nose).

Always encouraging and complimentary with their messages (although not always to each other!) Ray and Fran are genuine stars of Blogger.

Yes, I'm finally back on the wagon! Well, at least painting-wise (apologies for the awful pun). This is the first set of miniatures I've painted since at least September but this isn't the new set of figures I promised in the previous post, which I hope to complete and post on here shortly. 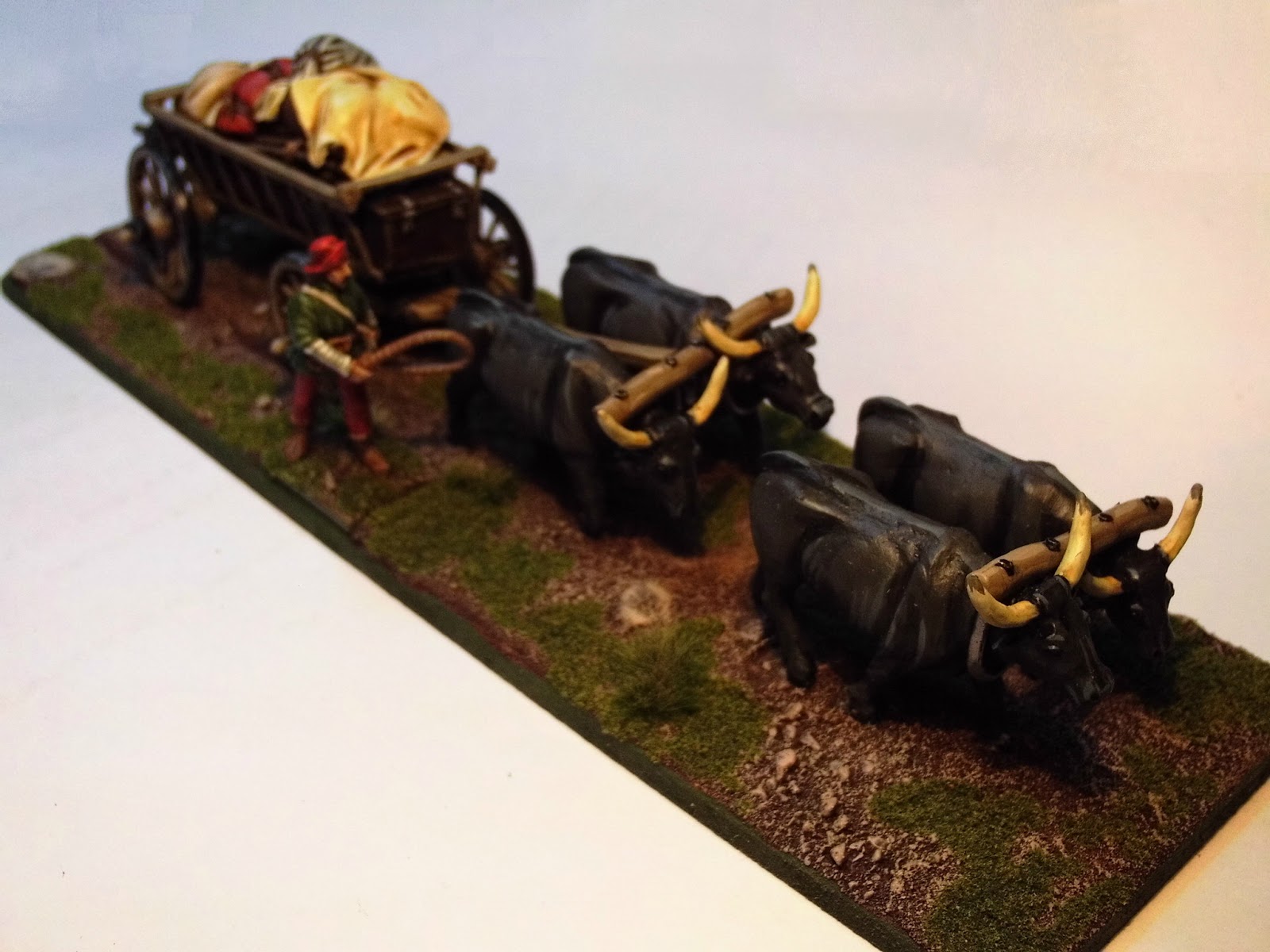 This is the 'Ox wagon, (includes wagon, baggage, 4 oxen plus drover, woman and child) 'Code: WR24 currently £20.50 from Perry Miniatures. 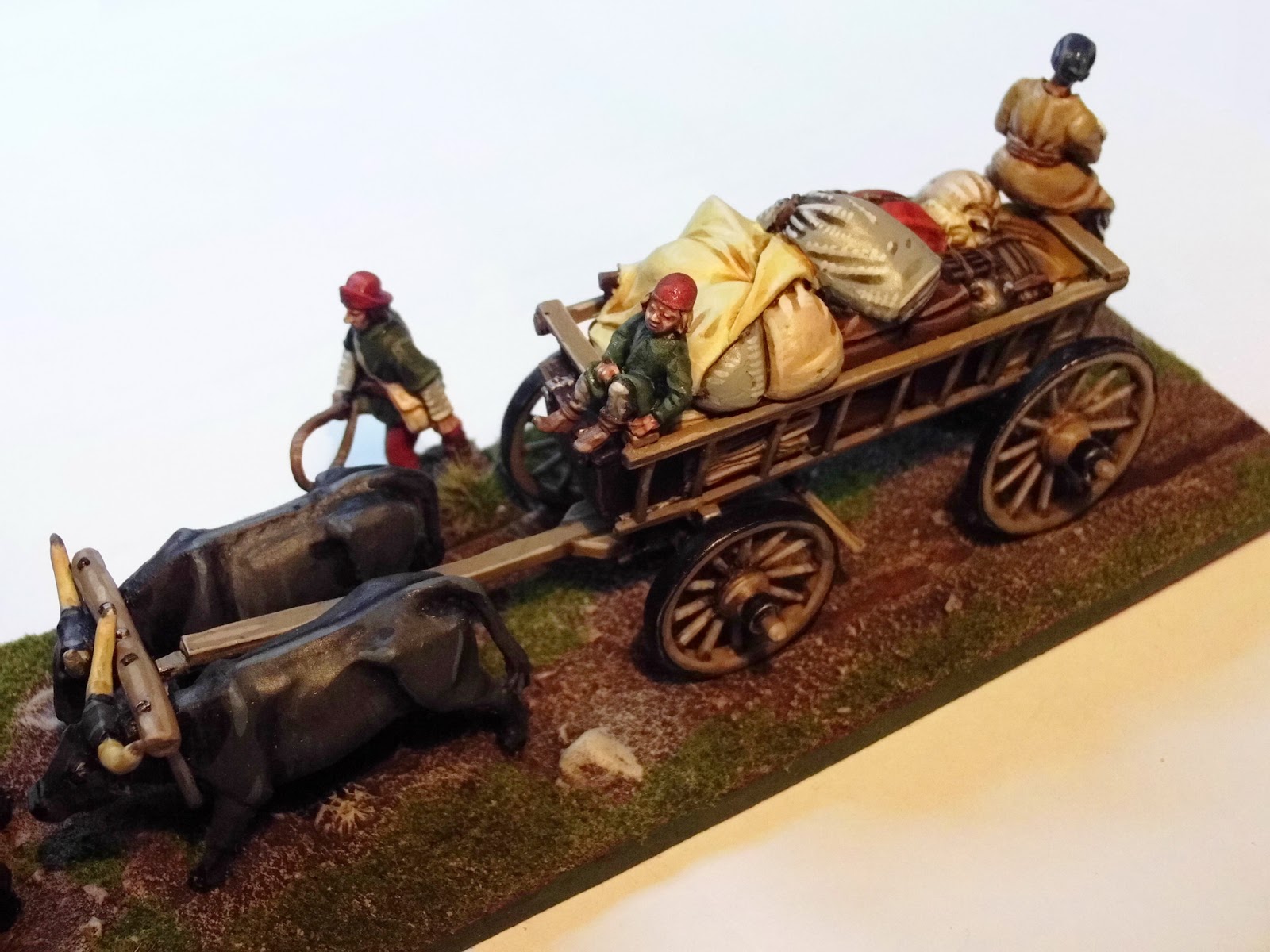 Opening up the two boxes, you are confronted with a multiple of metal and resin components. Most of the parts are obvious, for instance the ox come with separate heads but I couldn't work out what four particular items, which looked like bent pitchforks, were supposed to be. After eventually checking their website I found that they fitted vertically over the top of the wheels and fixed to the carriage. I left these off the final simply because I didn't like the look of them. I'm sure they are authentic given the Perry's reputation for accurately but I thought they just looked a bit odd. 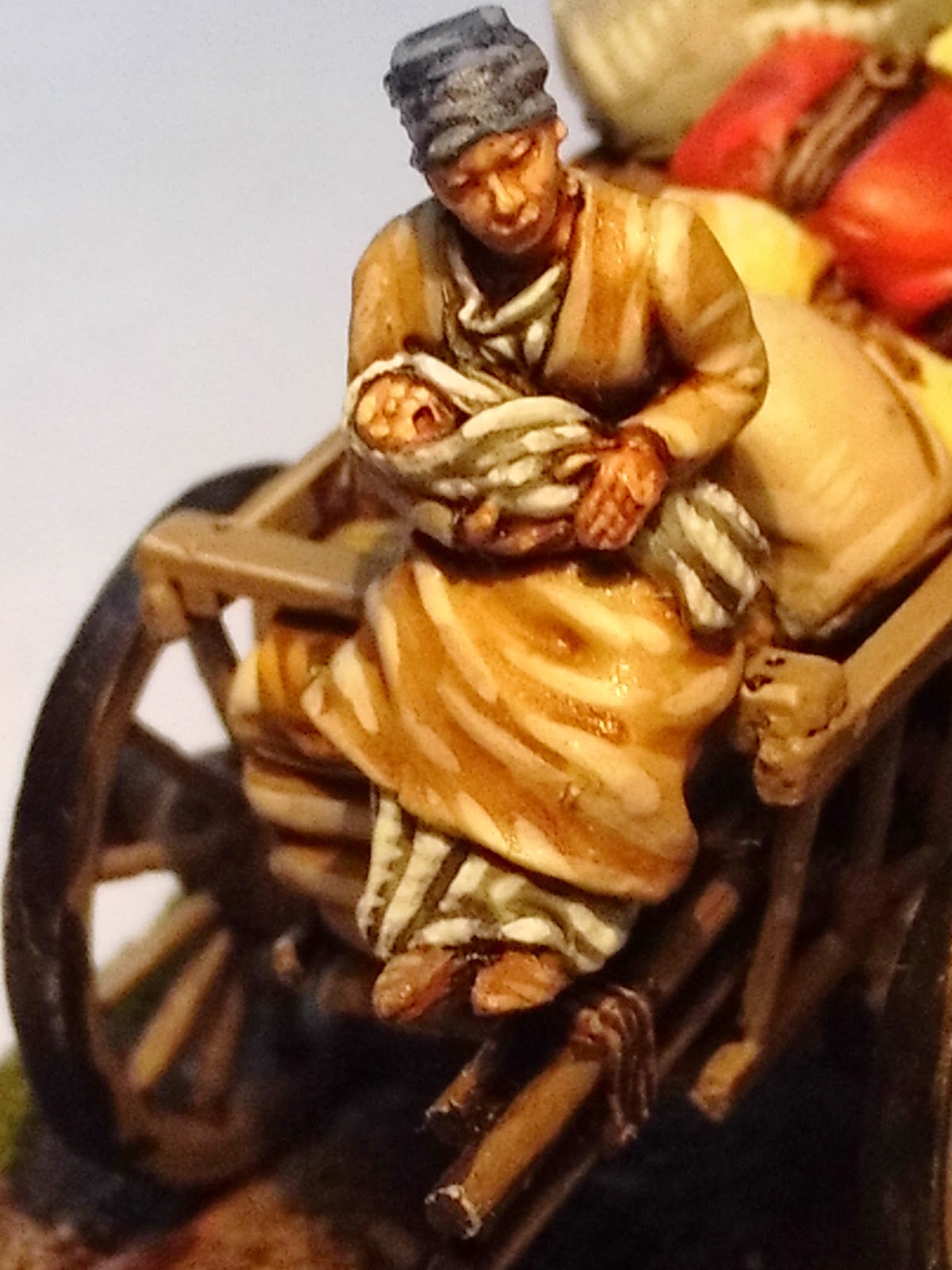 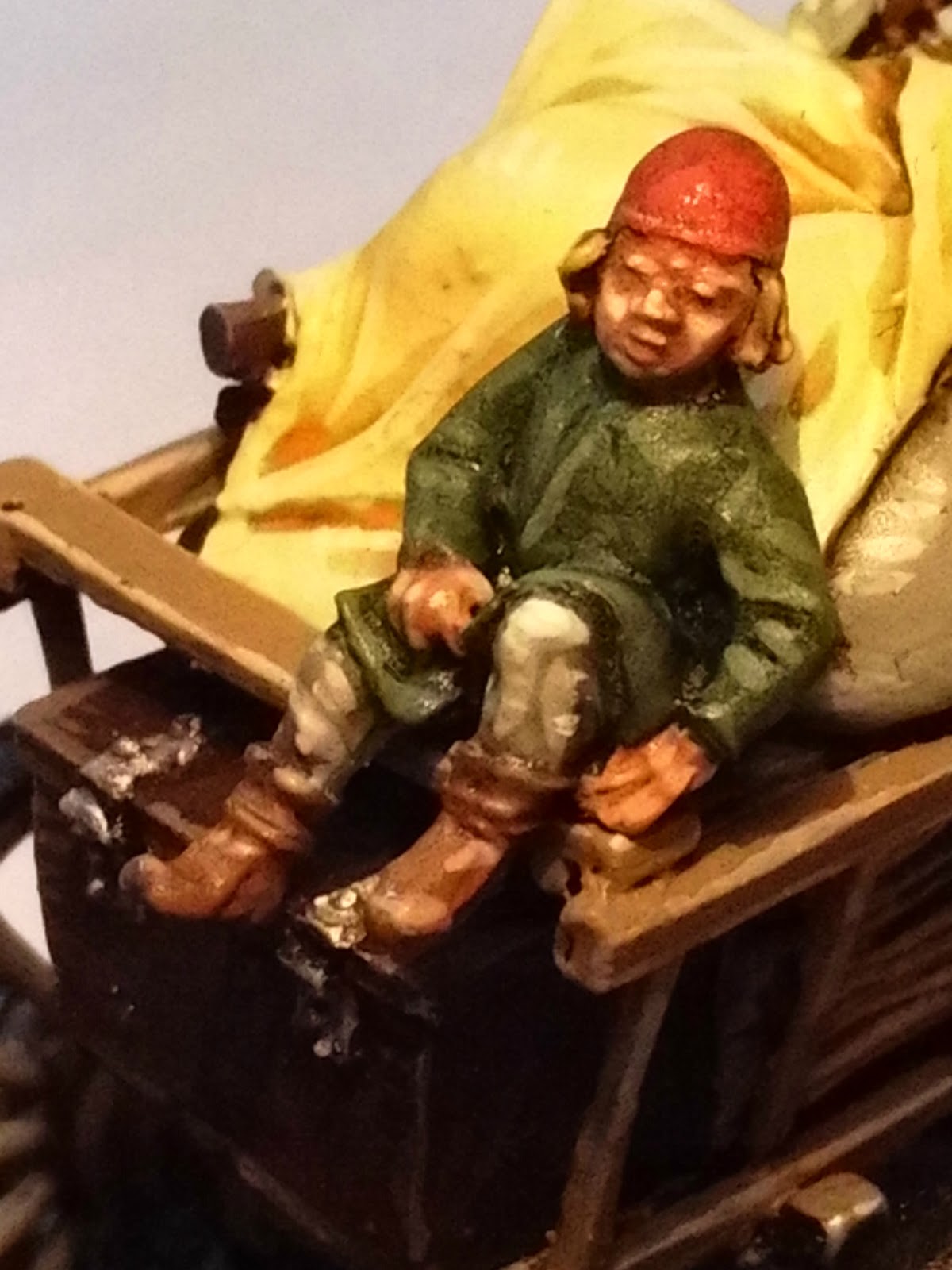 The set comes complete with three human figures the drover, woman (with a baby) and child, shown above. As the set is part of the War of the Roses ranges the figures are suitably detailed however my brother reminded me that he had picked up another figure that would also go well with this ox set.

I have no idea who the manufacturer of this figure is, my brother found it in a back room of Spirit Games in Burton in a pile of second hand figures. The figure still had traces of paint and a fair amount of flash on it but I can only guess that it's quite old. After a quick clean up I repainted him. The only thing missing is his jar of cider and a straw in his mouth.

Using the same technique I had previously used on the trebuchet model I've made the figures removable. This way I can use the original figure for medieval/Cry Havoc games and the other (mystery) figure for any period from the 17th C onwards. 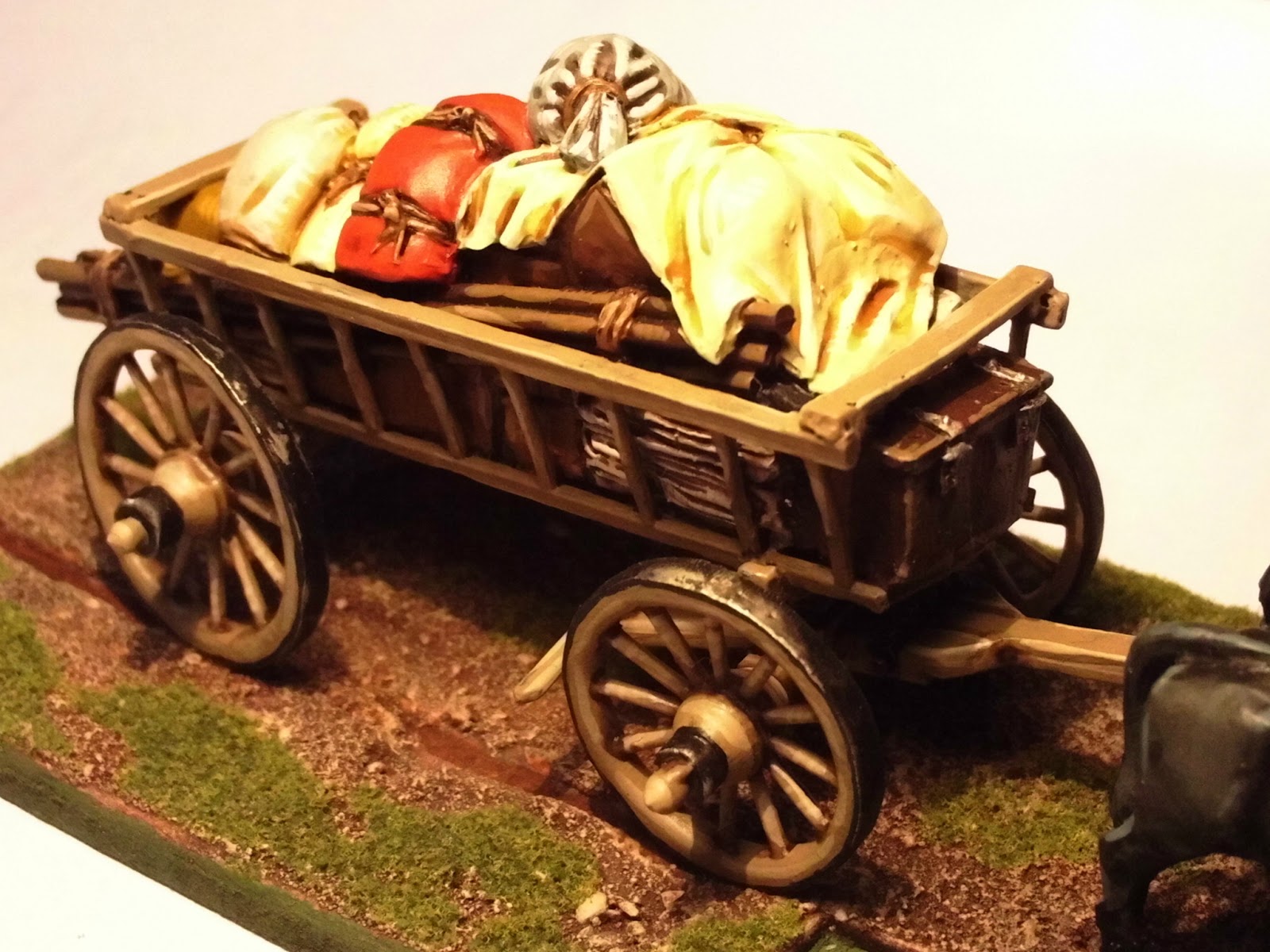 The resin luggage is nicely detailed, there's even a big old cauldron hidden in amongst there if you have a close look.
Posted by Ubique Matt at Thursday, November 15, 2012 12 comments:

This is the latest WIP for my 'little' Great Round Tower side project. The Tower itself isn't finished but I have managed to complete the hourding itself (hurrah!).

The colour choice for the tiles was easy, these were simply painted to resemble slate. As I've previously stated I had intended to finish the woodwork a more standout colour scheme, namely red. And I did indeed paint this part of the model red. Not entirely happy with the results I left the model alone while I was trying to figure out the stairway and entrance (in fact, this is still very much an ongoing problem).

However on a recent holiday in the south east of England I had a chance of mind. On the very last day of our visit (we finally managed to visit thirteen castles in total, that's not counting forts, towers, churches, manor houses and other historic sites) we arrived at Dover castle, still one of the largest and most impressive castles in the country.

It was within the great square tower itself at Dover where I had the opportunity to speak to one of the guides. The interior of the keep has been recreated to how it may have looked during the time of Henry II's reign. Ironically (at least I thought so) as the building is listed the walls couldn't be painted so the wall hangings have been introduced to give the impression of the colour scheme. Every detail would have been made to impress, including the choice of the colours. Blue, green and red painted furniture would have cost a small fortune. The guide informed me that, for instance, the blue colour would have been made with lapis lazuli which was sourced from as far away as northeastern Afghanistan. Green was made from the mineral malachite.

It was with this in mind that I decided to repaint the hourdings to resemble plain wood. As I had previously wasted a small pot of Citadel paint with my previous effort I headed to the nearby DIY store (B&Q) and purchased a few test pots of emulsion. I eventually ended up using Crown Ultimate Cream Dark matte finish. The colour is quite similar the Citadel's Baneblade Brown but at around £1.50 for 75ml for a test pot is a bargain, especially if you're painting a large scale object, but I would recommend watering them down slightly.

The hourdings were painted in the new colour scheme but with a small exception. Next time you visit a castle take a look above the main gateway. Sometimes you can spot the builder's family coat of arms carved in stone. Nice examples can still be seen at Bodiam castle. 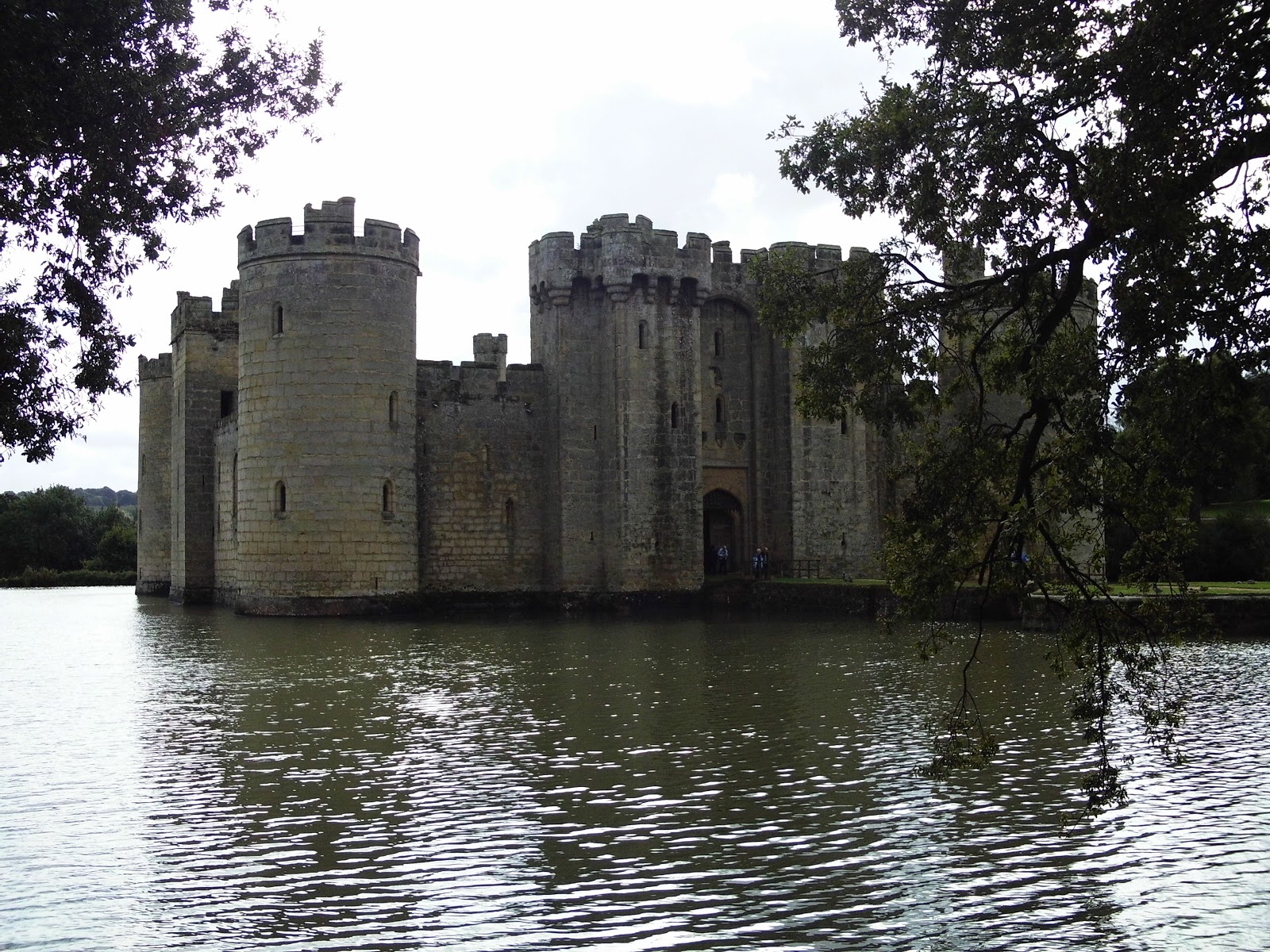 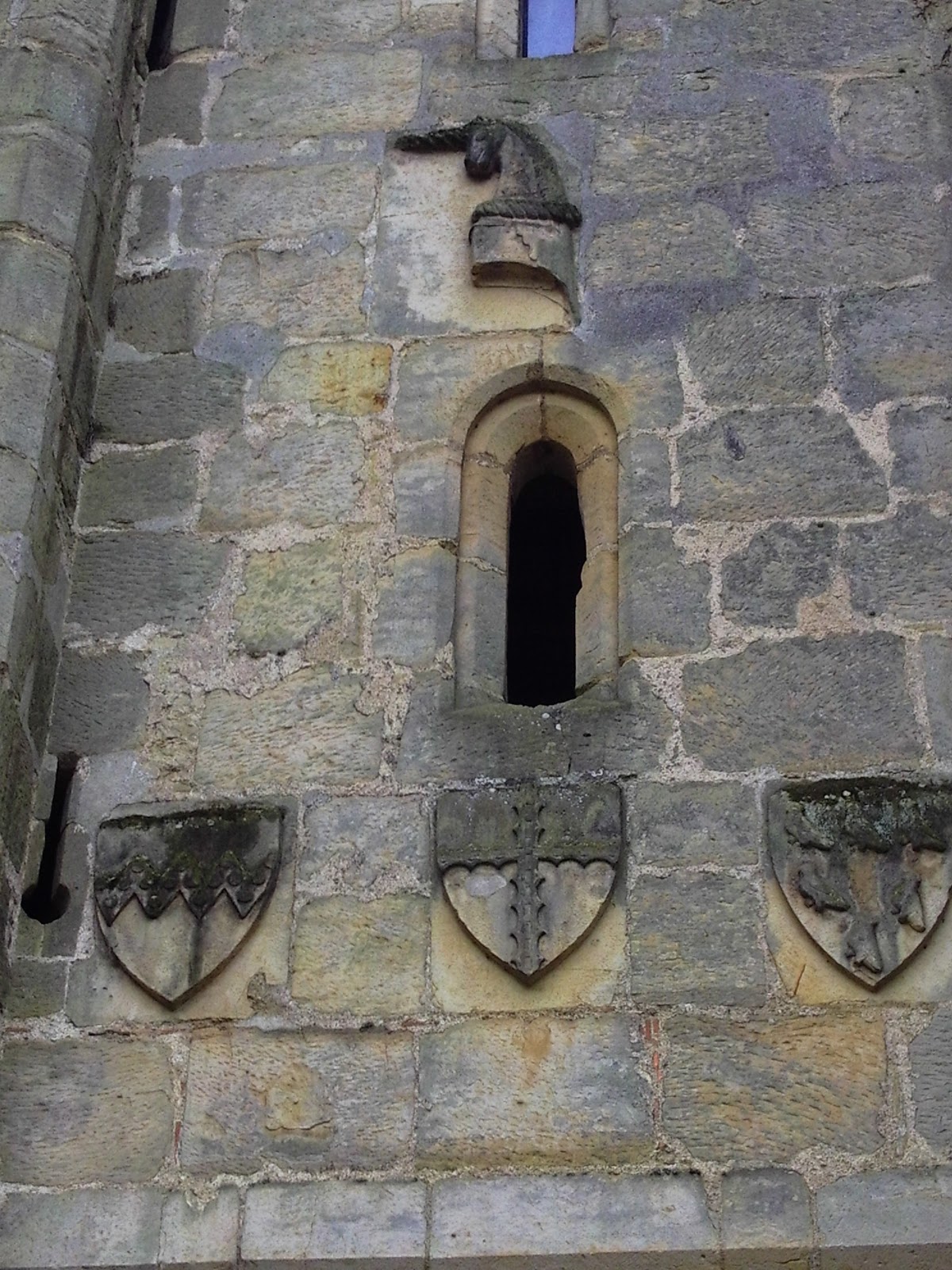 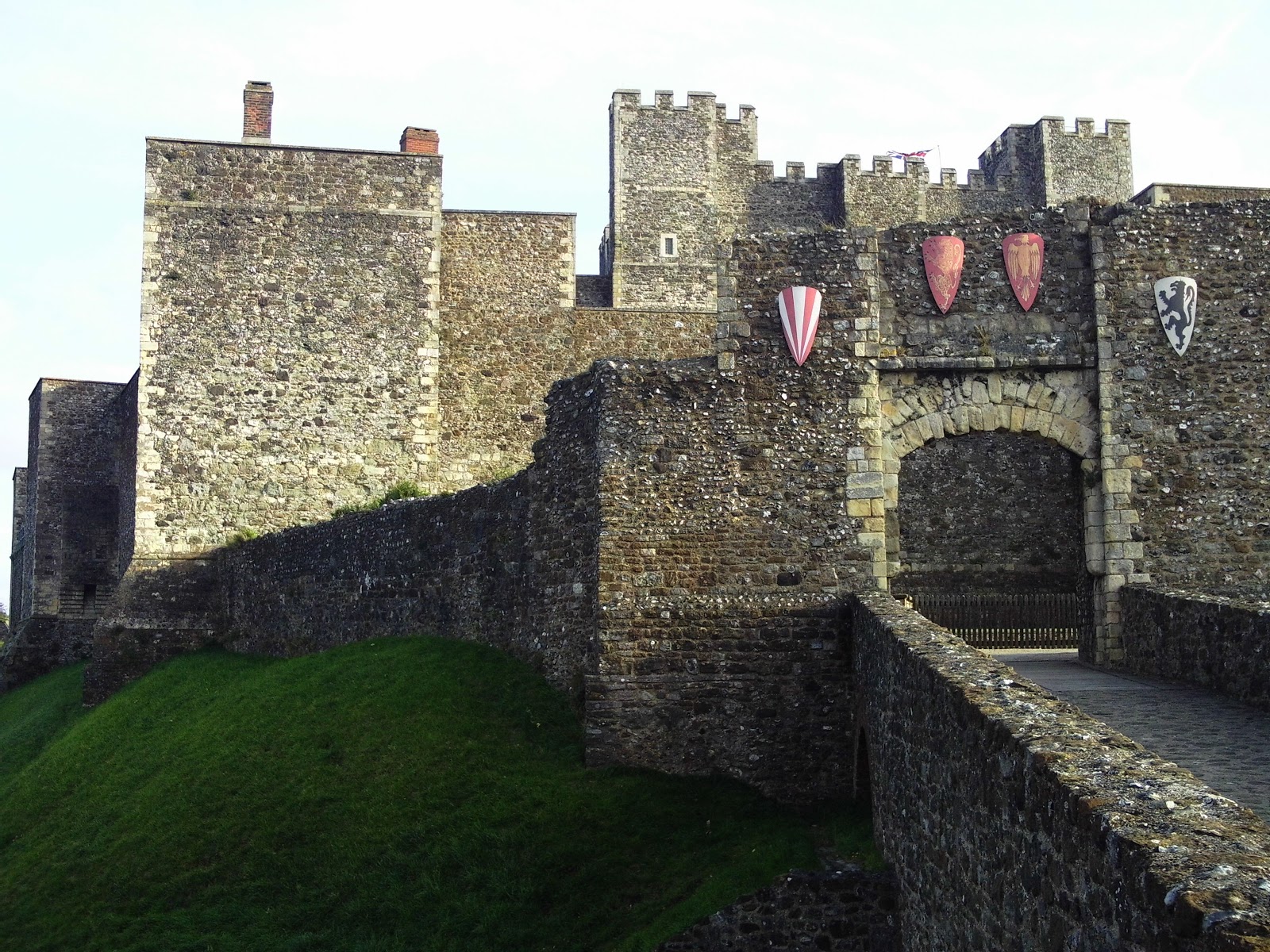 There are also several very large (modern) kite shields above the King's (?) gateway at Dover. So I thought I'd try and recreate something similar. Coincidently Dover had been defended by Hubert de Burgh, builder of Skenfrith, against Prince Louis in the great siege of 1216 (and again in 1217). I painted the vertical timber pieces using the coat of arms of de Burgh as a refernce. The unusual pattern, known as vair, is based on heraldic representation of patches of squirrel fur in an alternating pattern of blue and white.

"The squirrel in question is a variety of the red squirrel. In the coldest parts of Northern and Central Europe the winter coat of this squirrel is blue-grey on the back and white on the belly, and was much used for the lining of cloaks called mantles. It was sewn together in alternating cup-shaped pieces of back and belly fur, resulting in a pattern of grey-blue and grey-white which, when simplified in heraldic drawing and painting, became blue and white in alternating pieces." - Wikipedia

Happily there were two timber uprights that were positioned either side of the doorway, this enabled me to place a shield centrally above the doorway (this was down to pure luck rather than design). The shield is a taken from a Google Images file of de Burgh's coat of arms, stuck to a piece of cardboard and then trimmed to size. Now I only have to worry about making that infuriating entrance porch and the curved flight of steps!
Posted by Ubique Matt at Thursday, November 08, 2012 5 comments: