These markers are used to keep track of individual losses for multi-based figures. whilst playing the (as yet to be released) 17th century skirmish ruleset from Osprey, The Pikeman's Lament. The modified figures are taken from the Warlord Games 'Firelock Storming Party' box set. 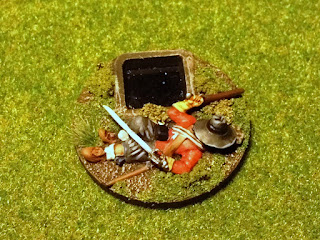 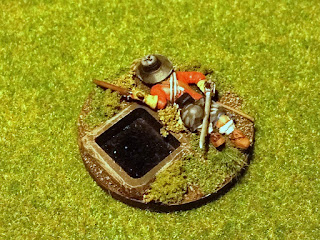 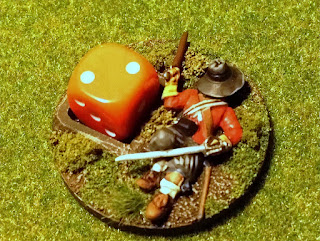 As I don't particularly like to depict the face of death (I prefer to put the emphaise on gaming when wargaming) I covered the face of one of the plastic 'causalities'. As making these bases are quite time consuming and uses up relatively costly figures, for future markers I will probably just produce simpler bases with the detritus of the battlefield.

A YouTube video of how I made similar markers (for Bolt Action pin markers) can be found [here]. 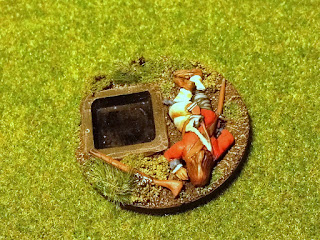 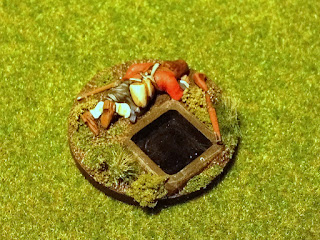 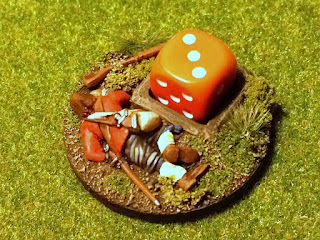 I had previously relied on having loose individual dice to mark casualties but when die are being scattered across the tabletop it is very easy for these to get lost amongst the chaos. Using markers like this also then at least you have a decent chance of being able to keep track of things. 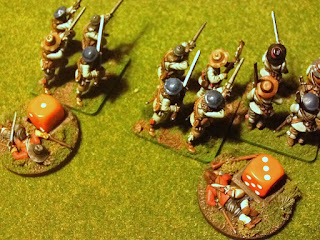 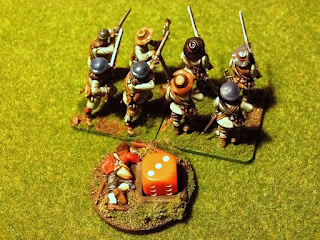 The co-author of the new The Pikeman's Lament rules, Dalauppror, has come up with an unusual basing system which can be used with the rules. Keeping true to the spirit of the original rules (i.e. newcomer friendly and flexible), this basing method doesn't have to be strictly adhered to, it's just a recommendation to aid game play. Details of Michael's method can be found [here].


It isn't a basing method that I'm going to use simply because a lot of my figures are already based in groups of four. If you're going to be using the core mechanics of the Lion Rampant system then it may be worth considering, especially so as I believe that this group of rules will be considered future classics of their type.
Posted by Ubique Matt at Wednesday, February 10, 2016