A Miniature Review of my 2013 Preview

After briefly looking back over my 2013 preview post of last year I thought it may be of interest, if only to myself, to reassess the post itself in order to compare and contrast to what exactly I accomplished (it will also help to achieve the probable vain attempt to post at least once a month. So here goes (text in bold italics is taken from the orignal 2013 preview):

'I'd like to wish my followers and visitors to this blog a belated very happy new year.'

Again I realise it's a bit late but I would like to wish a very Happy New Year to all of those kind enough to follow this blog and, of course, all the occasional visitors that stubble across the site. I noticed after the holidays that the blog broke the '200 followers' mark. I found this particular result more pleasing than achieving 100,000 page hits a while ago. This of course is just my personal opinion but its mainly because I've noticed some very odd spikes in viewing figures. I can only assume this is spammers or various other random elements that give false readings (possibly). So once again I'd like to thank everyone that has taken the time and effort to 'follow'.


'I had considered writing a review of 2012 but I don't think there's much point in repeating myself when you can simply skim through the year's posts.
Same, I won't actually review the year as you can simply speed read the previous posts.
'I did somehow manage to publish 67 posts which is a personal best for me.'
Whoops - only 28 posts for 2013, a new personal annual record low.

'I don't intend to buy many, if any, figures (famous last words) during 2013. Painting wise I don't intend to set myself any definite targets after I experienced a major case of 'painters block' towards to the end of the year'.
Fail - I bought lots of figures and models (some of which I also happened to paint and finish - hard to believe but true). For some unknown reason I suffered another bout of 'painters block' around the same time in 2013. I do intend to stick to the credo, 'I've not going to buy any more figures this year' (well, all except for a small number of medieval civilians and jousting figures from Curteys Miniatures, of course).

WWII Soviets - Bolt Action
'I aim to field my Soviet forces for Bolt Action as soon as possible so I can actually play a game! I did manage to visit Ade with his brother Jon just after Christmas a play a few games.'

A fair amount painted but no way near enough. Too many of these figures are just primed or even worse still just bare metal. It didn't help that I bought even more Bolt Action figures although these were Italians.


'Medieval Stuff
I hope to finally complete the Great Round Tower that I started back in September. Recently, when I was struggling to see how I could make any progress, I was tempted to wear it as a hat and stroll around town pretending to be Abraham Lincoln or Isambard Kingdom Brunel. Realising this would probably result in me being detained in a padded cell for the foreseeable future I've opted instead to try and finish it. Either that or I'll boot it into the nearby park and give the local squirrels a new folly they can call home.'
Completed! Blimey it only took me a full year to finish the infamous Great Round Tower and no squirrels were harmed in the process.

'I'm hoping to complete a lot more medieval figures, concentrating on representing genuine characters from throughout Edward I's life and times...'
More on this a little later.


'I purchased a great big Zvezda model from Mr. Models in Bearwood, Birmingham... probably as far removed from the 'love bombing retail experience' you get when you visit a certain chain of high street wargaming stores as is possible. The model itself is the largest model I've ever bought and is something I'm looking forward to making.'
Again - completed! Hurrah for me. A very nice model, more complex than I initially thought. I know now why the model is normally shown incomplete. I had a cunning plan that actually worked and allowed me to depict the model as it was intended. Don't worry, all this will make more sense when I post images of the model (as soon as I manage to take some photos).

'I also have a eight part posting ready to go on Sir John de Sutton VI, Lord Dudley, a fascinating character from the Wars of the Roses period. The only snag is that I still haven't painted any appropriate figures yet!'
Nope, embarrassingly still not a sausage and a continuing personal bugbear but I did however manage to paint up one of his Dudley baron predecessors, Roger de Somery.

Scales
'I plan to paint up a few other figures in different sizes from my normal 28mm (shock, horror). All I'm going to say is that there are some great big figures and an awful lot of tiny figures waiting in the queue.'
Nope, another complete failure on my part.


'As I'm sure is the case with many other modellers/wargamers I have dozens of ideas and little side projects ideas floating about in my head regarding terrain, figure modifications and various plastic model kits. One thing which hopefully I'll be able to do is post a few tutorial videos (any suggestions or requests will be considered) via Ade's site. You may even see me on a few of Ade's Bolt Action battle reports.'
We did actually manage to play and record a couple of games for Ade's YouTube channel.


So although it may not appear so, judging from the distinctly low quantity of posts, 2013 was a relatively productive year for me despite numerous setbacks. I have made steady progress painting figures and making models.

After Ade's enforced career change and his move into full time wargaming I really need to knuckle down and produce more videos for his site. The amount of time and effort involved in making the battle reports to the standard that Ade is now achieving is quite daunting but also rewarding.
It's gradually dawning on me that skirmish level games are the way forward for me personally. A number of factors have influenced my thinking on this:
So basically I'm recreating my childhood and playing similar games I did as a youngster such as the old classics Cry Havoc and Siege.

Speaking of which one of the highlights of the forthcoming year will be the launch of a new set of medieval skirmish rules, from the famous Osprey Publishing, Lion Rampant written by Dan Mersey. This is due in autumn 2014. I've been fortunate enough to have been able to make a small contribution to the rulebook. I'm not exactly sure what is being used so I won't spoil it by posting any of my own images here until after its release. This however is the cover: 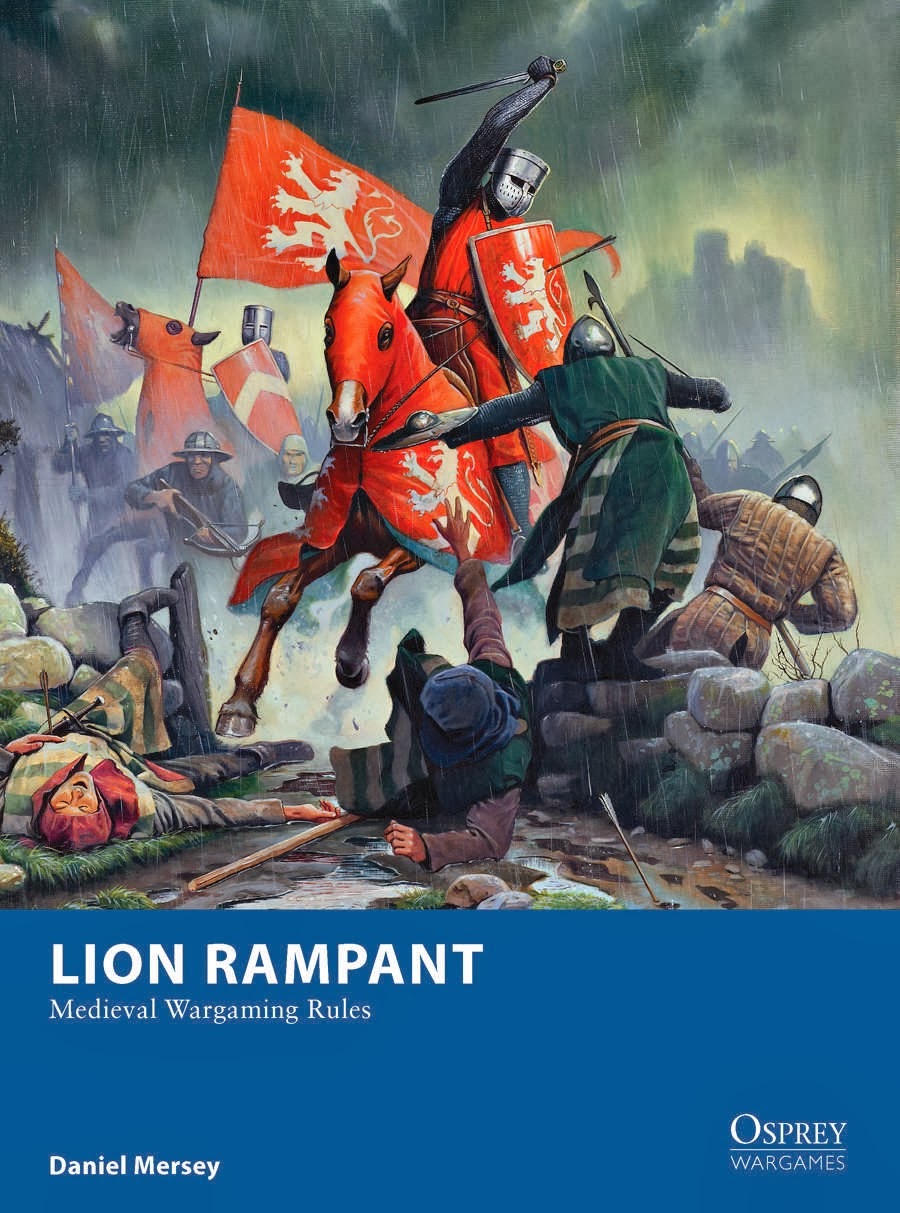 Some eagle-eyed readers amongst you may have already spotted this image before, like my smarty-pants brother did, as Osprey used it as the cover for their January - June 2014 catalogue (which then confusingly failed to make any reference to it). The success of their new range of wargaming stand- alone rulebooks seem to have taken Osprey by surprise, something they admit to on their website. It's going to be interesting to see where they go with this series.

I'll be posting a fair few articles nearer the launch date relating to painted mounted knights based on the Anglo-Welsh wars (perfectly suited for skirmish games and campaign), medieval buildings and other appropriate terrain; a number of which will be in video format via Ade's own dedicated Wargaming For Fun site plus his YouTube channel.

So at least I'll be able to guarantee some new material over the coming months. How the large majority of bloggers manage to deliver quality and quantity posts continues to baffle me but I intend to better last years effort (which shouldn't be too difficult).

Hopefully I'll be attending shows/conventions in Alumwell WMMS (held over the border in wild Wolverhampton), Derby and BlogCon in Nottingham. After missing the inaugural event this is one convention I really would like to attend. So if you're planning to be at any of these shows please feel free to introduce yourself.

So the final Word of 2013? For me it has to be 'Defenestration' - a fate that very nearly befell a number of my work colleagues towards the end of a long year!
Posted by Ubique Matt at Tuesday, January 07, 2014 16 comments: