I was initially drawn to completing a regiment of Newcastle’s Whitecoats because of their famous last stand at the battle of Marston Moor. This regiment is one of the few involved during the English Civil Wars that we know the colour of their uniforms - the clues in the title (and there is even some doubt about this!). 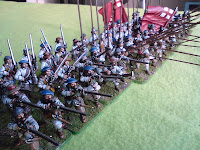 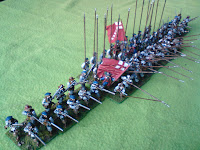 Although details of the life of Marquis of Newcastle are plentiful and readily available I’ve been unable to find detailed information about the Whitecoats regiment itself. As with many units of both the Parliamentarian and Royalist armies trying to find any information can be frustrating and sometimes even contrary.

Looking into the history of Newcastle’s Whitecoats Regiment, or the Newcastle Lambs as they were sometimes known, their last stand at Marston Moor doesn’t come as a real surprise. The veteran Whitecoats are thought to have fought before on numerous occasions including Piercebridge and Adwalton (June 1643). They had also previously refused to surrender to the forces of Sir Thomas Fairfax at Wakefield. Interesting accounts of the battle can be found both here and here.The final attack was carried out by Dragoons and Ironsides cavalry. I’m curious if the late arrival of the regiment (they had been busy looting the Parliament’s baggage train from the earlier siege of York) onto the battlefield was a factor of their decision to make a stand (‘death before dishonour’ and all that). A unit only referred to as ‘Greencoats’ also made a further ‘last stand’ but little information is recorded about them.

Lieutenant-Colonel James Somerville described the final moments of the action that had lasted almost an hour, although by this time Somerville himself had actually left the battle field, “Here the parliament horse of that wing received their greatest loss and a stop for some time to their hoped-for victory, and that only by the stout resistance of this gallant battalion,…until at length a Scots regiment of dragoons, commanded by Colonel Frizeall, with ammunition was spent, having refused quarters, every man fell in the same order and rank wherein he had fought”.

The Duchess of Newcastle later wrote that the men had ‘showed such an extraordinary valour and courage in that action, that they were killed in rank and file.’ It is known that the Marquis of Newcastle himself was probably the last senior Royalist of note to leave the battlefield.


William Lilley recorded an account of an actor by the name of Camby who had served at Marston Moor as a Parliamentarian cavalry captain, he recalled that he had never before encountered ‘such resolute fellows or whom he pitied so much’.

From several thousand (possibly as many as three thousand) men only 30 Whitecoats were taken prisoner.


All the figures seen in this post are by Warlord Games. The large majority of the miniatures are from their main plastic 'Pike and Shotte' range, although if a couple look unfamiliar then this is because I've converted a fair few. This is very easy to do with plastics. A small number of figures are from their excellent metal pikemen range and make a nice alternative to the plastics. 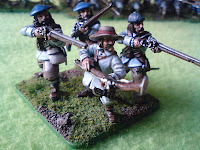 My main source for the uniforms has been from the 'The English Civil War 1642-1651 An Illustrated History' by Philip Haythornthwaite. The illustration shows several details I’ve incorporated into the miniatures such as white leggings tied up with red ribbon and armless buff coats.

The book states that several Whitecoats were known have worn red coats but I wanted a more uniform look (no pun intended). Another recorded feature of the regiment is that a number of soldiers wore a cross made from red and blue material on their coat sleeves. I’ve added a few of these onto the left shoulder of a number of the miniatures. For pikemen and musketeers the left arm would be the one generally facing the opposition when in action. This must have acted as both a field badge for friendly units and a mark of defiance aimed towards the Puritan Parliamentarian forces.

I varied the colour of the armour throughout the regiment. There is silver for polished armour, black to represent painted items and brown to represent natural patina. I’ve added brown breastplates as this is often the colour seen being worn be re-enactors. It all helps to add to the variation into what is relatively a plain looking unit.

Number of small modifications such as on this figure where I have removed his tassets (upper leg armour). I imagine this would have been quite common in real life as the protection they offered wasn’t proportional to their extra weight. This simple effect was achieved using a sharp knife and needle files to remove the plates and then smooth down the plastic. 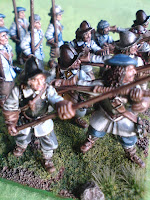 On several pikemen figures I added a snap bag from greenstuff based on the book from Osprey which shows several men carrying this type of bag. I was pleased when I later bought the metal Warlord pikemen and saw that they were carrying similar bags on their backs.


I also reduced the bagginess on one type of the pikemen (the one in the middle of the spuce, I’m sure anyone who has bought a box will know which one I’m referring to) as the shape seemed to me as being excessive. 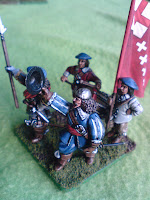 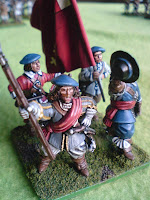 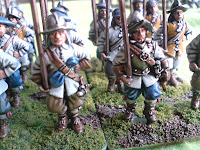 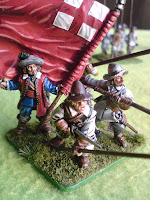 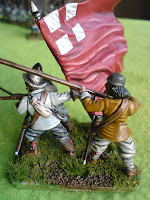 Because I used several of the arms from the Warlord Games Firelock set I attached a small length of metal wire to give the impressive of a match. After all they are supposed to be carrying matchlocks. 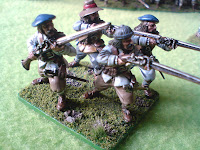 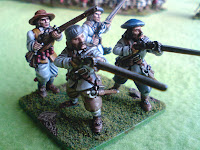 Speaking of which, next up, shortly, will be a group of Warlords' plastic Firelocks.