On a rare weekend when my brother doesn't have to work on a Saturday we visited Oxford. The main attraction is probably the Ashmolean Museum and Art Gallery. Interesting but useless fact - Elias Ashmole, the founder of this collection, was born on the same street (Breadmarket Street) as Samuel Johnson in Lichfield.

The Ashmolean has recently re-opened after a massive refurbishment and has now literally doubled in size. The emphasis is now on the influence and interaction of Near Eastern and Western cultures. For example in the new main entrance a Boeotian (Macedonian cavalry) helmet is on display next to items from Egypt and Rome. I couldn’t see the several beautiful (probably only one of the few military objects that can be described as such) Greek Hoplite helmets I recall seeing on a previous visit.

Disappointingly the Roman room was temporary closed. The famous Cast Gallery is due to reopen this time next year. The Alfred Jewel is one particular highlight in the largest display of Anglo Saxon objects outside of the British Museum although when the Staffordshire Hoard goes on display this may change.

If you need to kill of a few brain cells after all this exposure to high culture, then there a number of interesting pubs nearby to the Ashmolean. First visited was the Eagle and Child. This pub is famous as the meeting of the literary group called the Inklings, members included C.S. Lewis and J.R.R. Tolkien. They met in the Rabbit Room, which at the time was the private room at the rear of the pub. The pub is full of character but unfortunately fails at the first hurdle - the beer. Even thought the pub displayed the Cask Mark my pint of real ale displayed clear sighs that the pipes hadn’t been cleaned for a while. Actually my brother pointed this out only after I’d nearly finished my pint. Not realising it, we emulated the Inklings by crossing the road to the Flag and Lamb pub. They switched venues in 1962.

The Flag and Lamb pub is a very welcoming pub serving when we were there Skinners from Cornwall and Palmers brewed in Bridport, Dorset. This seemed appropriate as the famous Dorset resident Thomas Hardy set a part of ‘Jude of Obscure’ in this pub.

If you’ve walked through Oxford then there is a far chance that you passed this church, St Michael at the North Gate. It is the city's oldest building. Originally built around 1000–1050, for a small fee you can climb the tower dating from 1040. The church and tower formed line with the town’s Saxon defense wall. William Morris, best remembered now for his textile designs married Jane Burden here in 1859. 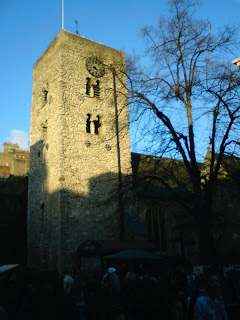 View from the tower looking north towards the Ashmolean. and the site of  where the Oxford Martyrs were burnt at the stake. 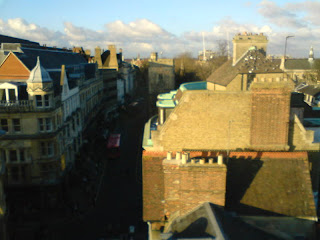 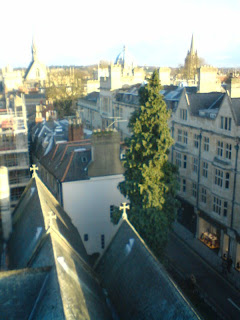 The Oxford Martyrs Latimer, Ridley and Cranmer, were tried for heresy in 1555 and were subsequently burnt at the stake for thir religious beliefs and teachings.

The martyrs were imprisoned at the former Borcardo prison near St Michael's church (at the north gate of the city walls).

The door of their cell in the tower of the church. 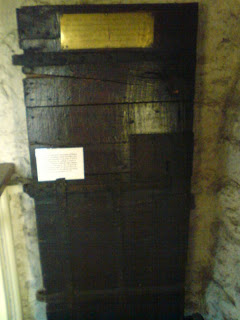 Rather than paying to go into one of the more famous colleges I’d recommend visiting
as it’s free to enter, the porters are friendly and helpful and there are numerous medieval buildings to look at, in particular the chapel and quad buildings.

View taken from outside Merton College. 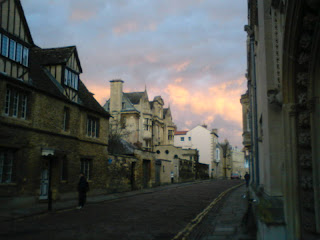 
First thing Sunday I attended the Wargamer show in Birmingham, the last show of the year. I thought the show was disappointing with only a few big dealers in attendance. There were several empty gaming tables but this probably reflects the economic climate. I managed to walk round the show three times in less than twenty minutes (I like to browse).

I was quite restrained and 'only' bought a set of Foundry paints (buff for the ECW cavalry) and a box of the new Perry plastic WoTR range. These are a very nice with plenty of scope for modifications. I’m sure some people will moan about the having to assembly them (heads, limbs and weapons are separate) but these will give you almost limitless variations (slight exaggeration) especially when the metal range is launched. Picked up two books; one is a very interesting ACW book 'Battle of the Civil War - Generalship and Tactics in America 1861-65' illustrated by Peter Dennis which details the actual mechanics of a battle. It does exactly what it says on the tin. The other is Warlord Armies by Tim Newark with plenty of illustrations by artists like Angus McBride and Richard Hook. Next show I hope to attend will be at Alumwell in March.

Posted by Ubique Matt at Wednesday, December 16, 2009 No comments:

I've now painted the reminder metal pikemen that will form part of my Newcastle’s Whitecoats regiment. The metal pikemen provide a necessary degree of variation to the blocks of pike. There are four figures in the metal pikeman `range`. An example of No. 1 can be seen here.

"An Armoured Pikeman carrying his pike at Porte, prior to bringing it down to charge." (All quotes are taken from the Warlord Games website.) 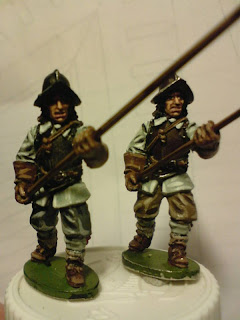 "A classic front rank pikeman in back and breast, and tassets to protect his thighs. He has slung his helmet and has a sash suggesting a file leader." 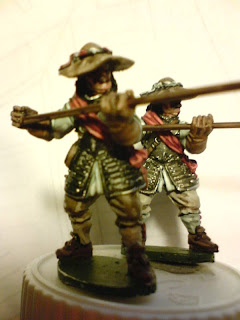 "Our Pikeman here is featured in the classic 'Charge for Horse' position, keeping low so the pike is presented at a horses chest, whilst he has his sword ready drawn. ...he is depicted shouting, and wears back, breast and tassets and a rather old fashioned style helmet." 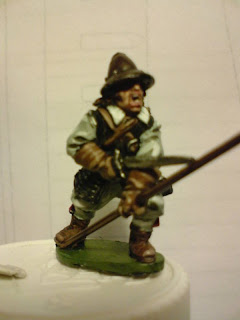 This leaves me with only the remaining final command group left. Hopefully these should be completed by next week (if I can avoid shopping and the massive German market in Birmingham, that is).

Before starting work on these miniatures from Warlord Games I had a relatively limited knowledge of the English Civil War. One of the highlights of this hobby for me is uncovering details about the people involved, their life and times (reliving my childhood is a bonus). Their influence on history often still resonates through to the modern age.

The remarkable events of the English Civil War were determined by some of the extraordinary characters of the 17th century. One such individual was William Cavendish, the Marquis of Newcastle.

Newcastle was probably what we would now think of as a stereotypical Cavalier. He was born in 1593 into a wealthy northern family, being the grandson of the famous Bess of Hardwick. He could be described as a polymath as he was an outstanding swordsman, an amateur architect; he also wrote music, plays and poems to an accomplished level. During his lifetime he was known as an expert horseman and his riding school at Bolsover Castle still survives today. He knew the philosophers Hobbes and Descartes, the painter Van Dyck and was a patron and friend to Ben Jonson.

He was a man of principle but also surprisingly proud and sensitive. When the Bishops' Wars broke out in 1639, Newcastle lent the King the vast sum of £10,000 for his campaign and raised a volunteer unit known as the Prince of Wales' Troop. When he joined the army he came under the command of the Earl of Holland (this Holland is an area in south-east Lincolnshire). When these troops were deployed at the rear of the cavalry, Newcastle took offence and challenged Holland to a duel. Only the intervention of the King himself prevented any bloodshed.

Another example which gives us a helpful insight into the man is when after the battle of Adwalton Moor in June 1643, Newcastle's troops captured the wife of Sir Thomas Fairfax. Rather than use this to his advantage Newcastle had the lady escorted safely back to Hull to join her husband.

Newcastle was appointed Lord General (commander-in-chief) of the Northern Army in June 1642 mainly, I imagine, because of his contacts and money. Although generally lacking martial experience Cavendish was smart enough to surround himself with component professional military figures including Sir Marmaduke Langdale,George Goring and Lord Eythin, although his Lieutenant-General of Ordnance, William Davenant, was actually a poet.

It was Newcastle’s success in the northeast England against Lord Fairfax and his son that encouraged Parliament to form an alliance with the Scottish Covenanters. It is interesting to note that at Marston Moor he didn’t actually have any command duties. In fact during the battle Newcastle fought as a gentleman volunteer but it is thought that he was the last Royalist of high rank to leave the field.

Prince Rupert partly blamed Newcastle for the defeat and there is some justification in this. It would appear that Rupert had intended to attack the numerical superior Parliament forces before they had time to organise themselves. Newcastle’s troops had arrived late because they had been looting the Parliamentarian baggage train left behind after the siege of York. Rupert’s aggressive Swedish style of fighting had previously proved effective against superior forces at Newark and it’s worth remembering that several Parliament commanders, including Fairfax himself, had left the field believing that they had lost before the tide of battle had finally turned in Parliament’s favour.

Reading about the man and considering that he had invested vast sums of money, fought for two years and had received little or no support from either the King, or indeed Prince Rupert, it is not too surprising that after the battle Newcastle decided enough was enough. This proud man could not, and would not, face the humiliation in court of losing his army so Newcastle resigned his command. Along with his family he left for the continent from Scarborough in self imposed exile with a party of 70 including Lord Eythin.

After the Restoration in 1660 Newcastle returned to England and was quickly invested as a Knight of the Garter. Later in 1665 he was created Duke of Newcastle. William Cavendish spent the last peaceful years of his life breeding horses and writing. He died, aged 84, at Welbeck Abbey on Christmas Day 1676 and was buried in the north transept of Westminster Abbey.

Latest Newcastle's Whitecoats countdown:
56 down, 8 to go.
Posted by Ubique Matt at Tuesday, December 08, 2009 No comments: