Not sure if this really counts as a modified figure as there only slight alterations but here goes:
To compliment the Major James Conner figure mentioned in the Modified Figures II http://ubique-matt.blogspot.com/2009/02/modified-figures-episode-2.html posting I thought it would be possible to group several miniatures together, based on the Hook illustration of ’s Legion in the Brassey's History of Uniforms American Civil War: Confederate Army book. The picture shows accompanying soldiers dressed in ragged clothing. One is shown sporting a green shirt which was obviously easy to replicate. 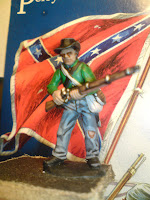 Before painting started I used a sharp scalpel and file to cut into the knee area to give the impression of torn trousers. Since this picture was taken I've repainted the shirt; I'm still trying to get the correct, more subtle, shade of green. This image was taken under quite bright artificial light, I'm still not convinced my painting technique is appropriate i.e. the shading on the trousers looks stripey. Although, saying that, the shading doesn't look that bad under normal daylight.

The only further other item needed to finish the figure will be to glue a bayonet to the end of the musket.
Posted by Ubique Matt at Tuesday, March 24, 2009 No comments:

Over the weekend I was having a look around my parents house as they still have a number of models I painted in my youth. This 75mm (3") high miniature was bought at a WMMS show around 20 years ago. I'm not even sure now who the manufacturer was, possibly Andrea Miniatures? 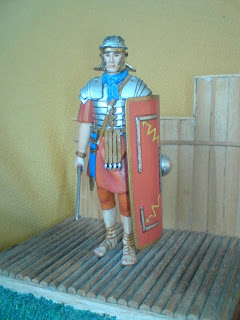 The fort detail is based on the reconstructed Roman fort at the Lunt at nearby Coventry. It's interesting that I still enjoy the modelling side of things, but from a painting point of view the figure looks quite crude now. 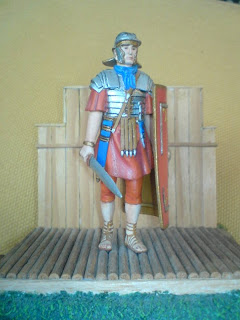 Email ThisBlogThis!Share to TwitterShare to FacebookShare to Pinterest
Labels: Modelling

The West Midlands Military show (WMMS) is organised by Alumwell Wargames Society and is held at Aldersley Leisure centre. It was attending this same show last year that kickstarted my interest in modeling again. The show itself an interesting mix of wargames, model displays and traders. There were some impressive display games in particular one based around Stokesay Castle by a Shrewsbury club, although with some of the exhibition and participation games you do sometimes get the feeling that you’re interrupting someone else’s fun.

There was a fascinating display of real military artifacts including a jeep and motorbike. It isn’t until you handle a genuine firearm that you appreciate just how heavy they are. I picked up a M3 grease gun thinking I could handle it a spud gun and had to put it down after a few minutes.

Another positive aspect of the show was that I managed to meet up with a local model club that I'd previously known of years ago (must be 15+ years). I'd spoken to the members last year time at the show and then promptly lost their contact details.

Overall it's a good show with terrible parking, even if this year I did actually manage to park on site.

This little lot should last me a couple of years.

After I’d given my credit card some serious damage during my two hour visit my brother & myself visited Old Moseley Hall. This National Trust house is just a few miles away from the show. Charles II rested here (i.e. literally hid under the bed) after the Battle of Worcester in September 1641. The highest small window directly above the doorway is where Charles watched the remnants of his Scottish army retreat along the (then main) road back on their long walk home.

Another miniature modified to complete a command group. Pretty easy this one; Confederate Flag bearer, the right arm (holding the staff) came straight off the sprue. Modified left arm, chopped and changed hand. Still trying to decide if to have the chap holding the carbine: 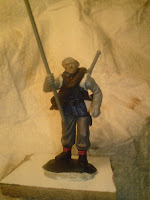 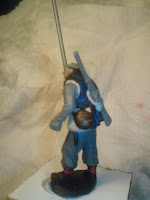 or sticking the carbine to the back of the figure. 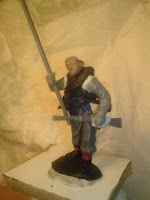 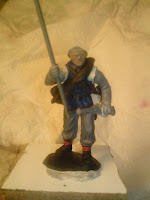 With this figure I wanted to have an alternative to the drummer that is offered in the box. Using a part from the Perry ACW cavalry box I trimmed the cords away from the bugle and drilled out the solid horn and mouthpiece. Wanting the instrument to look slightly battered I didn’t smooth out my tooling marks. The right arm for this figure was relatively easy to modify because separate single limbs are available from the spruce. However the left arm is a different matter. For both the bugle and flag bearer (coming soon) I chopped and changed the standard firing arm poses, removing and repositioning the left hand.

Top - Bugle and right arm straight from the sprue
Bottom - Trimmed down bugle and hollowed out horn. 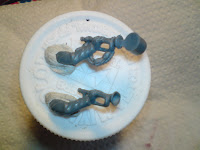 Mock up of the figure. I find it useful to use white tack (less 'greasy' than the blue type) in order to get the 'look' of the figure right before gluing into position. Although looking at it now I might have to trim down the thumb of the left hand unless I try to claim he's a direct ancestor of the Fonz "Aaaay" (sorry, couldn't resist). 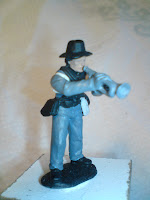 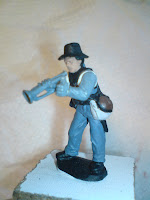