Quick update of work in progress. My brother keeps on buying boxes of these Warlord figures, six of the regular soldiers at the last count and a box of firelocks! On top of those he's also bought a dozen packs of Renegade ECW figures. In order to add a degree of variation I've been busy modifying a number of the plastic mini's. The simplest method of swapping the heads isn't really practical with these with these figures long hairstyles. Pity they haven't got proper 'Roundhead' basin haircuts, would have made my life a lot easier.

Two musketeers below have be modified to be firing firelocks. Original figure bottom right. Made by removing the powder bottles and adding a greenstuff belly box. The chap bottom left has also received a visit from a pair of hair straighteners. Musketeer (on left) given a different pose using the marching musketeer arms. 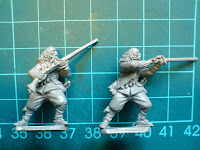 Pikeman figure (unaltered original on the left) given a firelock. Belly box made from greenstuff. 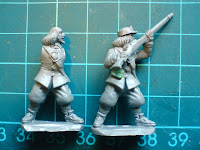 Previously these mini's below would have been a lunging pikemen but with the magic of spare parts and plastic rod they are now musketeers. I've also trimmed down the MC Hammer style trousers on both of these figures. 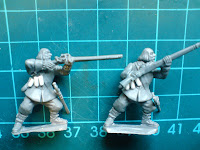 The pikeman below, on the right, will be a flag bearer. He's unfinished at the moment but I've altered the right arm so he will be able to hold a flag pole. 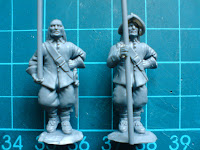 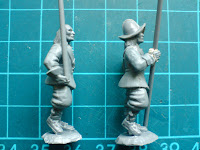 I'm going to concentrate of painting a few of the officer miniatures next as frankly I'm getting bored having to prep all these figures (270+ at the last count). Painted versions should be done in a week or two.
Posted by Ubique Matt at Saturday, August 29, 2009 No comments: