﻿﻿"Hourd - A wooden platform hanging from the top of a wall. An archer standing on it could fire arrows at enemies close to the walls below."
Cadw.wales.gov.uk
The painting muse continues to elude me therefore I've been concentrating on my 'little' side project a model of a great round tower based on Skenfrith castle all this week. After concluding a few decisions regarding the main tower such determining that the roof will be fixed in place I have also decided that the internal floors will be separate (you'll have to trust me on that one, it will all make sense when they're complete). It seemed logical to go the whole hog and attempt to make the wooden hourding (fighting platform).
﻿
Having sorted out those issues I then thought to make the actual hourding completely removable from the tower itself, the idea that I could use the finished model over more time periods, which sounded a clever idea at first but when it came to make the thing I realised it wasn't going to be that easy. The fact that I'd added the semi-circular projecting turret to the main tower and that the whole fighting platform structure had to be made to clear the walls and angular tower roof made things awkward to say the least. Obviously the original wooden hourding (also spelt hoarding) has long since disappeared from the castle, so my efforts have been based on the illustrations from the guide book.

Initially I drew a plan of the tower onto a piece of MDF and planned the hourding onto this. Regular readers won't be surprised that I went about this the hard way. Rather than making the necessary dozen or so main supports in one go I made them as I went along (not recommended), so that they all vary slightly in size, length and angle. As I wasn't actually sure how the entire structure would work I thought it would be better it I made a complete small cross-section before attempting the whole thing. This is why the model isn't exactly symmetrical (it's a weak excuse but I'm sticking to it). Once this was section was complete I worked my way around to complete the ring using PVA glue to act almost as a tack weld on the wooden coffee stirrers so I could pull apart any bits that went wrong. It was around this time I also realised that I would need to make allowances for both the doorway and chimney piece. 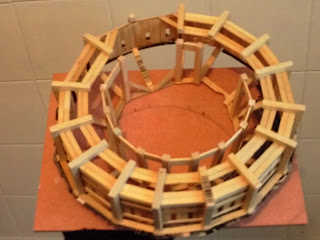 Once I got to the tricky bits, the doorway and the chimney, I made the frame work fit round them with a lot of cutting and carving to the wood work. This also involved copious amounts of swearing, which I find helps. 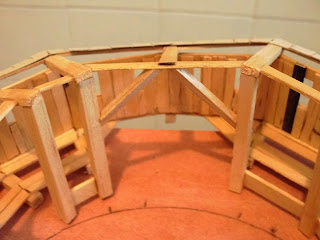 The roofing is made up of cardboard to represent slate tiles. I had considered using coffee stirrers to act as planking, it would have been a lot quicker and easier to produce but as far as I can tell the wooden fighting platform would have originally been more of a permanent feature of the castle. 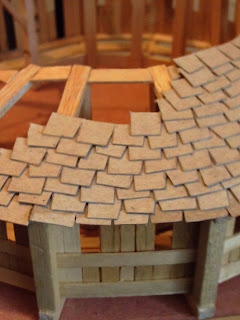 Rather than cutting and gluing hundreds of individual tiles I tried a slightly different method. Instead I cut strips 10mm wide strips from old cardboard boxesets of (appropriately enough) Fireforge and Perry plastic medieval figures. I then cut slits into these strips at regular intervals, cutting a few of the tiles shorter and at angles to add variety, you could make the tiling far more regular and uniform but with mys method it looks more interesting. I had initially covered each section separately in tiles copying the pitched roof of the main tower but thought this didn't quite look right. So I removed these (again with a certain amount of industrial language at my lack of forethought) and instead built up a continuous layer of tiles running around the structure, fixing the strips with PVA glue. Once this had hardened I then 'painted' the whole sections again with slightly watered PVA to help set all the pieces in place properly. This makes the entire thing rigid and fairly robust. This whole process is obviously a quite tedious and boring job but I think it is worth the effort in the end (well I certainly hope so when it's finished). 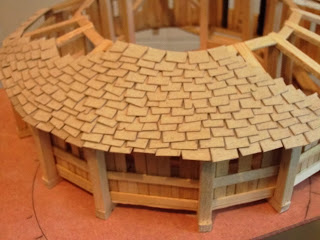 Reconstructions of medieval interiors such as at the Tower of London, Dover castle and St. Teilo's church look surprisingly gaudy to modern eyes so I am considering painted the exterior woodwork in relatively bright colours, which oddly enough my brother had been also been thinking and he suggested red. Hopefully I should make more progress next week on the main entrance and staircase.
Posted by Ubique Matt at Friday, September 14, 2012 10 comments:

Skenfrith castle, along with Grosmont and White Castle (or Castell Gwyn or Llantillo) are known collectively as the Three Castles. Although its not the most impressive of the three (in my opinion that would be White Castle) and it doesn't even have a particularly interesting history (unlike its neighbour, Grosmont) Skenfrith remains one of my favourite castles (yep, I'm an unashamed complete castle anorak). Located in the Monnow Valley in the Welsh Southern March, the castle sits next to the Monnow river which still forms part of the border between England and Wales and flows into the Wye at nearby Monmouth. Its attraction, apart from the fact it's in a beautiful part of the country and it is free to enter, is that it also inspired the castle map/plan in the boardgame Siege, something I'd thought for years and have only recently been able to confirm. As a direct result of a recent visit to this castle, via Cardiff, that I started to build a model of the Great Round Tower.
﻿﻿﻿﻿﻿
﻿
The visible remains of the castle were built by Hubert de Burgh between 1219 and 1232, replacing an earlier earth-and-timber version thought to have been built shortly after the Norman conquest. There may even have been a Roman presence on the site as Roman pottery has been found there during excavations. 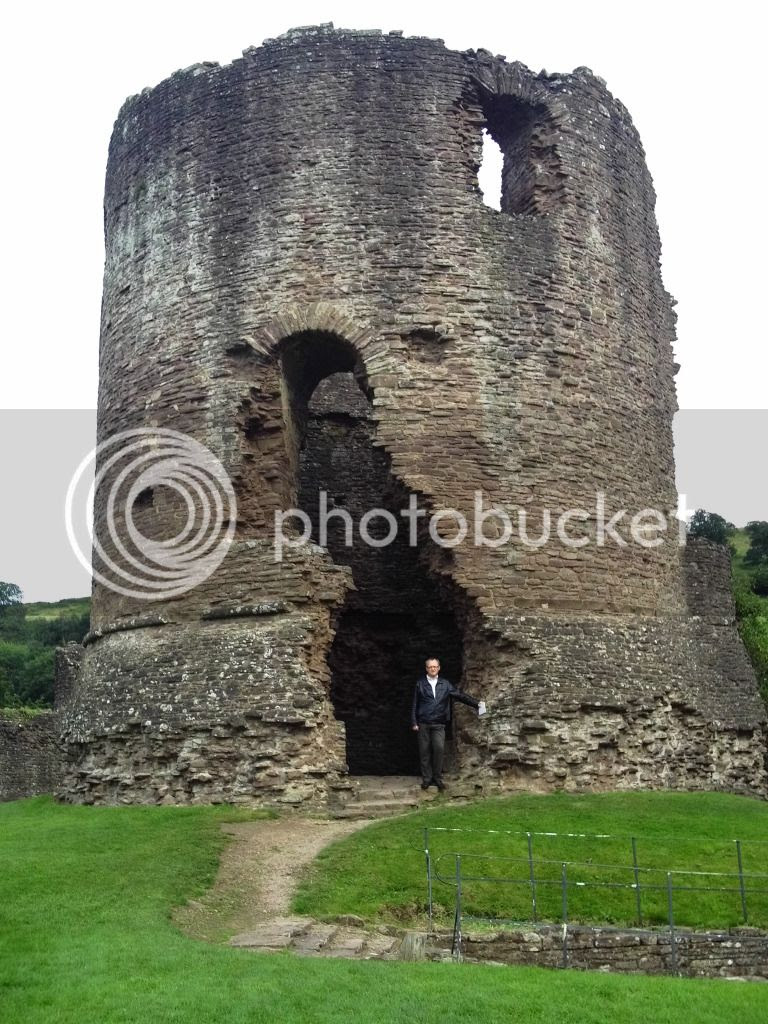 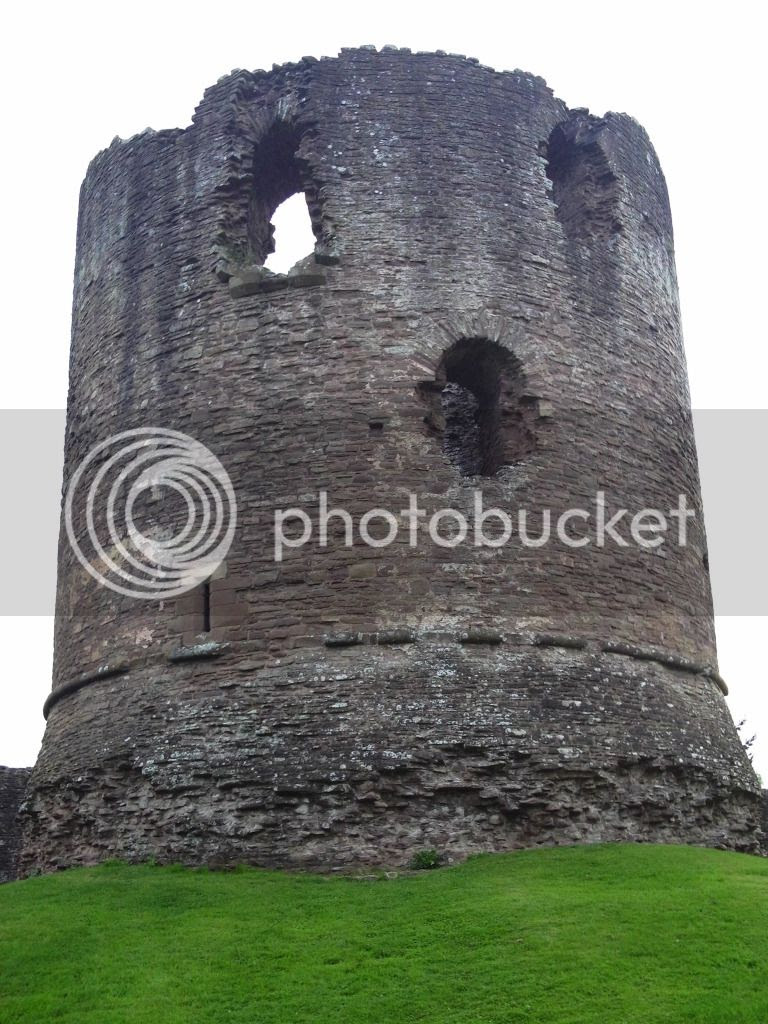 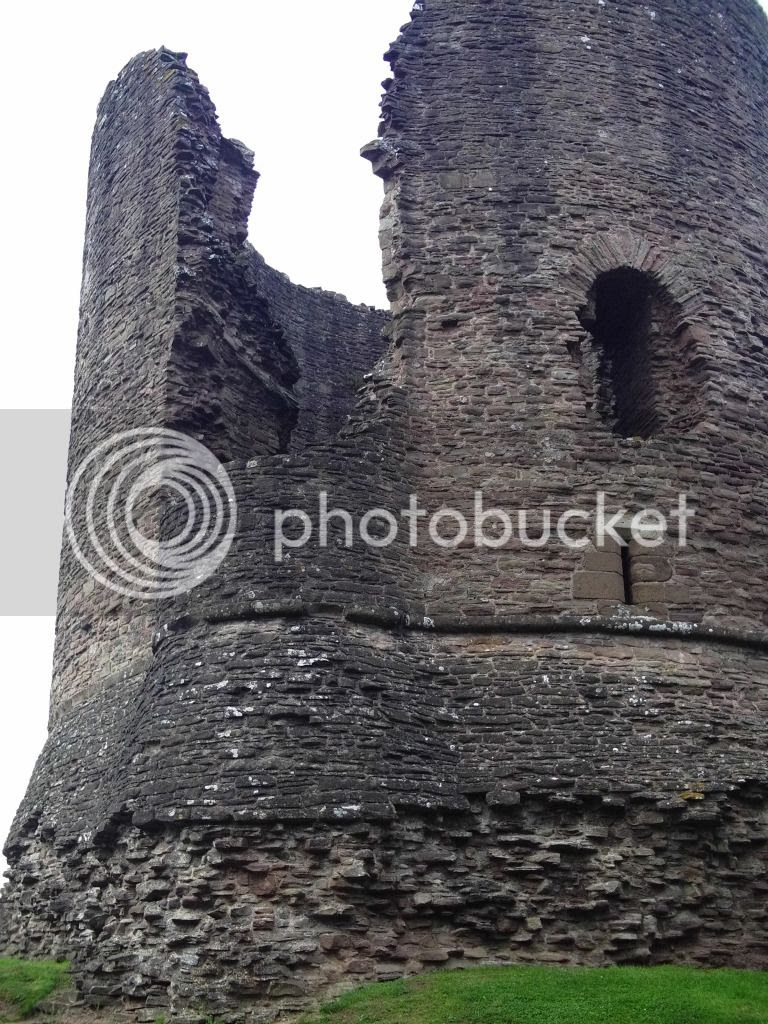 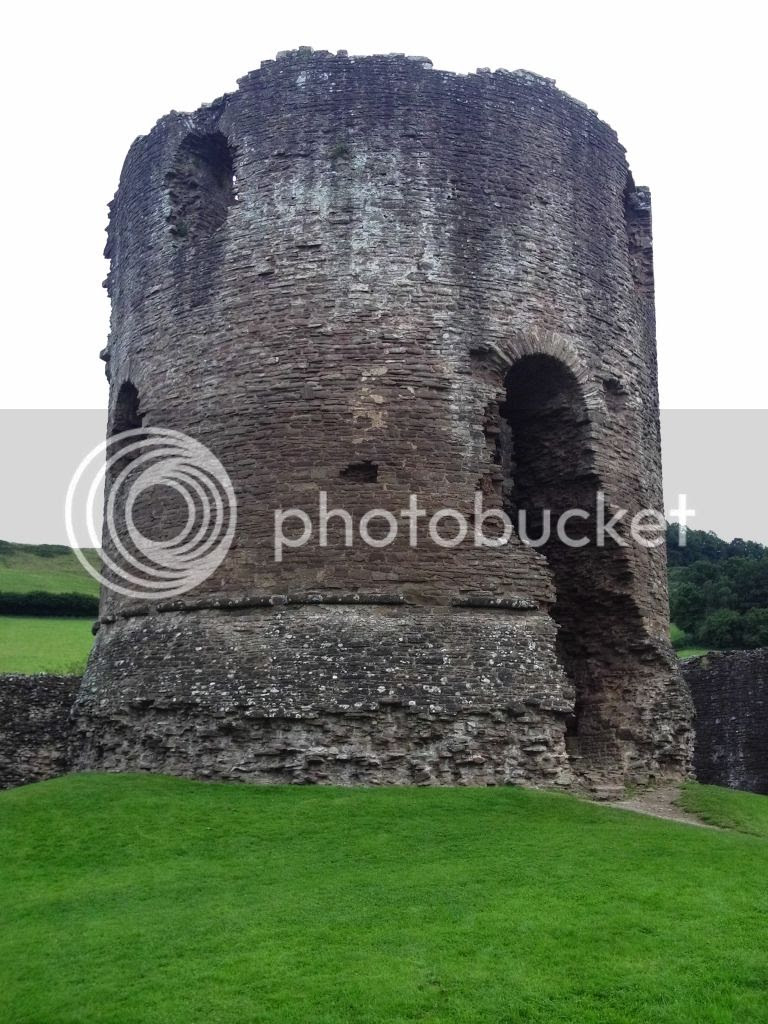 Hubert de Burgh (1175 - 1243) was a veteran defender of the sieges of the castles at Chinon, Loire, France and Dover (1217). It is thought that he was inspired, as were William Marshall and Walter de Clifford, by castles built be King Philip Augustus as they bear a very strong resemble to a series of castles built by this French monarch. Philip Augustus (1180 - 1223) built no fewer than twenty round great towers, generally between 13.5 and 18m in diameter, all so them had three floors and very few arrow slits. A prime example can still be seen in Villeneuve sur Yonne, Yonne, Northern Burgundy, built between 1204 - 1211.

The plan on Skenfrith also resembles the plan of the Louvre of paris, in that it was a quadrangle with boldly projecting towers with a round donjon (keep). The remains of this castle can see be seen underneath the Louvre museum. 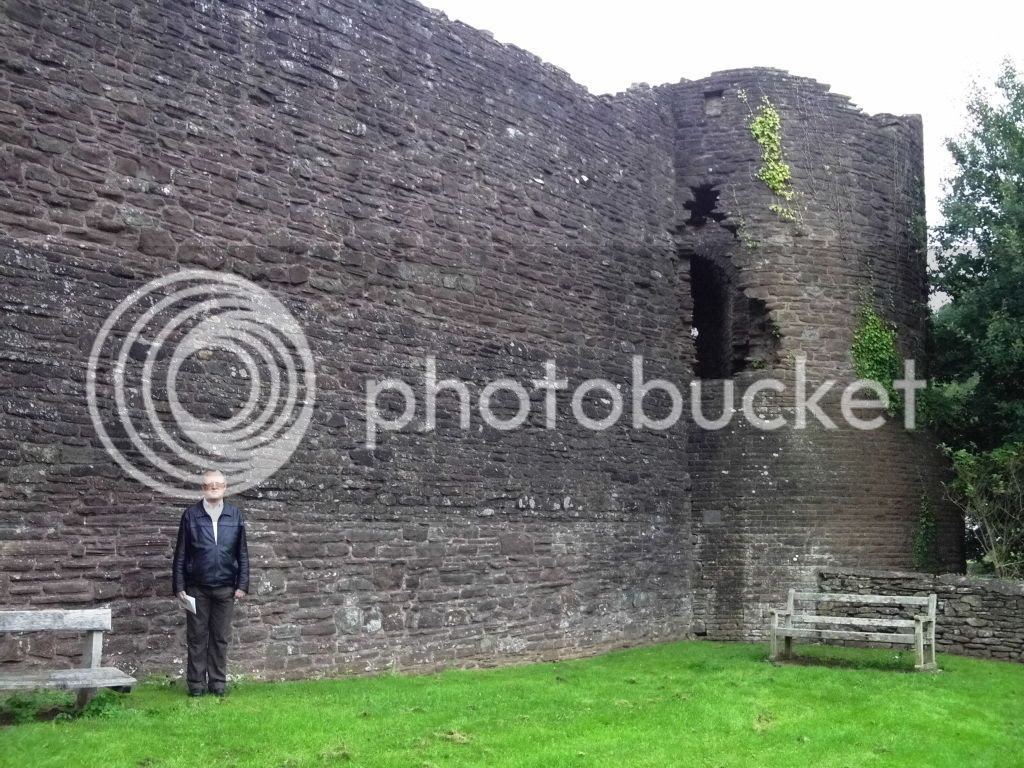 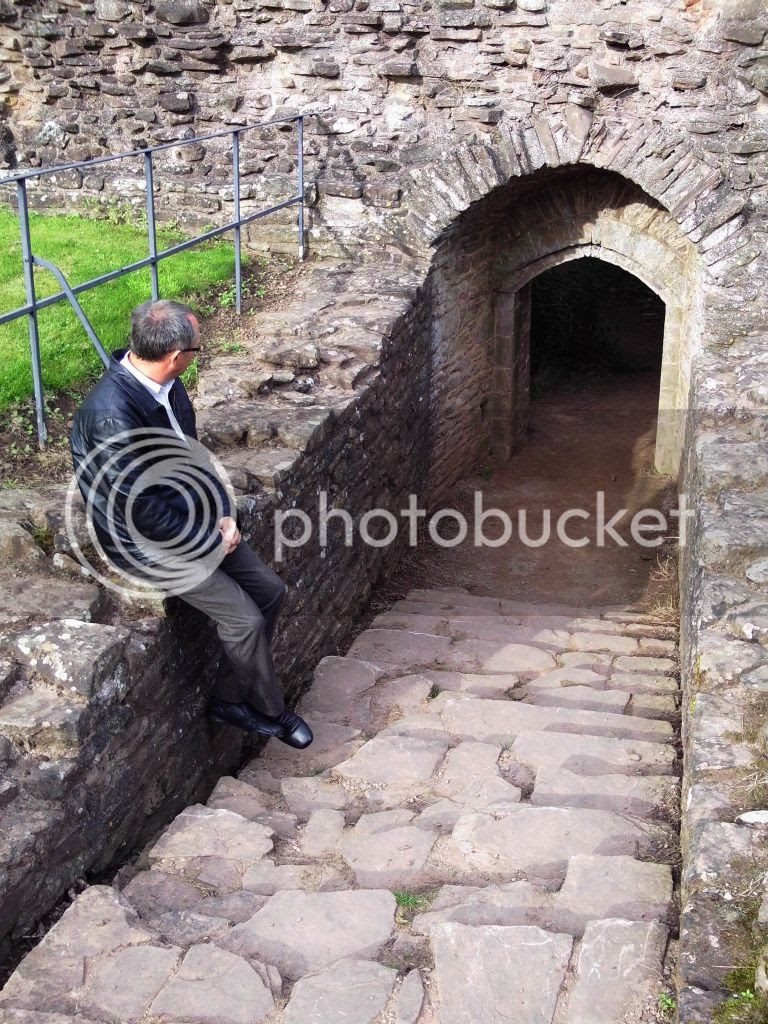 Although very similar to French examples Skenfrith boasts a combination of several design characteristics that are only seen on a very small number of castles, all of them located in Wales. These include Bronllys, Powis built by Walter de Clifford who fought with De Burgh in the Welsh war of 1231 and Pembroke Castle, where the great round tower was built be the famous William Marshall who, not surprisingly, was an ally of Hubert de Burgh.

Three of these distinctive features include:
So if you ever spot one of these features on a castle you too can now bore your partner and/or friends with this useless information :) 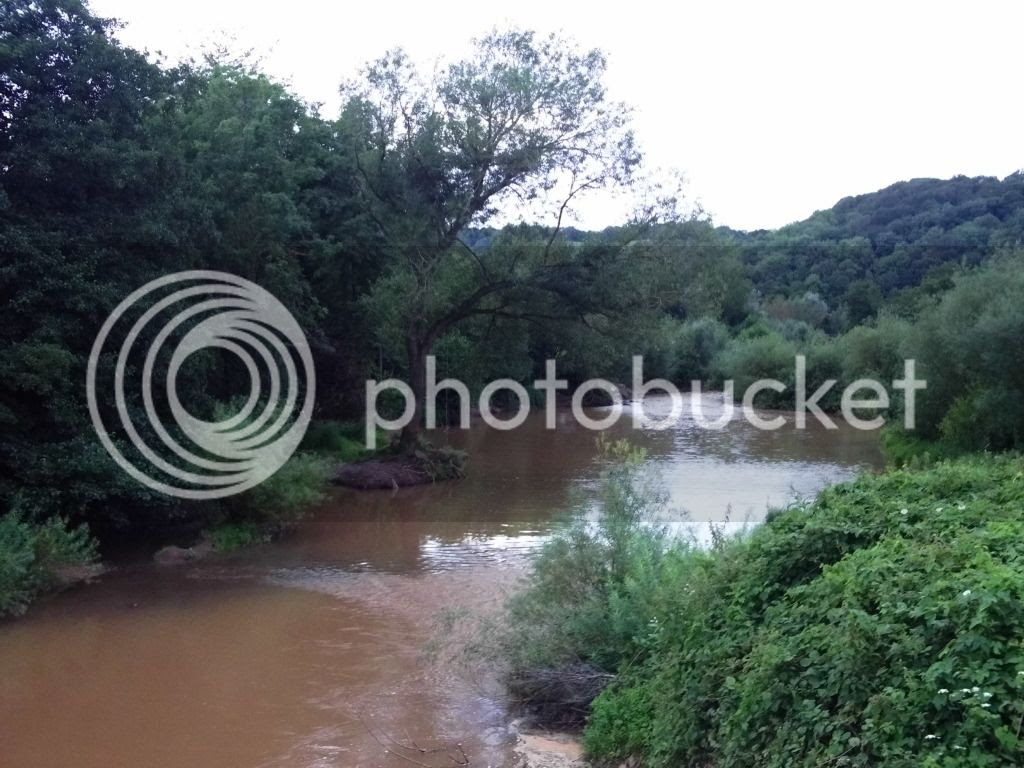 Minnow Rover
Castle just to the left behind the trees. 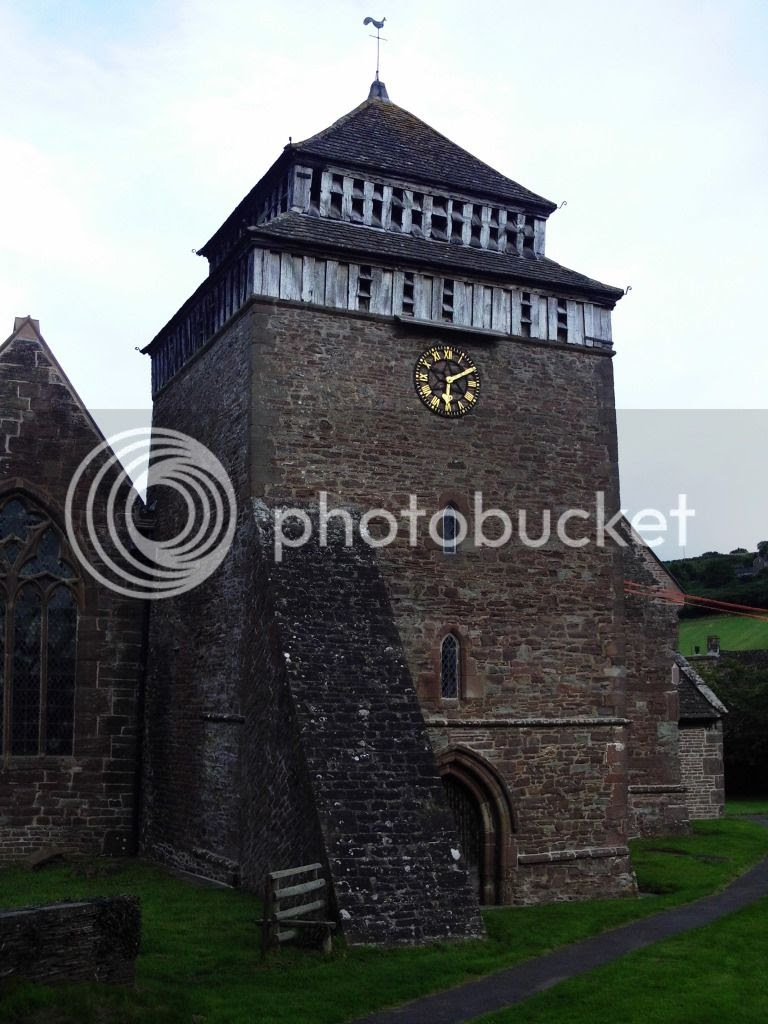 St. Bridget's church
Parts of the nearby church, St. Bridget's are contemporary with the castle. It features a quite unusual tower. There are a number of interesting items within the church which are worth to checking out.

If you have an interest in medieval history Skenfrith, Grosmont, White Castle and Monmouth, birthplace of King Henry V, are all worth visiting.
Posted by Ubique Matt at Wednesday, September 12, 2012 7 comments:

Great Round Tower WIP - It seemed like a good idea at the time..

A.K.A "You're gonna need a bigger boat...apartment" 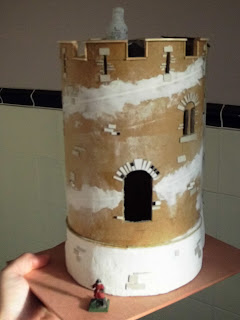 I'm currently enduring a massive hit of what I can only assume is the equivalent of writer's block (painter's/artist's block?). For weeks figures nearly finished are still littering my desk, but I still can't motivate myself to even pick up a paintbrush (literally ). Hence the distinct lack of posts of recently completed figures. It is during these periods I normally resort back to modelling until the painting muse returns.
As I'm sure what is a common trait amongst my fellow modellers/gamers I'm always on the lookout for items I can use to enhance the gaming table, be it coir doormats (they make ideal wheat fields), coarse green scouring pads (hedges), complementary hotel shampoo bottles (chimneys) or even coffee stirrers (wooden planking) etc.
It was in this mindset that I found myself lingering around the prototype area at work with real intent. Working in R&D I get access to some quite random material, one of which is sample rolls of vinyl foil, but it's not the foil that interests me, it's the packaging. Recently one of these samples arrived in a large (160mm dia. x 1500mm long or approx. 6" dia x 4'11" long) protective cardboard tube. Immediately I saw this the cogs in my brain slowly started to tick over because of a recent daytrip I enjoyed with my brother. One of the places we visited was one of my favourite spots in the country. The more I looked at the proportions of the tube the more I convinced myself that I could make a model of the same great round tower of the castle. 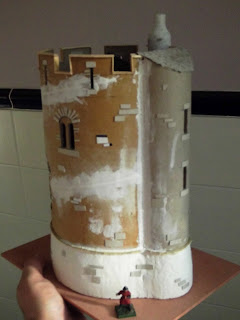 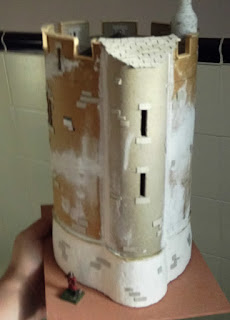 No prizes for guessing the name of the castle but you will get massive kudos from me if you do. The real castle features a combination of several design characteristics that are only seen on a very small number of castles in the UK and all of these are located around one particular region; the inspiration for these castles is thought to have come from the owner/builder's experience of campaigns and sieges in France. It forms a well known group with two other nearby castles. Another clue, and more significantly for this blog is that it was actually the real life inspiration for the castle map from the game Siege, which I always suspected but was only recently confirmed (Gawd bless the internet) when I read an online interview with the game's designer. Or you can wait until next week when I will post photos of the real thing. 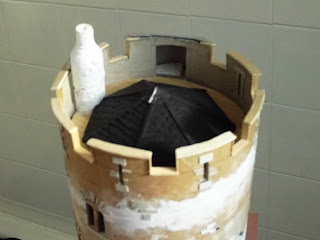 The only problem is its size. The more I look at it, and work on it, I repeatedly stop and think to myself, "Oh blimey, I may have bitten off more I can chew with this big bugger." I still have a number of decisions regarding the piece, such as:
Posted by Ubique Matt at Friday, September 07, 2012 11 comments: