Battle Ravens is a brand new boardgame created by Dan Mersey and produced by the Plastic Soldier Company (http://www.pscgames.co.uk/). Apologies to both as I received this pre-view copy a few weeks ago but I haven’t had the time to talk about it until now, better late than never I suppose. The game is currently running on Kickstarter, it has already been fully funded so the game will be despatched to everyone to backs the campaign, along with the relevant stretch goals.


As with other games by Dan these rules appear deceptively simple, but once played it soon becomes apparent that no two games will play the same. Typically for the very first game I failed to read the rules properly (the same reason I still make plastic models kits and then wonder why they didn’t fit together correctly or why pieces are left over). Everyone I played has been able to play the game within a few minutes of starting.

To play you line up your army within the six main blocks and try and smash through the opposition’s shieldwall. It sounds easy but using the Raven tokens enables you to attack, block or move allowing enough variation to make every game unpredictable and enjoyable (even though I’ve lost every single game I’ve played so far). Therefore one stand (berserkers?) could possibly defeat a superior numbered (nine stands max per block) opposing group. To win you ‘simply’ have to break through three areas of the enemy shieldwall. Attacks and blocks are achieved rolling 4,5 or 6 on a D6 with a 6 counting a double hit. The number of dice rolled is determined by the number of raven counters you choose to use.

There are also advanced rules which involves using tactic cards for each army. These enable you to fight in a specific manner i.e aggressive Norse, defensive Anglo-Saxon but you can choose to field the same army as you opponent, Norse v Norse etc.

There are several subtle aspects to the game which I won't reveal here, I'd rather players discover these for themselves.

The playing pieces are drawn by Peter Dennis, my favourite military illustrator (I'd like him to adopt me even though I believe he supports Mansfield FC). The preview copy has Anglo-Saxon and Norse armies from his 1066 paperboys book. Anyone familiar with these will recognise the style straight away but these playing pieces are printed on heavy cardstock paper. The Kickstarter has stretch goals for extra armies for the Normans, Scots, and Welsh. 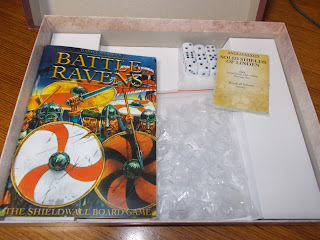 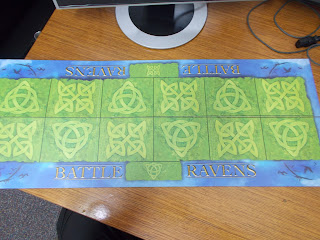 There are understandable limitations to the game; for instance you can’t attempt flanking attacks once you break the shield wall. Although I imagine the game would rapidly culminate if this was an option (I can lose enough games as it is). Games typically last 40-60 minutes.

Please note that this is a preview/review copy, supplied free of charge by PSC Games. This means that the final edition may be slightly different from the images shown here although I can't imagine it would be much different.

If you’re looking for a quick and easy Dark Age themed boardgame where you can crush and humiliate your sworn enemies (well ok, probably only if you’re playing against me) then I’d recommend you take a closer look at Battle Raven but be quick as the Kickstarter campaign only runs until 6th December 2018. The game is due to be released in April 2019. The retail price for Battle Ravens will be £35, but it will be available for £30 through Kickstarter with the Scottish army pack now included for free.

At the time of writing Stretch Goals 1, 2 & 3 have been unlocked which means tactic cards for the armies, a mounted board and more dice, which is more or less what you can see in the images here. Every Kickstarter pledge level will also include a Scottish army (not shown).

I may try a variation of the games using medieval figures but I’ll detail that in a future post.
Posted by Ubique Matt at Friday, November 30, 2018