This first post (and at the current rate possibly the last) of the year about the last show of last year, Wargamer is one the smallest but also one of the friendliest that I’ve attended recently.

The minimal programme had a list of traders and clubs but didn’t have a map to help identify who was who. The venue isn’t that big but some of the games were difficult to identify, so apologies if the following photos have no labels. The leaflet does list several model/hobby ‘brick & mortar’ shops which is useful. Even the days of the seemingly all powerful Google there are still several shops that have little or no online presence.

Another thing about the programme was that didn’t list the participation games, which is a personal bugbear. My brother and myself try to make a point of playing as many participation games as is possible. We’ve noticed that playing participation gamesis the only thing we tend to remember about a wargame show as all the traders/shows tend to merge into one after a while.

There seems to be two obvious types of people who put of display/participation games, the social and the anti-social. Although, of course, this is a sweeping generalisation it’s one that rings true to me. I appreciate the appeal of being able to play large games with massed ranks of figures with a number of your friends at a show. However these are also the type of games I will probably never play as I don’t have the time, finance or space to commit to to them. I can understand people becoming engrossed in a game but at least have one ‘ambassador’ to speak to the public or any one that shows an interest. I must admit, thankfully, anti-social gamers seem to be decreasing in number. This is especially true at this show where practically everyone either encouraged us to have a go at a game or at least described what was going on and were very keen to share their enjoyment of the hobby.

There a few things I would have done differently with a number of the participation games if I was hosting, but seeing as I’ve never ‘done’ a proper demo at a show I’m not really in a position to criticize. I have provided demos of the Lion Rampant series at local stores and clubs but that isn’t really the same thing. The chaps providing participation games put themselves out to try and engage with perfect strangers and deserve all the credit they get. 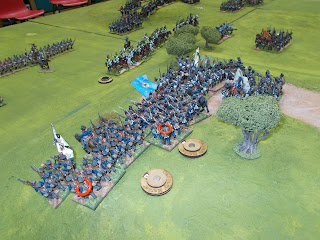 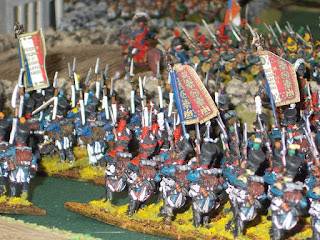 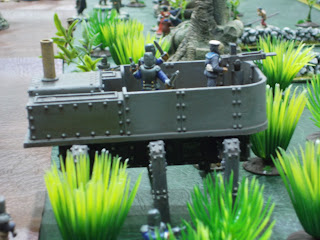 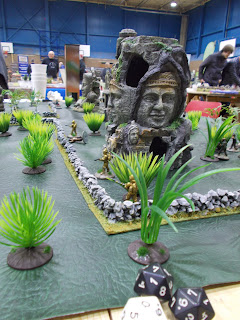 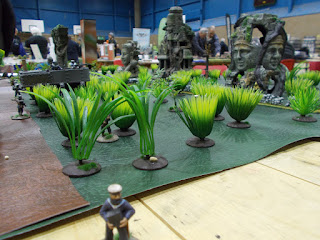 This was some form of Victorian steampunk beach invasion. 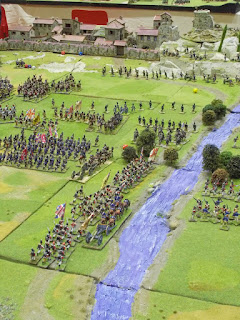 A board game based on the film ‘Monty Python and the Hole Grail’. After picking a character you then had to gather equipment from various stops along the board. The hardest part of the game was trying to remember the film references as neither of us had watched the film in years. Coconut shells were provided to create the appropriate sound effects. 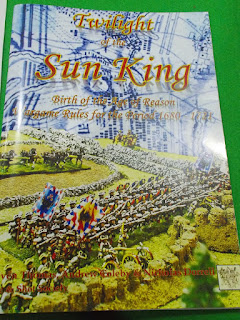 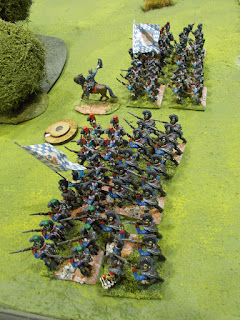 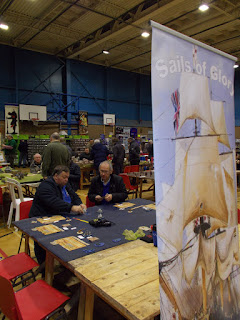 Dark Future – an old game from Games Workshop, obviously based on Mad Max films. My brother played this one and managed to outrun the pursuing car, making it spin and roll out of control on the second corner.

Eat Hitler – another game from the same chaps that put on the Custer’s Last Stand game we enjoyed playing last year. The idea was that Nazi scientists have created a time machine and have transported themselves back into the age of the dinosaurs. participators played the dinosaurs and the aim of the game was to try and eat as many of Hitler’s henchmen as possible. There may be a return match next year in the streets of war worn Berlin. 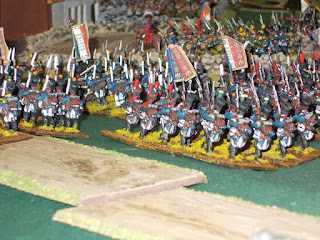 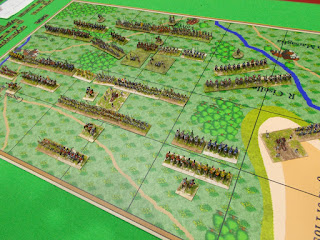 As is customary for any gaming blog there is a list of the rather minimum purchases from the show:
I’m not sure if this year’s show was a financial success, there seems to be less traders than last year, for instance Wargames Foundry were not present after making an appearance at the previous show. Hopefully the show will still be on next year’s calendar.

And if you've made it this far, thanks, I'd like to wish followers and readers a belated happy new year.
Posted by Ubique Matt at Thursday, January 05, 2017