Oh hello, fancy seeing you here. It’s been a long time since I’ve posted anything (almost a year in fact and well over a year since I’ve posted any new models or painted figures. There are two main reasons for this. Firstly, as I’ve hinted before, a lot of my spare time is taken up with dancing (Latin and ballroom to be precise). I’ve been fortunate enough to be able to compete at the Winter Gardens in Blackpool on several occasions which most, if not all, dancers aspire to. I managed to pick up these modest baubles (below) at my last comp (yes, they both could be used as a substitute for the mace in Parliament if a rogue MP ever decides to cause a by-election by swinging at someone with the current one).

Over the last few months I’m now concentrating on becoming a teacher rather than competing, but this also has it consequences. I’m generally not intimidated by people or situations but facing a dozen or so mature ladies, on my own, expecting you to teach them the basics of dancing genuinely gave me the willies. 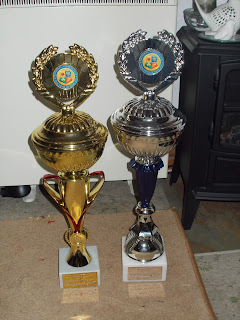 The second reason is that I started a new job. After a change in circumstances at work I realised I had to get out of my comfort zone. This job involved an awful lot of driving. On the rare occasions when I travelled with a colleague I would often fascinate them with 'interesting' historical facts along the way.


Some notable (and all genuine) conversations included:


Driving past Portchester castle “That’s were Henry V sailed from to fight at the battle of Agincourt.”


"Over there is Meadow Lane stadium, home of Notts County, the oldest association football team in the world."
“That’s Windsor castle, you know, where the Queen lives.”


Admittedly the level of interest and knowledge of British history amongst my colleagues tended to vary. Well, not vary as such, more often non-existent.


Occasionally I visited places that, as a member of the general public I'd never be able to access. This included the roof of St. Thomas in central London, which as you can see is right next to The Shard.


The amount of time I had to play with miniatures has been greatly reduced but I have made some progress with figures, especially for a new set of rules (Rebels and Patriots) from Dan Mersey and Michael Leck. Hopefully it won’t be another year until I post again.

Sharp-eyed readers may have noticed that I refer to this 'new' job in the past tense; this is because I was laid off recently. Ironically it was very likely that I would have quit within a few months anyway as the job I was asked to do wasn't the one I applied for. I'm hoping the will be a blessing in disguise as now I might be able to get my social live back. I'll certainly have more time to paint some of the massive backlist of figures I have.
Posted by Ubique Matt at Thursday, March 01, 2018