"And now for something else completely different...."

When I first started this blog many years ago I mentioned that one of the reasons I got back into modeling and painting was a reaction against computer gaming. Wasting hours in front of a computer monitor struck me as being a pretty soul destroying, and ultimately pointless. experience. At least playing games with figures I would have something tangible to show for it. Admittedly not that many people are impressed by a box full of toy soldiers but it keeps me occupied.
As my mates over at WargamingForFun seemed to be having far too much fun playing the Warhammer Fantasy rules I thumbed through the rule book. What caught my eye was the Empire army. It seems obvious that they are based on late medieval/early renaissance period continental armies. This time period has been a long time interest of mine and was recently renewed after I read about Martin Schwartz, the German mercenary who fought at the Battle of Stoke Field in June 1487 (an excellent book on the subject, ‘Stoke Field - The Last battle of the Wars of the Roses’ by David Baldwin is worth tracking down). I have even convinced myself I could combine the figures with my Perry WotR miniatures (another long term project). After all, it’s always more fun to play with someone else than play on your own (insert your own puns here).
The original greatswords, the German Landsknechts, would have used the massive Zweihander swords (literally ‘two hander’, they were also called Bidenhander - 'both hander') to lop of the heads of the enemies pikes rendering them into useless overlong broom handles.
The quality of the figures is naturally first-rate, as you’d expect. The figures offer multi-optional poses allowing you to create unique units and being plastic they are very easy to modify. These Greatswords are £25.50 for a box of ten figures (blimey missus, £2.55 per figure). Of course you can always pick up some bargains on eBay. A friend recently bought a complete dwarf box set at 40% off the list price. We assume the purchaser opened the box, realised you had to assembly and paint the figures yourself and put the entire lot straight up for sale - bargain.
The first job is to clean up the figures and remove all the moulded skulls and comets that crop up all over these miniatures. This is easier said than done; sword guards, pommels, finials, hats etc. you name it GW will stick a skull on it!
Once this was done the hardest part then is deciding what colours you want to paint them. The uniform seen here isn't based on one of Game Workshop's Empire province armies. It is however based on the very real Papal Swiss Guard. The Guard is one of the oldest, and smallest, standing armies in the world. The guards can often be seen in their ceremonial uniform on duty in the Vatican. They certainly look distinctive and leave a lasting impression. The blue, yellow and red uniform of the Guard is based on the family colours of both Pope Julius II and Pope Leo X.
In keeping with the righteous theme the banner is based on the evangelist symbol of St Luke, the winged bull. It was going to be St. Matthew (for obvious reasons) but I can't paint angels. Apart from the removal of the skulls and comets the only other noticeable modification I made was to the figure carrying the axe. Here I simply cut off the hand holding the axe and rotated it to give a more natural looking position. 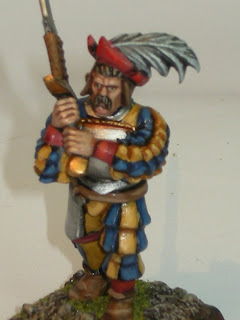 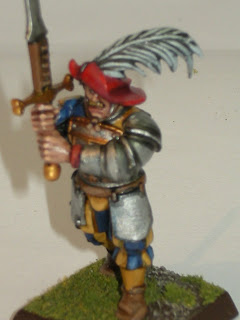 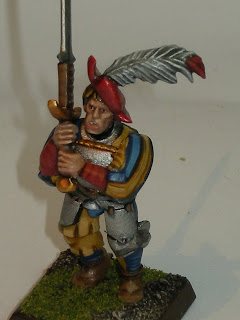 The figures are all based individually as is normally required when using Games Workshop rules.
Posted by Ubique Matt at Monday, September 05, 2011