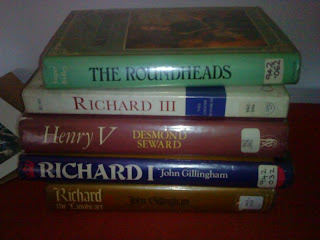 I found myself in Dudley town centre a few weeks on a Saturday morning and as I had some spare time before the castle & zoo opened I visited the local library. My brother has, in the past, bought a number of historical books from there as they tend to sell off old stock i.e. old Haynes car manuals and romantic novels (same thing really). However if you’re prepared to rummage then you can pick to a few interesting titles. In a small reading room there’s a sign stating that it’s a pound for as many books per bag (you have to bring your own bag).

I bought the following (all for one English pound – bargain!).

‘Life and Times of Richard I’ – John Gillingham

I even popped out to get a plastic bag from WHSmith so that bumped up the overall price to £1.01. I had to leave two other books as I don’t think the bag could take the strain. I’ve only managed to read ‘The Roundheads’ book so far. This deals with the main Parliament (obviously) characters involved in the conflicts of the ECW, their actions during the commonwealth and their lives after the restoration.

In particular there is a fascinating account of John Lambert; a tragic character who after being judged by his former colleagues spent decades in prison slowly going mad. Another character detailed is Admiral Blake, who, I have to admit I’d never heard of. Blake was one of the most successful military leaders, naval or otherwise, in British history. It’s definitely worth popping into your local library even if just to read the Saturday papers for free and you might even pick up a bargain or two.
Posted by Ubique Matt at Tuesday, April 27, 2010 1 comment:

I spent some of the previous evenings setting up all the ECW figures I have (and there were far more than I imagined, especially cavalry). There is a method to this madness. I can now work out how the group the figures together and reduce as much repetition as possible. It also gives me a good idea just how long it will take me to paint this lot (at least a year I reckon). Hopefully they will be done before:
a) I go mad,
b) I am declared bankrupt for buying too many toy soldiers (I doubt my bank manager, Trevor, quite understands what a 'lead/plastic mountain' is),
c) my eyesight fails,
d) all of the above. 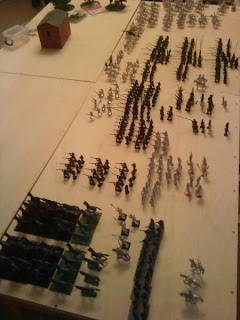 This image doesn't even show my Newcastle figures or the frame gun.

The black primed figures are Warlord Games. The rest are a mixture of Renegade, Bicorne, Essex and Perry. There is a surprising difference in size with the figures for what is supposedly the same scale. For example Bicorne & Renegade Miniatures are both considerable taller than their Warlord and Perry companions. However as long as I don't place these figures on the same bases I don't think it's a major issue. After all you could easily play with just the bases but it certainly wouldn't look as pretty and from a few feet away it's hard to see the difference.

March has been quite an interesting month for me involving several enjoyable days out. First up was a trip to the east midlands. This started with a visit to an open day held to promote the new Black Powder rules at Maelstrom Games in Mansfield. The premises are still ‘work in progress’ with the shop under the main playing room. One of the two adjacent buildings are used as a stock room, the other appears as if it will be used it as an additional playing area.

The products on display are available with a decent discount of 10-15% although this isn’t immediately obvious as they do not have any prices on the items.

The distance to the shop, just over 55 miles away, means that I won’t be able to regularly visit though my friend recommends their mail order service after placing, and quickly receiving, a large order with a considerable discount.

I can’t comment of the new Black Powder rules as I didn’t manage to play but it’s always nice to be able to put names to faces regarding the Warlord Games staff. My accompanying friends are more into Warhammer Fantasy so we ventured south towards Warhammer World, the headquarters of Games Workshop (GW) in Nottingham. Located on an industrial estate, the showrooms and playing areas are based in a factory unit. The painted miniatures on display are definitely worth seeing. There is a shop on site where we were ‘mugged’ three times in ten minutes by the professionally over friendly staff,

“So what army are you working on?”

“Err.. exactly the same one I just told those two blokes about”.

I didn’t say this obviously as I’m far too polite. It’s apparent that there are stock phases taught to GW staff during their training. Another method seems to be placing the appropriate product in your hands - think of the opposite of when your mom used to remove sweets you sneakily placed in the shopping trolley hoping she wouldn’t notice until you arrived at the till. Clever Jedi mind tricks but a little tiresome after awhile.
I was a little surprised that the shop doesn’t have the complete range available on display; although they are available on request if you’re prepared to wait. A missed opportunity I would have thought from such a commercially focused operation like GW. After mentioning where we'd been earlier one staff member admitted that Maelstrom offer cheaper prices than normal but then quickly added that Maelstrom don't carry a full range of stock (just like their own shop then).

Also in March was the WMMS show organised by Alumwell Wargamers which is probably the biggest show of its type in the West Midlands. In attendance were my local club, Pensnett, which is a ‘proper’ old fashioned modelling club (in the sense of making plastic model kits, scratch building and painting large scale figures). With my limited finances I still managed to spend about £70, including renewed membership of the Lance & Longbow Society. Main purchases consisted of metal Perry miniatures from their EWC and new WotR ranges. A highlight of the show was a game put on by the Leamington Spa Wargamers group. This was an impressive Elizabethan game based on the film ‘Where Eagles Dare’. Trust me; it made sense when you saw it. They deservedly won the "Best Painted Army" at the show.

Managed to paint twenty figures and finish the star fort I made last year. I also did a lot of prep work on numerous other figures but I think I need to focus and paint more regularly. Another post about my ECW efforts will be posted shortly.
Posted by Ubique Matt at Thursday, April 01, 2010 No comments: