The matching pair of figures detailed in this post have been painted to represent Peter of Dreux, Duke of Brittany, based on the Richard Hook illustrations of Peter in the Osprey book 'The Crusades' (Elite Series E19). 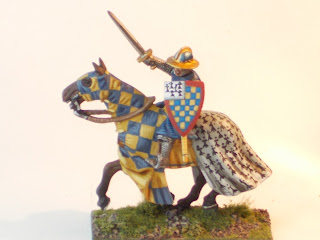 The livery of Peter of Dreux is alternate squares of blue and gold (designating the house of Dreux) quartered with ermines (representing Brittany), or to be precise 'Chequy or and azure within a border gules a quarter ermine'.

Regarding the model itself I had noticed that fortunately one of the plastic Fireforge mounted sergeants and one of the metal Crusader knights matched each other and bore a close enough resemblance to the illustration to represent this character. 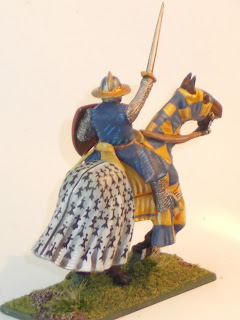 Please note that I intentional didn't fit the horse's tail piece on this model and I'll explain why. I read an interesting discussion on the Fireforge Games Facebook page, where someone pointed out something I'd never noticed before. To paraphrase, someone basically said, "On all the medieval illustrations of fully barded horses the horse's tail is covered and is not visible." Out of curiosity I double checked all my image reference books and was slightly surprised to find that I couldn't see any that showed the tail on a fully caparisoned horse (if anyone can provide a contemporary medieval illustration/glassed glass image or reference etc. showing otherwise I'd genuinely like to see it, it would save me a lot of work in the future!).

I thought it may be an interesting challenge to make and paint a proper fully barded horse. The problem with this approach is that it left me having to fill a large gap at the rear of the model where the caparison/barding is modelled flapping open. This issue was solved by using a thin sheet of greenstuff and blending it in as best I could to match the folds before it set. 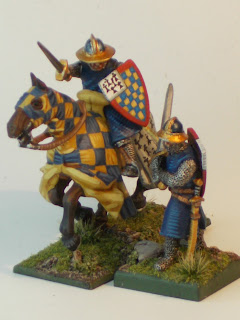 As the mounted figure is depicted as having drawn his sword I cut away the hilt, grip and pommel of the sword the scabbard on the figure's waist. I also cut away a small section of the material from the area beneath the saddle area so as to create a similar look to the one show in the Osprey book.

Obviously one the initial attractions of this character was the eye-catching heraldry. However attempting to paint it may, at first glance, appear quite intimidating but the final appearance is actually more down to using simple techniques than any artist skill on my part. I will however freely admit it did eventually prove to be a bit of tough bugger to paint (all this after saying in a previous post that I was sticking with simple geometric designs). 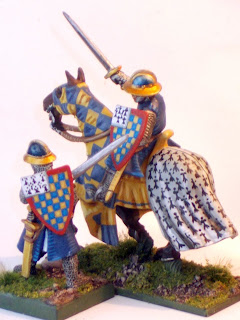 After the base colours, yellow at the front and the off white/grey for the rear, were applied I then used a small, square single piece of cardboard loosely stuck to the model horse with Blu-Tac. I lightly traced the edges using a H6 pencil, repeating the pattern until the front half of the horse was covered with faint grid lines. With the tricky areas around the neck and head I simply drew the lines in by eye. I used a H6 pencil for this as it is traditionally used to create trace lines, the hard lead produces a very fine, faint line (being a draughtsman by trade its nice to be able to return to using a pencil instead of a computer). Once satisfied with the pattern the alternate squares were painted and filled in with blue paint.

For the ermine pattern once again I traced in very faint horizontal lines across the whole of the rear of the horse. Then using the horizontal lines as a boundary guide I painted in short black vertical lines. Once that was done I then painted an inverted V at the bottom of each line. I tried to paint the three dots using a brush but repeatedly made a mess of it. I eventually tried using a cocktail stick, dipped the tip into black paint and placed the three dots on top of the vertical line (although I'm still spotting the odd one or two I missed). I'm not particularly looking forward to painting the wounded/dead version of the same figure if I ever get round to it (I might just cheat and stick to using generic casualty markers).

The dismounted figure is from the 'Knights with Big Weapons' pack (MCF003) by Crusader Miniatures and is painted straight out of the box i.e. no modifications were made to the figure. 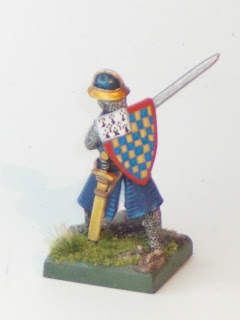 Unfortunately neither illustration in the Osprey book (unusually the artwork on the cover is not replicated inside the book) shows his shield but a quick search using Google 'all hail' Images soon revealed the appropriate details.

With hindsight I should have added the greenstuff to repilcate the fancy strips of material that form the sleeves in the original illustration but this only occurred to me after I'd starting to paint the figure.

This figure is a substitute for Sir Conrad in the Cry Havoc game who carries a yellow and blue checked shield and whose horse has a matching caparison.

In an interesting historical footnote Peter of Dreux's original sword pommel, displaying his coat of arms, actually turned up for sale in Damascus a number of years ago. Peter had been wounded at the battle of Mansourah (February 1250) where he had fought with Robert of Artois, the Master of the Templars. He was taken prisoner along with King Louis and other barons. He later died as a result of his facial wounds. The pommel is now in the Metropolitan Museum of New York.
Posted by Ubique Matt at Friday, July 27, 2012