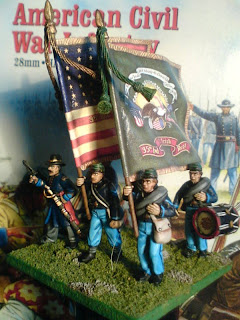 After feedback from those rather nice chaps from the TMP website I’ve altered one of my command groups. Armed with my trusty craft knife I attacked the 35th Regiment Indiana Infantry command base last night and rearranged the figures and then reapplied flock. The new arrangement now seems obvious. In fact all the illustrations I’ve seen show flag bearers as leading the way. As usual I’m slowly but surely learning from my mistakes.

I’m now not sure what to do with the other 4 figure command base. The only proper solution would be to reapply them to a larger base with two other figures. The only problem is that would leave me with two miniatures floating about on their own which may look odd.
Posted by Ubique Matt at Wednesday, April 29, 2009 1 comment: 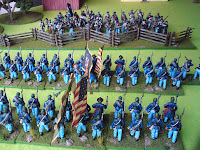 As a beginner I won’t recommend anyone trying to do what I did; painting over a hundred 28mm miniatures from scratch. In my youth I used to paint one off, large scale (54mm plus) figures. In fact the Italeri 1/72 scale AWI French infantry were the first small scale figures I’d ever painted here. Seeing all those blank figures in front of you can be intimidating (just like the real thing - if you’re scared by tiny little people with big hands armed to the teeth, that is).

After a fair bit of research I purchased three boxes of Perry miniatures directly from the manufacturer (very good service). This provided me with one hundred and eight figures in total. Equally divided between the Union and Confederate armies this gave me one command group of six figures and twelve blocks of four figure groups for each army. Using a CAD package to work out figure basing and ‘deployment’ I was surprised how much this preparation helped me later on.

The miniatures only require a small amount of assembling but this also enabled me to carry out a few modifications. Initially I went for a mass production line approach trying to paint all figures in one go i.e. all the jackets dark blue then all the trousers light blue and so on. With the Union figures this proved too daunting as progress seemed painfully slow and demoralising. Further down the ‘line’ progress improved rapidly as the figures were finally completed one after the other. 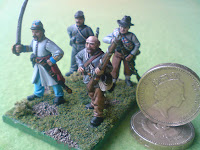 I’ve refined this method to block paint between six and eight figures at a time and then finish the highlights, shading and detailing etc. From a practical point of view this also helps prevent paint from clogging up my brush but it also prevents me from getting bored too quickly.

Overall I’m pleased with my first 28mm project and I’ve learnt from my numerous mistakes. In particular I need to improve on painting faces; most of my miniatures so far tend to look like they’ve just smelt something rather unpleasant, been given a severe wedgie or have turned into zombies.
Onwards and upwards.
Posted by Ubique Matt at Friday, April 24, 2009 No comments:

From what I’ve recently read the old clichéd image of Confederate troops portrayed as wearing various colours and styles of uniform is largely historically inaccurate, especially so during the early period of the war. However I rather like this traditional image and thought it would make a nice counterpoint to my Union troops ‘factory fresh’ style uniforms so I decided to paint the Confederate’s to represent battle weary veteran troops.

My brother lent me a very interesting book 'Brassey's History of Uniforms American Civil War: Confederate Army.' Of particular note are the illustration's by Richard Hook. One in particular shows soldiers from , ’s Legion, Washington Light Infantry Volunteers Co. A. at the Battle of Seven Pines in 1862. 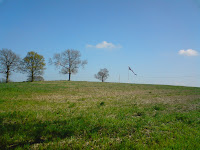 After visiting the Hinckley model show where I bought a few bargain second hand books and meet up with the Pensnett model club. As it was a beautiful day my brother and myself decided to travel to nearby Bosworth battlefield.

The new refurbished visitor centre is located on the traditional site of the battle but as the centre honestly admits, there are at least two other possible sites, although all of these alternative locations are all with a few miles of each other.

One of the several highlights include four life size figures in the main display that depict Richard III, Henry Tudor, a man at arms and an ordinary foot soldier.

A clever display, as you enter the main hall, allows you the handle various swords and pole arms while remaining securely fixed to the wall. Good job really, seeing how clumsy I can be. I even managed to walk into a tree later in the day.

My personal favourite display was on the opposite wall. Here it’s dressing up time again. Various authentic helmets, sallets, bevors, padded jackets and a breastplate are available to handle and wear (if you don’t mind looking like an idiot, so obviously I tried them all on). Surprisingly, after just a few minutes, I was feeling claustrophobic. Heaven only knows what it must have been like to wear and fight in all that gear on a hot summer’s day.

The standard of the visitor centre is very good. They have also kept the excellent mounted model figures of the two main protagonists and standard bearers in the main entrance. I can also recommend the ice cream available from the tithe barn, in particular the rum & raisin (massive raisins). 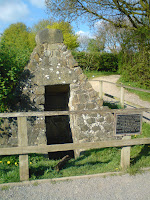 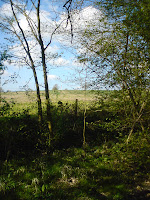 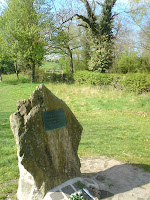 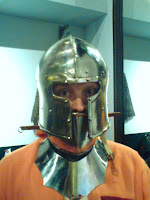 Here the green knight wears a Bellows Visored Sallet, bevor and breastplate (yes, I am under there somewhere). 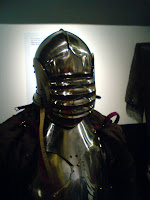 Exiting the visitor centre you enter a well stocked gift shop which carries several books of interest. I picked up a copy of Strickland. and Hardy's excellent book 'Great Warbow' for £20.

Email ThisBlogThis!Share to TwitterShare to FacebookShare to Pinterest
Labels: Battlefields

After visiting Bosworth field we happened to pass nearby to Hartshill. I'd never heard of it. However my brother had, claiming there was a castle there. After walking round for half hour without spotting anything of interest and returning to the car via Castle Road, we spotted the castle. You might mistake it for an allotment but the castle lies parallel to the road and consists of a curtain wall and the remains of a ornate chimney. 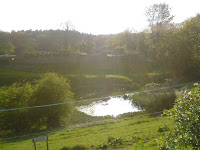 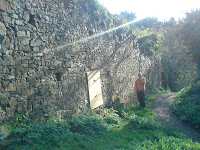 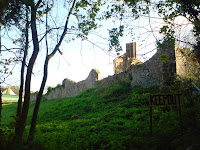 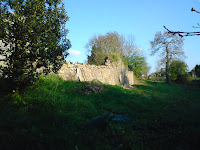 Info from Wikipedia, the free encyclopedia:

Hartshill Castle was a castle in the village of Hartshill on the outskirts of Nneaton, Warwickshire.
It was built as a motte and bailey castle in the 12th century by Hugh de Hardreshull in 1125. Robert de Hartshill was killed alongside Simon de Montford in the Battle of Evesham in 1265 and the castle fell into disuse. In 1330, it was rebuilt by John de Hardreshull.
In the 16th century, Michael and Edmund Parker founded a fortified, castellated, four-gabled timber-framed manor house in the north east angle of the bailey. The greater part of the house has collapsed.
The earthworks of the castle and remains of the house are still present. The site is privately owned.
Date of visit: 19th April 2009
Posted by Ubique Matt at Sunday, April 19, 2009 No comments:

Email ThisBlogThis!Share to TwitterShare to FacebookShare to Pinterest
Labels: Castles

Further to the previous post a quick update of the Command stands now complete with flags. 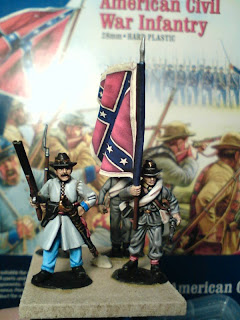 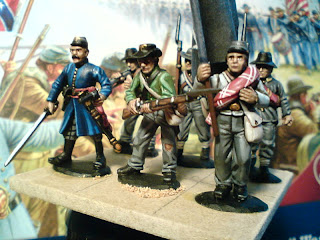 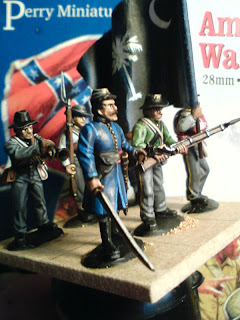 Flag from Flags For the Lads

After what seems like an eternity I'm now finished painting the Confederate figures - hurrah! There are only 54 of the little chaps but they are all unique due to the combination of different parts and paint schemes. Variety may be the spice of life but in the future I think I'll stick to nice and regimented (literally) uniforms. 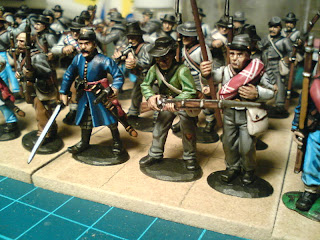 Here is a image of the command group based on the Hampton’s Legion, Washington Light Infantry Volunteers. More information on that will be posted at a later date. The only thing now left to do is to the paint and base the figures properly.

Next in line are two artillery pieces and both Union and Confederate cavalry, again all from the Perry ACW range. I've never attempted to paint miniature horses so that should be fun - I hope.

After my car decided to self destruct and blow up on April Fool's day I had an afternoon free. My brother suggested going to Coventry as the Herbert museum and art gallery has just now been refurbished and reopened. So off we went.
Of immediate interest for me was this sallet, called appropriately the 'Coventry Sallet'. 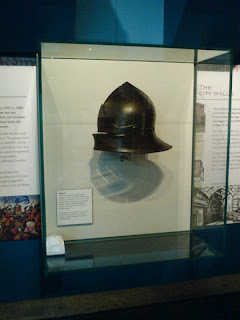 According to the info panel this was possibly made in Bruges, Belgium (nee Flanders) and is now a standard type for re-enactors.
Museum reproduction (dressing up time) 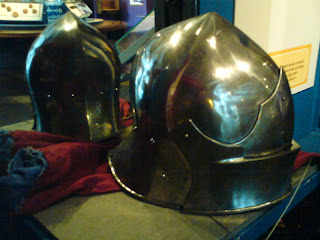 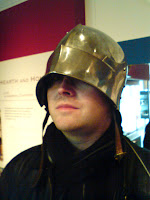 Yours truely (or "A helmet wearing a helmet"). Trying the sallet on was interesting. With the visor down, my vision is very limited. In fact, to see anything I had to either tilt the sallet back Greek hoplite style or drop my chin(s) onto my chest and look up. I can easily imagine an ordinary foot soldier without the luxury of a bevor adopting this stance. The Herbert Museum & Art gallery is well worth a visit.
Posted by Ubique Matt at Thursday, April 02, 2009 No comments: