These figures present partisans or members of resistance movements during WWII. 'The French term "partisan", derived from the Latin, was first used in the 17th century to describe the leader of a war-party' - thanks Wikipedia, I never knew that.

Please note that these are the contents of two packs of figures. ﻿﻿ 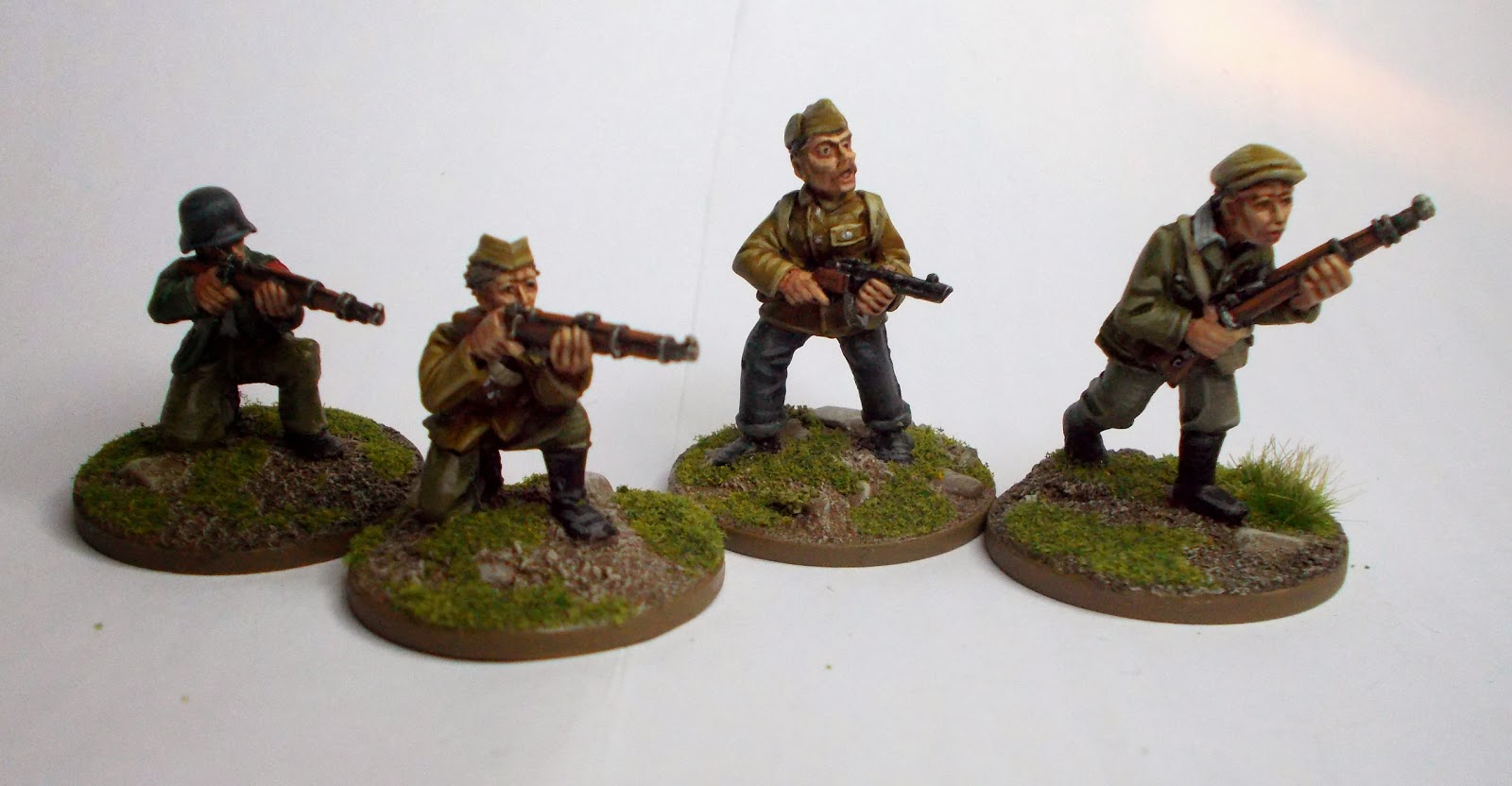 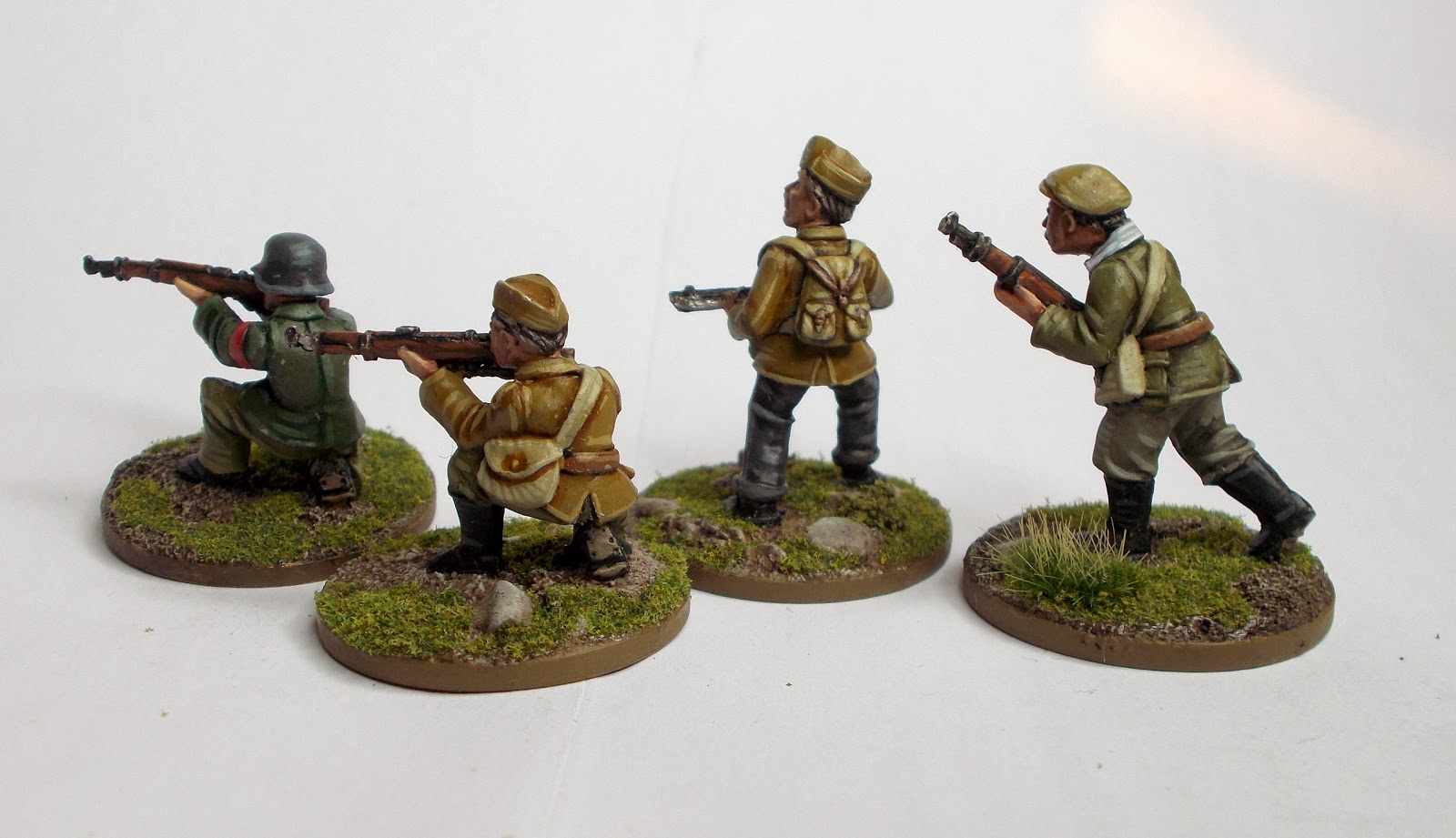 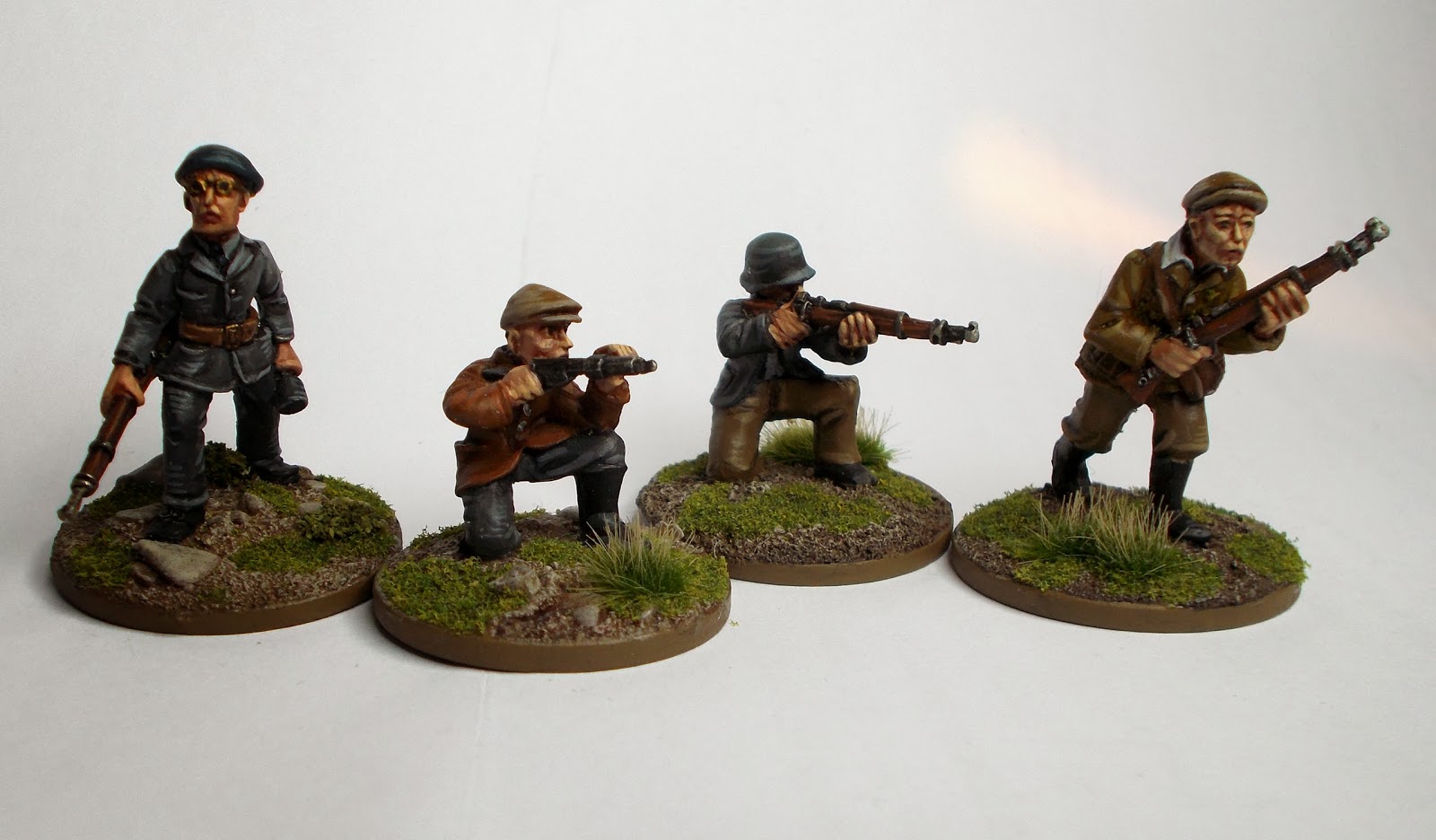 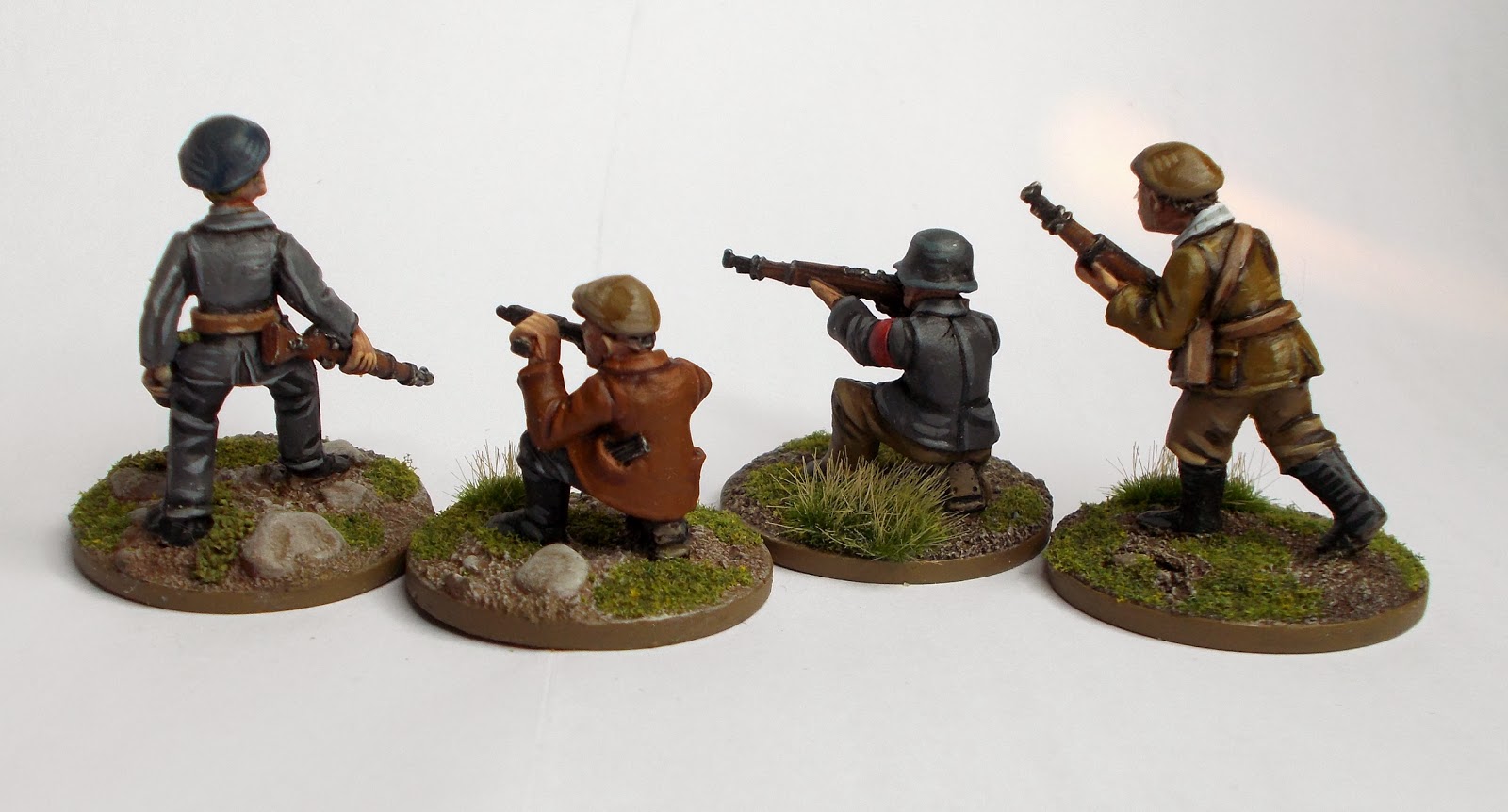 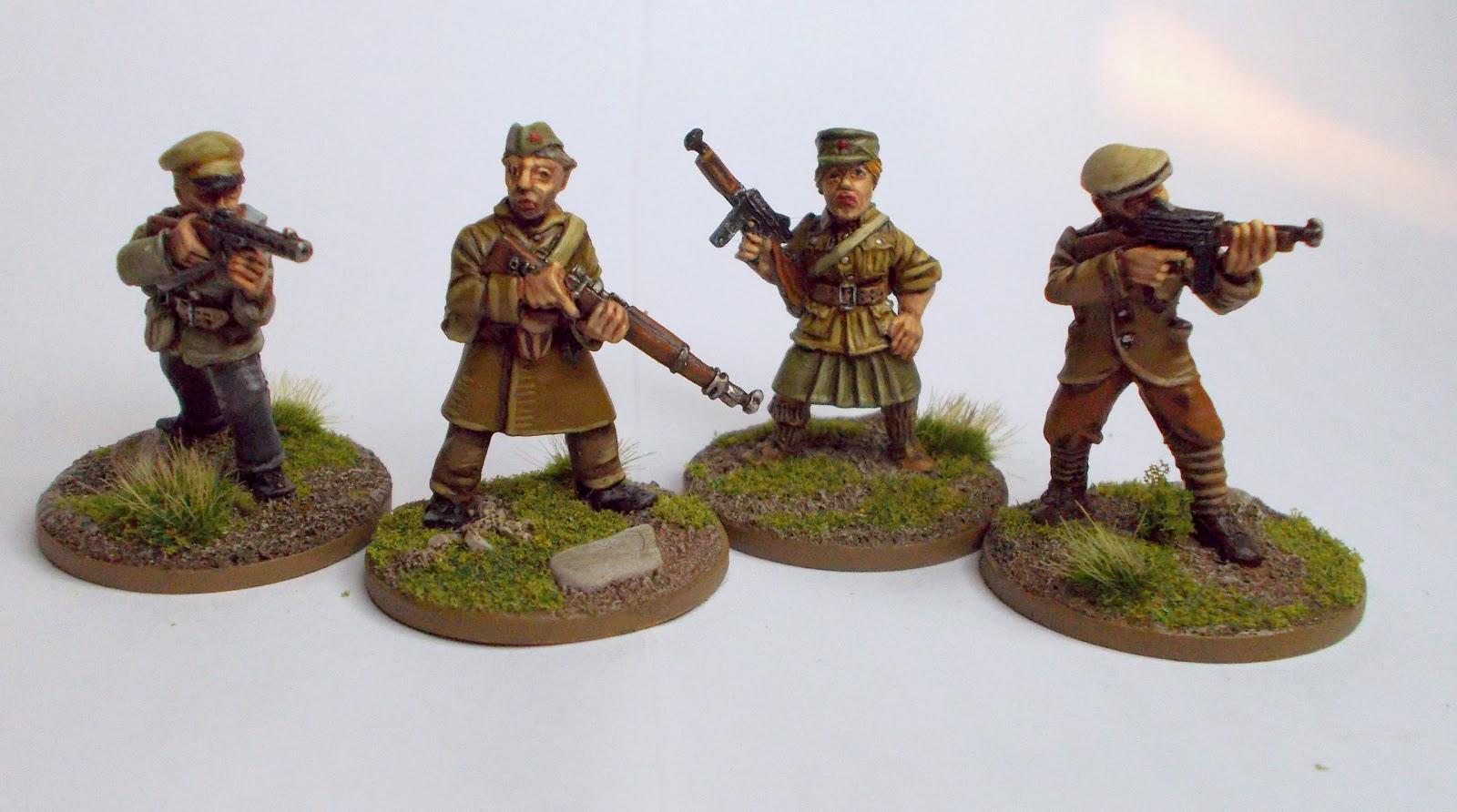 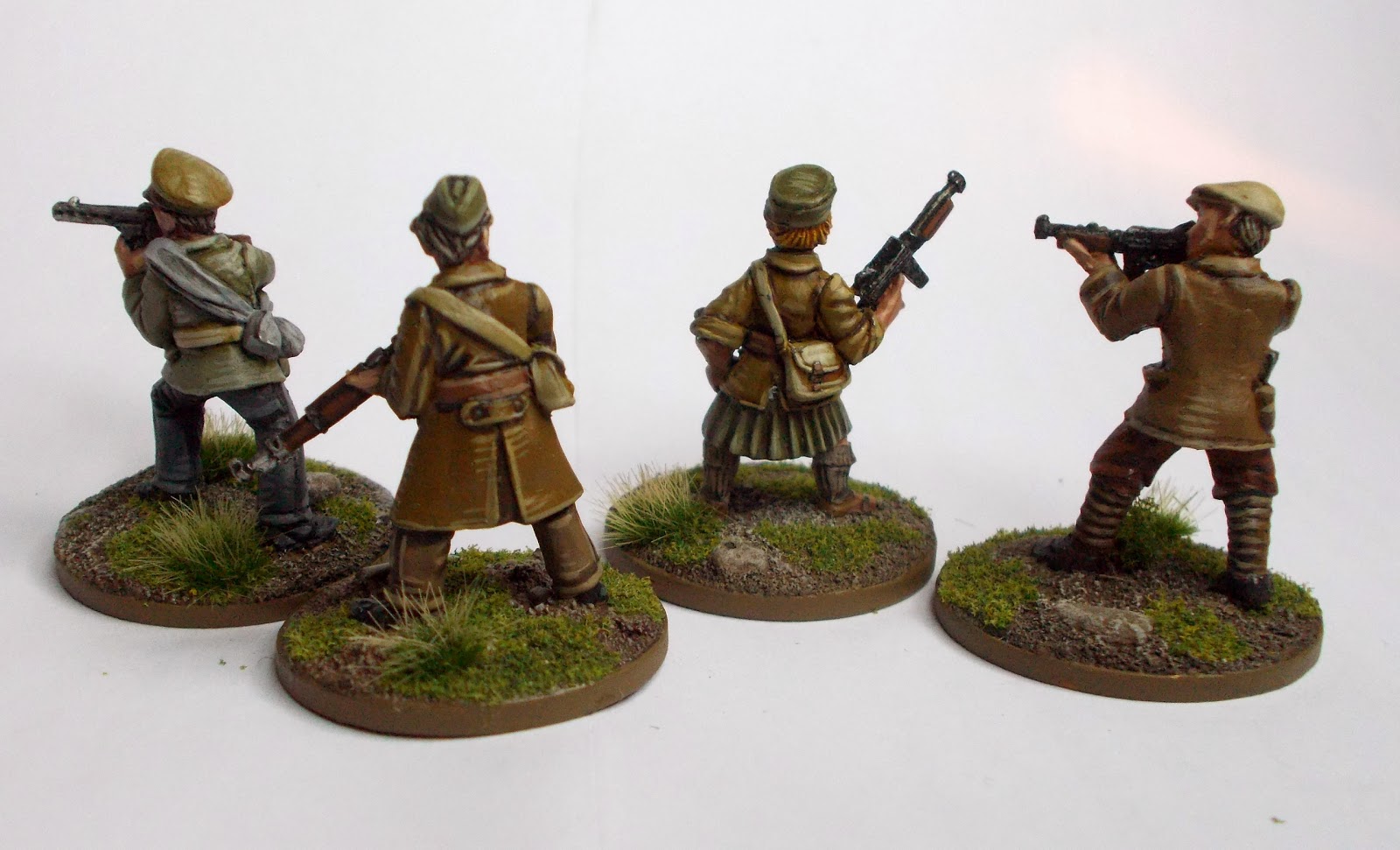 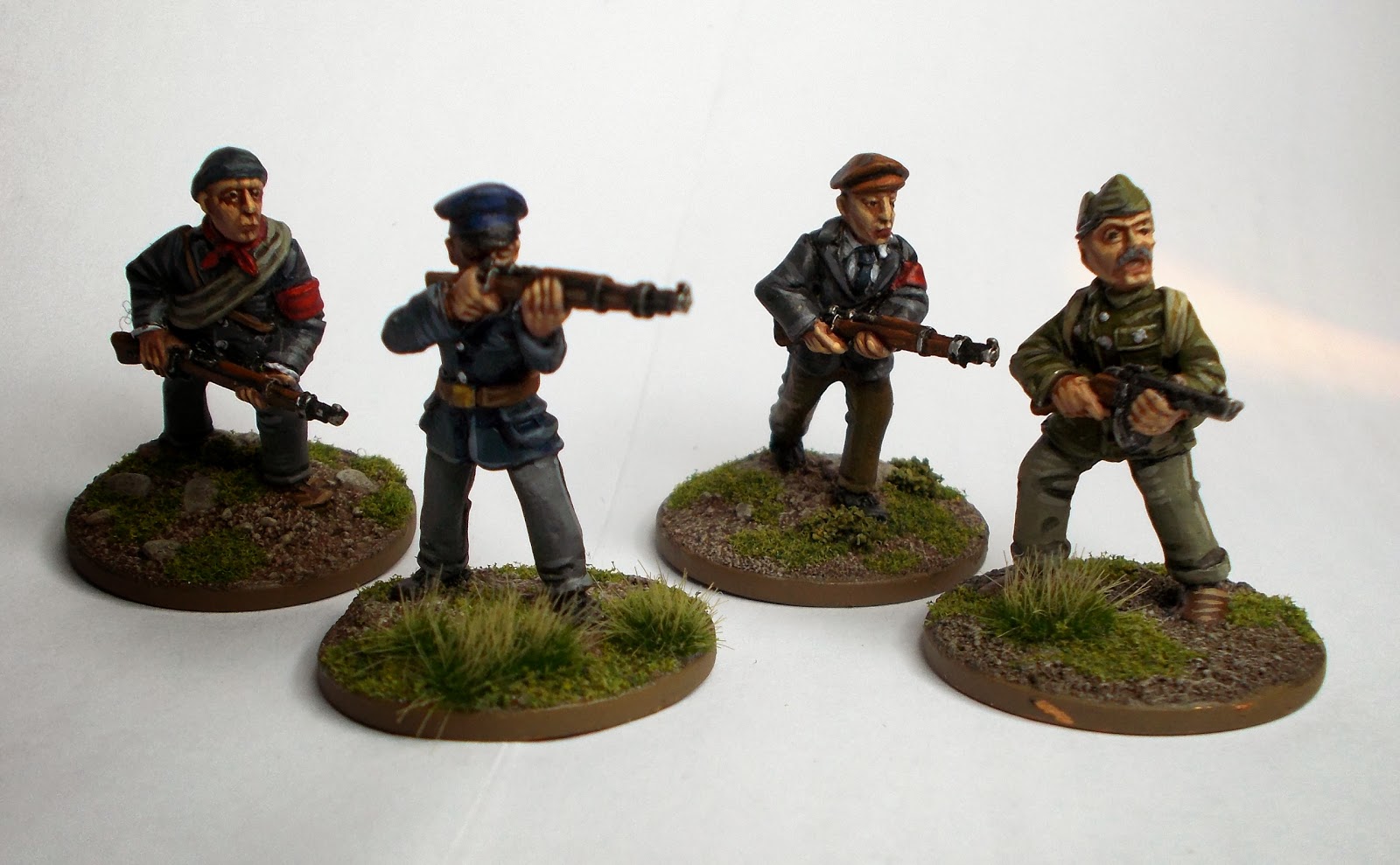 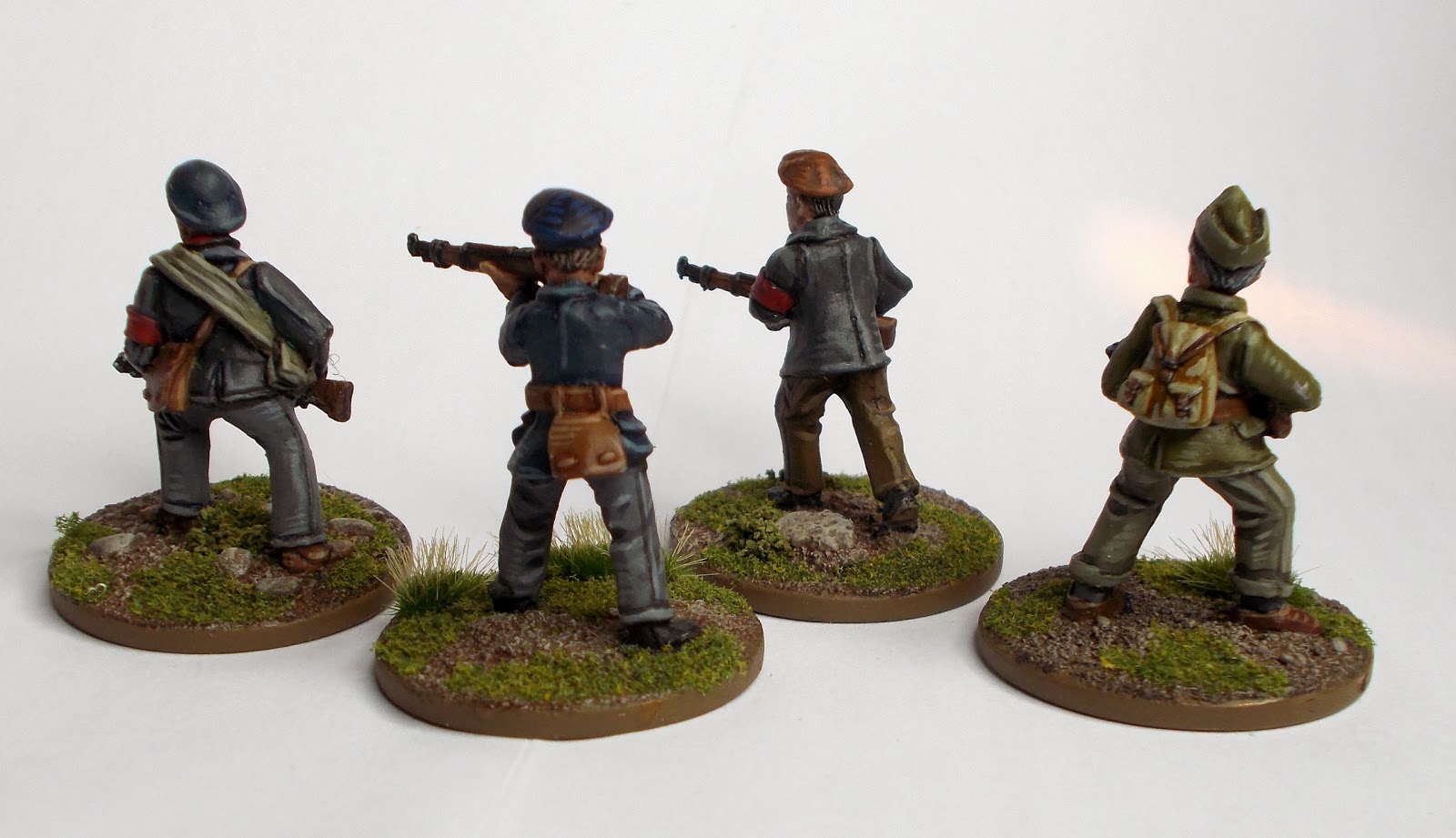 Group 4 Rear
The packs are supplied with a mixed set of eight from a certain random number of figures. With the two pacts I've purchased thirteen out of the total sixteen are unique sculpts. The figures come with a mixture of civilian, military clothing and equipment (mainly Soviet but with a Thompson sub-machine gun and a German stahlhelm helmet thrown in for good measure). Suitable for resistance fighters in several theatres including Russian/Soviet, French maquisards (with their berets) or possibly usable for Dutch, Jewish, Polish, Yugoslavians partisans etc.
I had been struggling to think of suitable colours to use as I could find very little info or colour reference images of casually dressed (especially eastern) Europeans from the 1930's and 40's. However it was whilst sitting in my local pub that I happened to notice the television was showing the latest episode of Foyle's War (a British detective drama television series originally set during World War II). 'Hello' I thought, 'this may be helpful' so I settled back with pint in hand and noted that all the male civilian clothing which seemed to be variations of rather sober shades of grey, blue and brown. Therefore I have deliberately painted these figures with a relatively subdued colour scheme, which makes sense seeing as they are supposed to represent sneaky partisans ready to ambush any passing bad guys.
Whenever possible in the future I'm going to do all my research down the pub. It certainly won't improve the quality or quantity of my painting output but I'll be too pickled to care.
Regular readers (hi mom) may have been somewhat surprised to know that I've actually prepared, modified, primed and block painted dozens of Soviet soldiers for my on going Bolt Action project but I do have various excuses for the distinct lack of finished miniatures:
With the death of Google Reader I've been missing numerous updates on the 500+ blogs I follow (Google+ is also getting on my nerves but that might be because I'm getting old and grumpy). It was whilst pondering this I remembered that I hadn't posted for a quite a time myself. In fact I realised that I had nearly missed two consecutive months, which would have been for the first ever since starting this blog. After checking it also dawned on me that this blog been going for five years (five years exact last Sunday to be precise) - doesn't time fly when you're having fun. So without making any promises I'm going to try and post on a more regular basis i.e. more than once every eight/nine weeks!
And, as always, thanks for reading.
Posted by Ubique Matt at Thursday, November 28, 2013 12 comments: