After experiencing a creative block painting previous figures I decided to switch to something slightly different. As I have family connections to the Royal Artillery and Royal Engineers (hence the blog title) I'm always drawn to field pieces and other heavy equipment. Following a swift rummage through a few boxes I chose to paint this artillery set from Perry Miniatures.
As the other Scots I've already painted look quite dour and miserable I thought I’d introduce some colour with this gun and crew, therefore the red carriage ("Finally.." I hear you cry, "he's actually painted something!"). 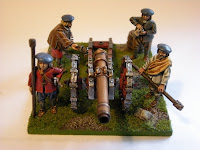 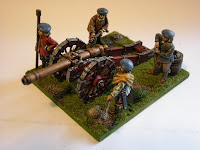 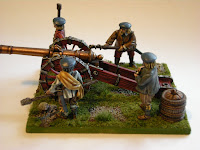 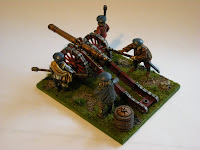 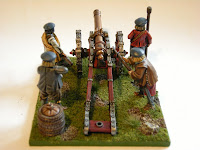 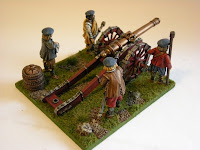 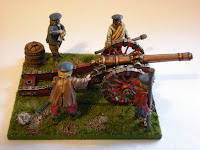 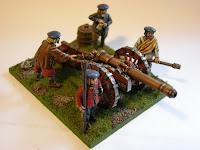 The gunner is based on the main figure shown in Plate 25 of Haythornwaite's excellent ECW book showing Royalist artillery. The matrosses have been painted to compliment the other northern forces already completed.
The barrel is from Renedra (the toolmakers used by Perry's, Warlord etc). I added greenstuff to replicate the leather lining which could be draw together; the barrel is also painted to show it banded with rope rather than iron.
I purchased this artillery piece from a show last year. The box label said it is a Falcon (9 pounder gun) plus crew - (SW19) from Scots of the Civil War 1639 - 1652 range. However looking through my large ECW lead pile I noticed that the gun and carriage are exactly the same as another Perry box I'd bought previously, Culverin (12 pounder gun) plus crew - (ECW13) English Civil War range. It's no big deal really, just thought I'd mention it.
I'm not certain the bronze colour looks right (i.e. like bronze), it's painted with GW Dwarf Bronze shaded with GW Flesh and Mud washes; comments and thoughts are welcome.
Next up should be the command group stands for the Renegade Covenanters but as usual progress is slow - four down, four to go. 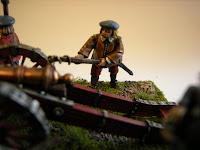 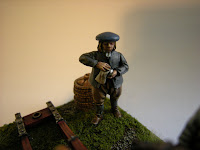 Following on from the previous post regarding Powick Bridge, the defeat at Worcester in 1651 saw Charles begin his long journey into exile and eventual safety. One of the better known episodes on this voyage was the night Charles spent hiding up an oak tree.


This event took place at Boscobel (meaning 'beautiful wood') which lies in the Shropshire/Staffordshire border (literally, the house itself is in Shropshire and grounds are in the county of Staffordshire). 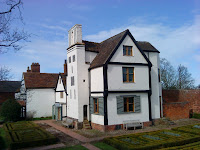 Without signs Boscobel would be difficult to find today so during the 17th century you would have thought that Charles would be relatively safe. Even so Parliament forces still came within a whisker of capturing the future King. Charles sought refuse with the numerous Catholic families in the area; however these were naturally the first target for the pursing soldiers. The families faced the very real risk of death by simply helping Charles and in fact the descendents of his helpers, the Pendrell family, still receive a small pension from the State as a reward for their loyalty - such was the risk. Although the house and surrounding vicinity have changed over the years, it is still easy to picture the events that took place here in 1651.

The attic -the priest hole where Charles hid is directly under the window. 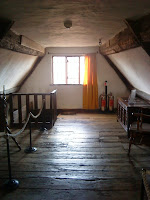 The property is now looked after by English Heritage and the guides (one of whom is a spitting image of John Cleese) give detailed and very informative tours pointing out features normally overlooked if you wondered around alone, including several priest holes. One of these hiding positions is located in the attic were it is known that Charles actually stayed.

Son and Grandson of the Royal Oak 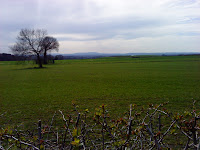 Close up view of the older, badly damaged, oak. 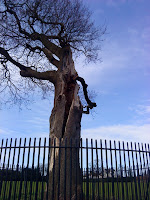 The famous oak stood in a nearby a field. Reportedly Parliament troops passed right underneath the tree during the night but the fugitives remained hidden from view. The tree seen today is the offspring of the original as that was killed off by storm damage and souvenir hunters. Another oak now stands, more or less isolated, in the same area although in the 17th C it would have been part of a large forest. Yet another tree nearby is an offshoot taken from the second oak (therefore the grandson of the original?) and was actually planted by the current Prince Charles.

Interestingly, even today this event is still remembered in a particular British way. If you’ve ever drank in any pub named the Royal Oak this harks directly back to Charles’s adventure at Boscobel.

Eight ships called the Royal Oak have served in the Royal Navy, including one that was sunk by a German submarine at Scapa Flow during the Great War.

If you want, it is possibly to do a mini re-enactment of the journey of Charles II through the midlands, as there are several other sites associated with the escape. One,White Ladies Priory, is down the road from Boscobel but very little of this remains and is only worth seeing if you are a die-hard fan of the story. Another house used of Charles is nearby. Moseley Old Hall is an Elizabethan property owned by the National Trust just a few miles to the south east. Charles later recalled that he watched his Scottish soldiers retreating back along the ‘main’ road towards the north from the defeat at Worcester from an upper window. It’s still very evocative site looking down towards the narrow country lane.
If you fancy something a little more modern then RAF Museum Cosford is also nearby. It is worth visiting to see the excellent Cold War display.
Posted by Ubique Matt at Thursday, May 13, 2010 2 comments:

In one of those strange quirks of history Powick Bridge, located just south of Worcester city centre, saw the first and last real military actions of the English Civil War. A similar event took place in the small Belgium village of Casteau where the 4th Dragoon Guards fired the first and last shots of the Great War for the British Army.
The first engagement, the battle of Powick Bridge in September 1642, was more of a cavalry skirmish. Prince Rupert troops chanced until the Parliament camp in the fields around this part of the river Teme and successfully drove off their cavalry. This enhanced the reputation of the Royalist cavalry of being nearly invincible which they enjoyed until the Cromwell’s Ironsides eventually turned up.
Almost exactly nine years later, in 1651, at the Battle of Worcester the bridge was heavy defended by Highland Scottish troops. These were later outflanked when Parliament forces used fords and a pontoon bridge to gain access to the north of the river.
It was during this later period that the two arches closest the further bank (in the image below) were destroyed. At the time of the battle the river could still be crossed using planks linking up over the remains of the abutments. The arches were later rebuilt but in the different style and are now obvious to spot.
Powick Bridge looking north towards Worcester. The large brick building in the background is a former mill that later became the world’s first combined steam/hydro electric power station during the Victorian period. 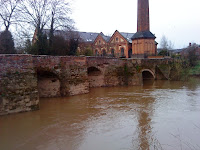 View on the bridge looking north showing the just how narrow the structure is. 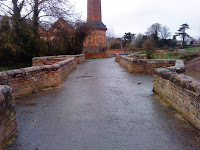 Same spot as above looking back towards Powick village and the 'road' to Great Malvern to the south. This gives a good impression of the type of hedgerows that were so hard fought over during the later battle of Worcester. 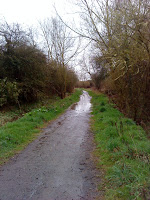 As the radical preacher Hugh Peters poignantly said, "When your wives and children shall ask where you have been, and what news, say you have been at Worcester, where England's sorrows began, and where they happily ended."
It is definitely worth the slight detour out of Worcester (previous visit detailed here) to visit Powick, the location of one of the true turning points in British (and it could be argued, world) history.
Posted by Ubique Matt at Wednesday, May 12, 2010 2 comments:

Quick update on my usual slow progress of my regiment of Renegade Covenanters. These are all of the infantry including these now completed pikemen figures. April has been taken up mainly by socialising and sightseeing, including visiting numerous sites linked to the English Civil War, of which I hope to post up images as soon as.

I'm quite pleased with the subdued colours and a few of the understated tartans which I believe is more in keeping with the Covenanter background. I've also added Woodlan Scenics' Flowering follage Purple (F177) on a number of bases to hopefully give the impression of heather.
For some reason I seem to have developed painters block regarding the two command groups that came with this box sets. So I've now started on a Perry ECW artillery piece until I can get my head round the other figures, as at the moment they don't 'look' right.

Apologies for the dodgy photographs, still coming to grips with the digital camera (especially the flash!). 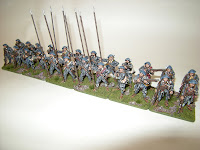 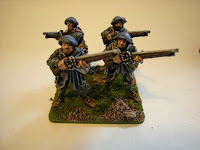 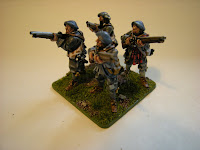 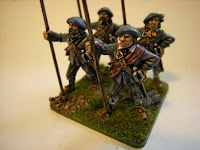 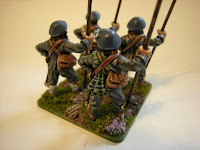 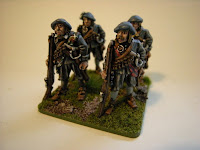 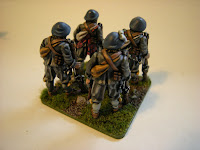