This particular artillery piece fired the British Army’s first shell of the First World War on 22 August 1914 near Binche in Belgium during the retreat from Mons. On 15th September the gun received a direct hit which killed crew member Bombardier W. King and injured four others during the advance from the Marne to the Aisne. Note the metal plate repair used to cover the hole caused by the German shell. This gun remained in use throughout the war.

Designed as a manoeuvrable and lightweight to support cavalry the 13 pounder had a range of nearly 5 miles (8 km) but it wasn’t really suited to trench warfare on the Western Front. 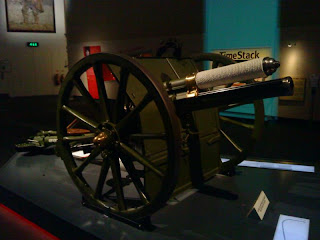 The Royal Horse Artillery still use 13 pounders to fire the salute on ceremonial and royal occasions.

This futuristic looking vehicle is actually now quite old. This particular example was used by a police patrol unit in Salisbury, South Rhodesia (now called Harare in Zimbabwe) during the Civil War leading up to independence in 1980.

The vehicle was designed to protect the inhabitants from landmines and small arms fire. Note the ‘V’ shaped hull designed to deflect explosions from mines (a feature only recently adopted in vehicles used by the British army in Afghanistan). The wheels would also have been blown off rather than absorb the blast.
Spec:
Volkswagen 4 cylinder 1584cc petrol engine and suspension.
Weighs 1980 kg (2.2 tons) and could carry 5 passengers and a driver.
Posted by Ubique Matt at Wednesday, December 15, 2010 1 comment:

Email ThisBlogThis!Share to TwitterShare to FacebookShare to Pinterest
Labels: Museums

Design by Daniel Libeskind and opened in 2002 this impressive looking museum is based on three elements, earth, air and water and mainly deals with Britain’s involvement in armed conflicts over the previous one hundred years. The seemingly random modern design is deliberately calculated to challenge your perceptions and although not immediately noticeable there are a number of subtle design features. It just is not the height of the viewing platform on the Air Shard that might make you feel uneasy. All the lines are slightly off the true vertical which, without being too obvious, leaves you feeling slightly disoriented. A similar theme continues inside the main exhibition hall where the floor reflects the curvature of the earth and slopes down at a considerable angle from the entrance to the cold war exhibits.
This was our second visit to the IWM North in Manchester and, quite rightly, I realise that few museums would dare to display rooms full of dusty cabinets crammed full of items (the Pitt Rivers Museum in Oxford being a fantastic exception). I clearly remember as a child getting ‘culture fatigue’ as my eyes would glaze over staring at Roman collections of fibulas and Samian pottery. However the IWM North seems to have gone too far in the opposite direction and tried to create ‘an experience’. You are initially greeted by a suspended Harrier Jump Jet but then by an awful lot of space in the main exhibition hall. For instance the museum catalogue lists the following seven items as the Large Objects on display in the main exhibition hall:

Considering the floor space available these items don’t take up much room. The rotating displays seem more than a gimmick considering the amount of blank wall space there is.

I realise that I must sound like a proper grumpy old scrote but hopefully this somewhat negative review won’t put off anyone from visiting. A special exhibition about naval warfare seemed curiously lacking in any visitors although it wasn’t immediately obvious where the display hall was located but was definitely worth visiting. There were a few interactive displays to keep the kids happy but also plenty of information to study if you wanted to take your time.

Being a national museum entrance is free and there is also an excellent restaurant located in the Water Shard, the pork belly draft in particular was delicious.

The lighting in the museum is quite subdued hence the usual poor photos (that's my excuse and I'm sticking to it!). There are a few more equally bad images that I'll post soon.
Posted by Ubique Matt at Wednesday, December 15, 2010 No comments: