And now for something completely different!

Regular readers ("hello mom") may recall that I visited the latest Derby Show held at a new venue at Castle Donington with my brother and old mate Ade. There we played a small demo of Warlord Games new'ish WWII rule set Bolt Action. After a game in which we somehow managed to completely wipe each other out Ade and myself decided to invest some of our future time and efforts in this game system. Ade bought the rules there and then. As mentioned previously, Ade intended to go with US forces and his rather spiffing first lot of figures can be seen here.
I however opted to take on the mighty Red Army, purchasing a box of The Plastic Soldier Company's (PSC) plastic 28mm WWII 'Russian Infantry in Summer Uniform' from Wayland's Forge in . Leaving the shop I noticed Warlord Games (WG) plastic Russian set and went back and bought those as well, justifying the purchase as I wanted to recreate the 'human wave' effect in games as cheaply as possible.

The Plastic Soldier Company's set has a certain retro charm but suffers from a lack of sharpness of detail compared to the figures in the WG set. I believe the masters were designed for 1/72 (20mm) scale and then scaled up to 28mm but suffering in the process. I'll detail the box contents once I've finished at least one lot of sprues worth of figures.

The box set contains three identical sprues but the majority of figures are single mouldings, not multi pose like WG but regular readers ("hello again mom") will know I enjoy chopping and changing figures whenever possible as I like to add some variety to my red horde. Having numerous spare heads from the WG box I decided the chop and change at least one of the three figures per sprue.

In this first batch I've only changed the heads (and a single hand), I hope to modify a few other bits and pieces with other figures. All the original, unaltered, miniatures are the first figure the left hand side (except for the second photo because I forgot) but hopefully the differences should be obvious.
Posted by Ubique Matt at Thursday, December 13, 2012 4 comments:

This relatively simple terrain piece is loosely based on the dovecote located at Minster Lovell, Oxfordshire.  Minster Lovell Hall was the home of Francis Lovell, 1st Viscount Lovell, a supporter of Richard III. As a leading Yorkist Lovell was instrumental in the Lambert Simnel rebellion but after his defeat at the Battle of Stoke Field, June 1487, Lovell disappeared from history.
The structure is one of only three freestanding round medieval dovecotes that I'm aware of, the others can be found at Dunster, . These high status (guess who's being watching too many repeats of Time Team lately) buildings would have provided fresh eggs and meat throughout the winter months.

My model has been made to match the slate tiles and rendered walls of model of the great round tower. The main structure is made from a cut off piece of the inner cardboard tube from an industrial roll of PVC foil 3 1/2" (89mm) dia. The low doorway was cut out with a small saw, the door made from wooden coffee stirrers and the door way made from small rectangular section wooden pieces.

The main roof was made from a cone of scrap cardboard with the apex cut off. The circular cap on the main roof is made cutting off the inner plastic top of a Citadel paint lid to form a ring.

I did initially try to glue three uprights directly to this ring but they broke away with the lightest of contact so I had to come up with another method. Eventually I trimmed the bottom of one of those tiny shampoo bottles found in hotels, pierced it so I could push three small lengths of barbeque skewers though it which would support the conical apex and plugged the hole in the roof. As with the round tower the roof tiles were cut from scrap packaging, starting at the lower edge and working upwards, decreasing the size of the tiles as I progressed. The apex of the roof was made from a small cone of the cardboard, covered in cardboard tiles and wedged onto the vertical barbeque sticks, stuck down with liberal use of PVA woodglue.

A curious feature with the Lovell and Dunster dovecotes are the very low entrance doors, both are only around 3' (1219mm) high. The knight figure above gives quite an accurate sense of its height. I'm not sure of the reason for this, I can only assume it was to maximise the internal space(?).
The scale of the model isn't that accurate to the original building, the diameter of the tube is too small and the pitch of the roof is too steep but as it's only for my personal use I'm not overly concerned about such details (my model, my rules afterall). I think it makes an interesting (to me, at least) alternative to the usual structures seen on a gaming table.
Posted by Ubique Matt at Wednesday, December 12, 2012 5 comments:

These model tents are based on an idea which I blatantly stole was inspired to try in order to make my own versions after reading a post on Pauls Bods excellent blog. The original post can be found here. For my version I used cardboard rather than paper (actually the packaging from various boxes of plastic miniatures).

A quick Google ("All Hail") Image search normally protrays of medieval tents as having an alternate two colour style but I was curious if this was historically accurate. I had a rummage through a couple of my reference books and I noticed that the few contemporary illustrations of medieval tents, that I could find, had quite ornate decorations which I have tried to replicate in the two tents detailed below. 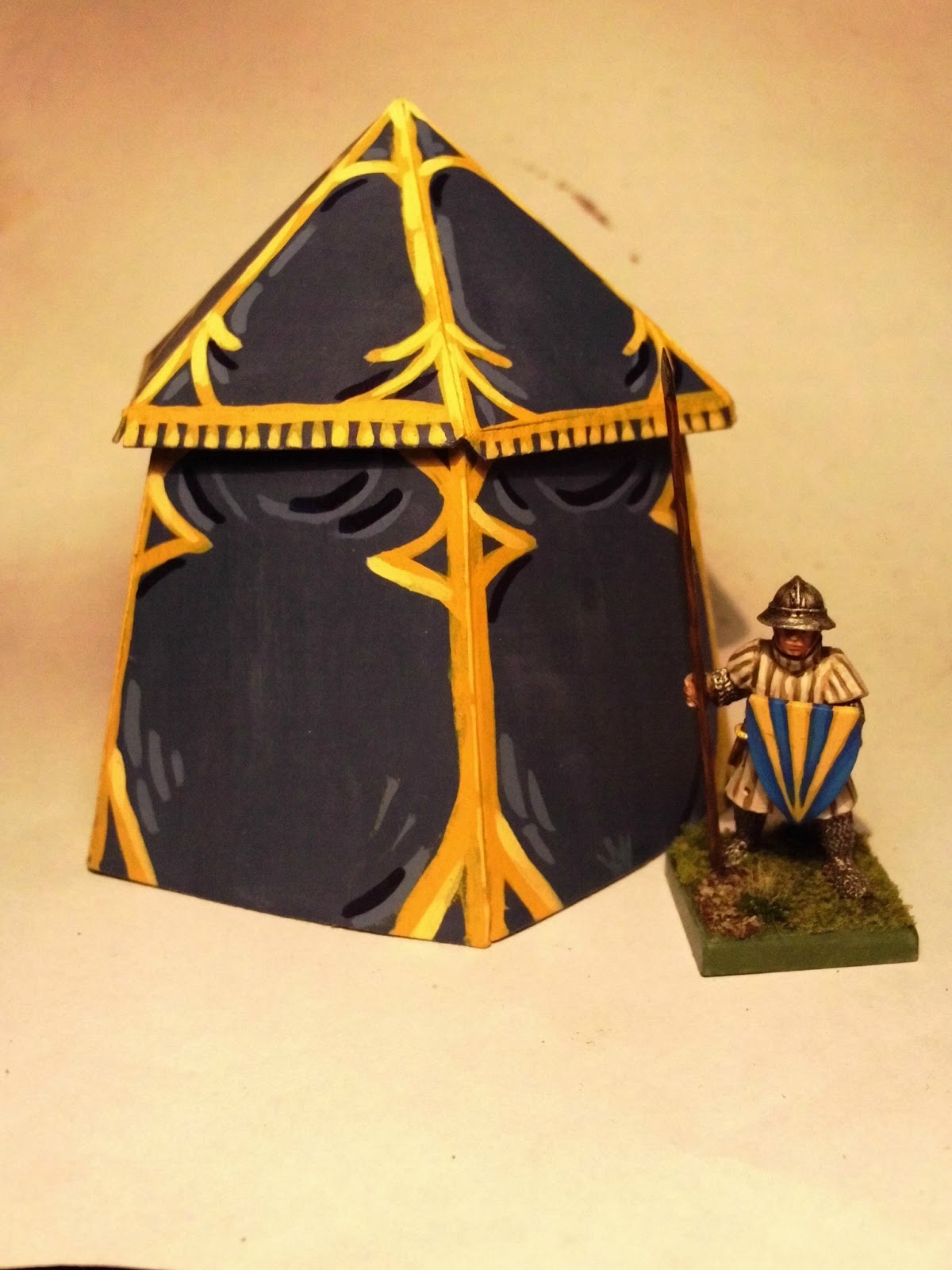 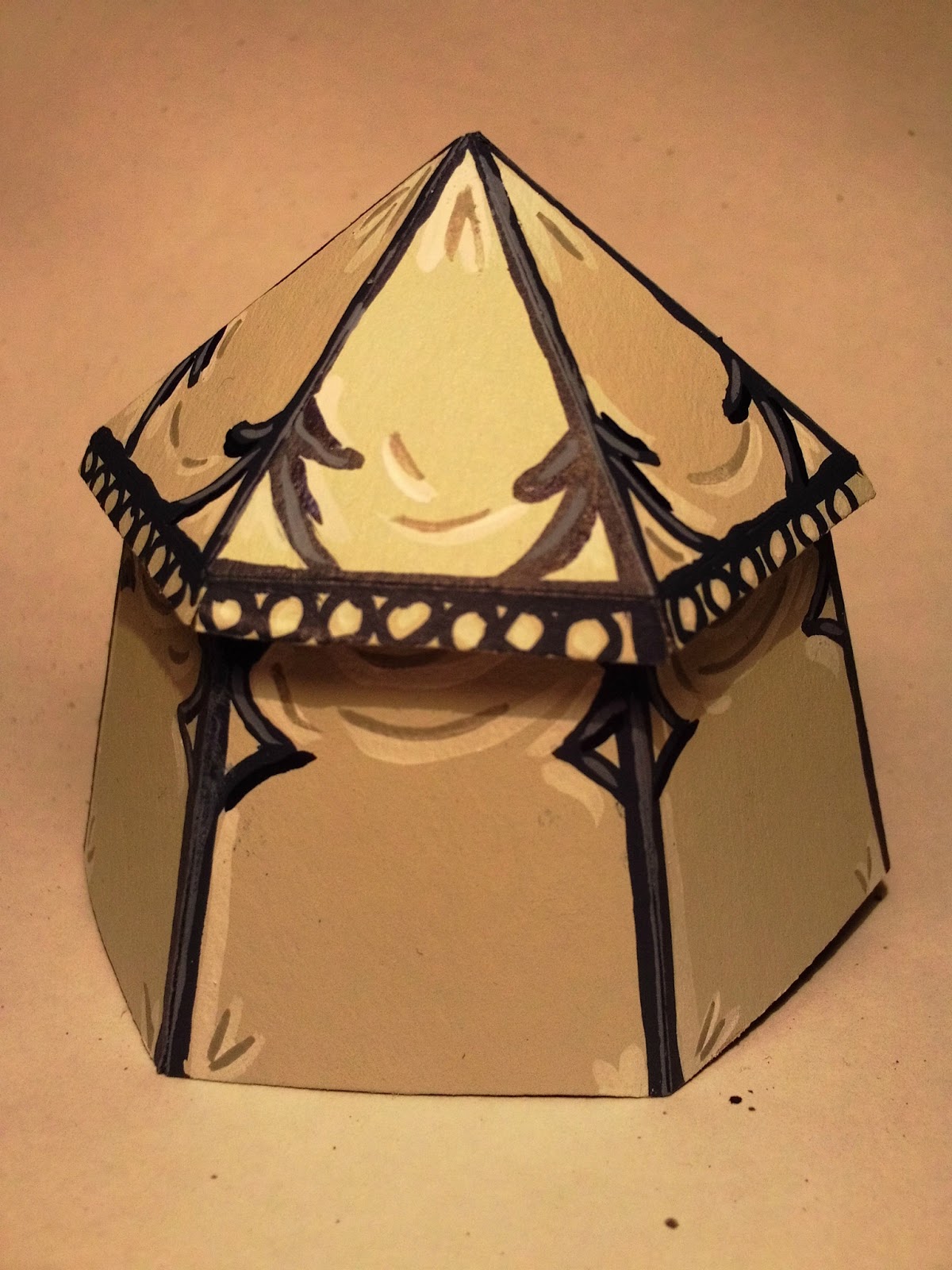 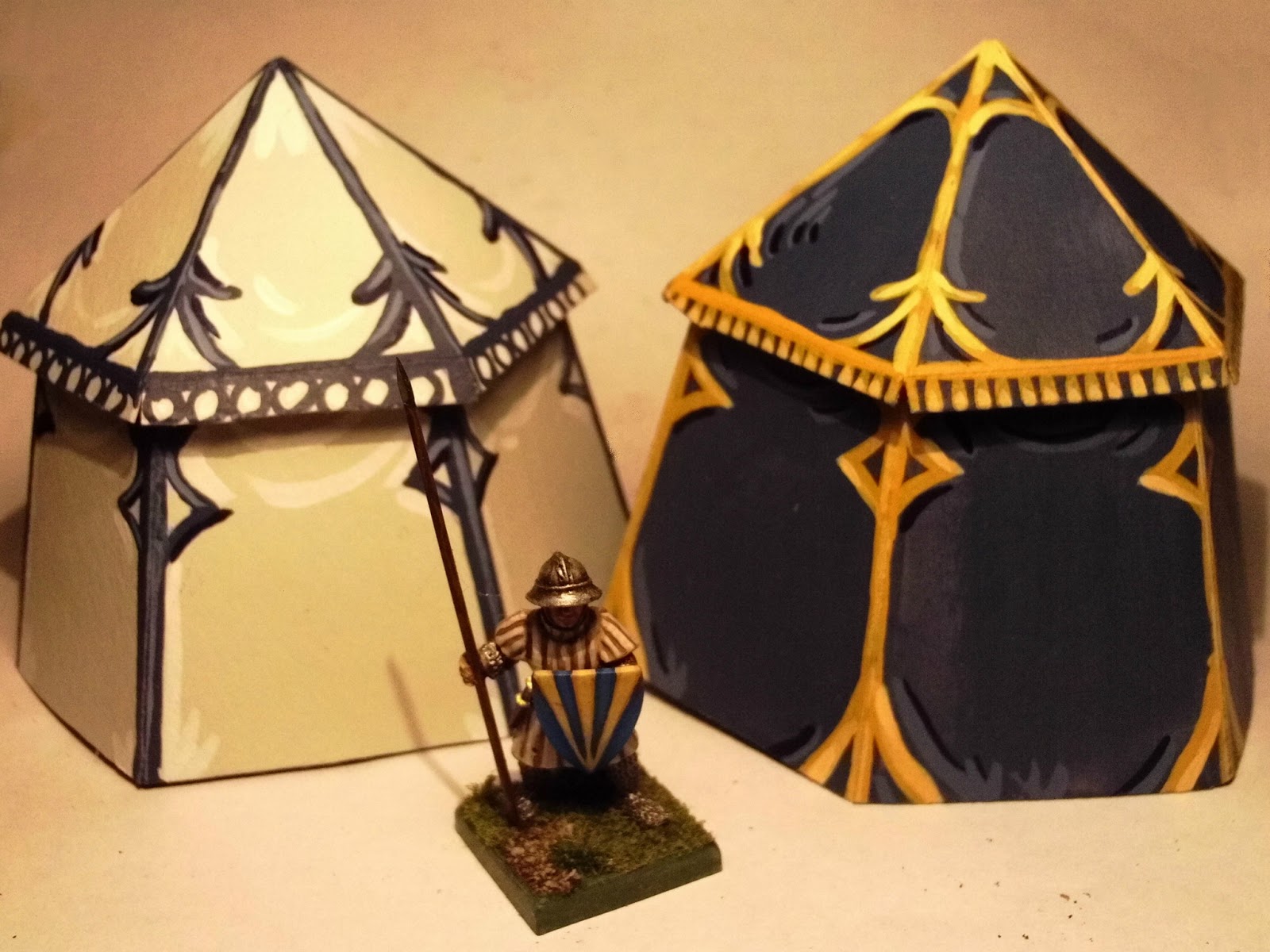 The painting is quite crude but I completed both of them in less than a hour to help past the time. Despite using the paper template I now think my initial efforts (below) were too big but were still useful practise pieces. 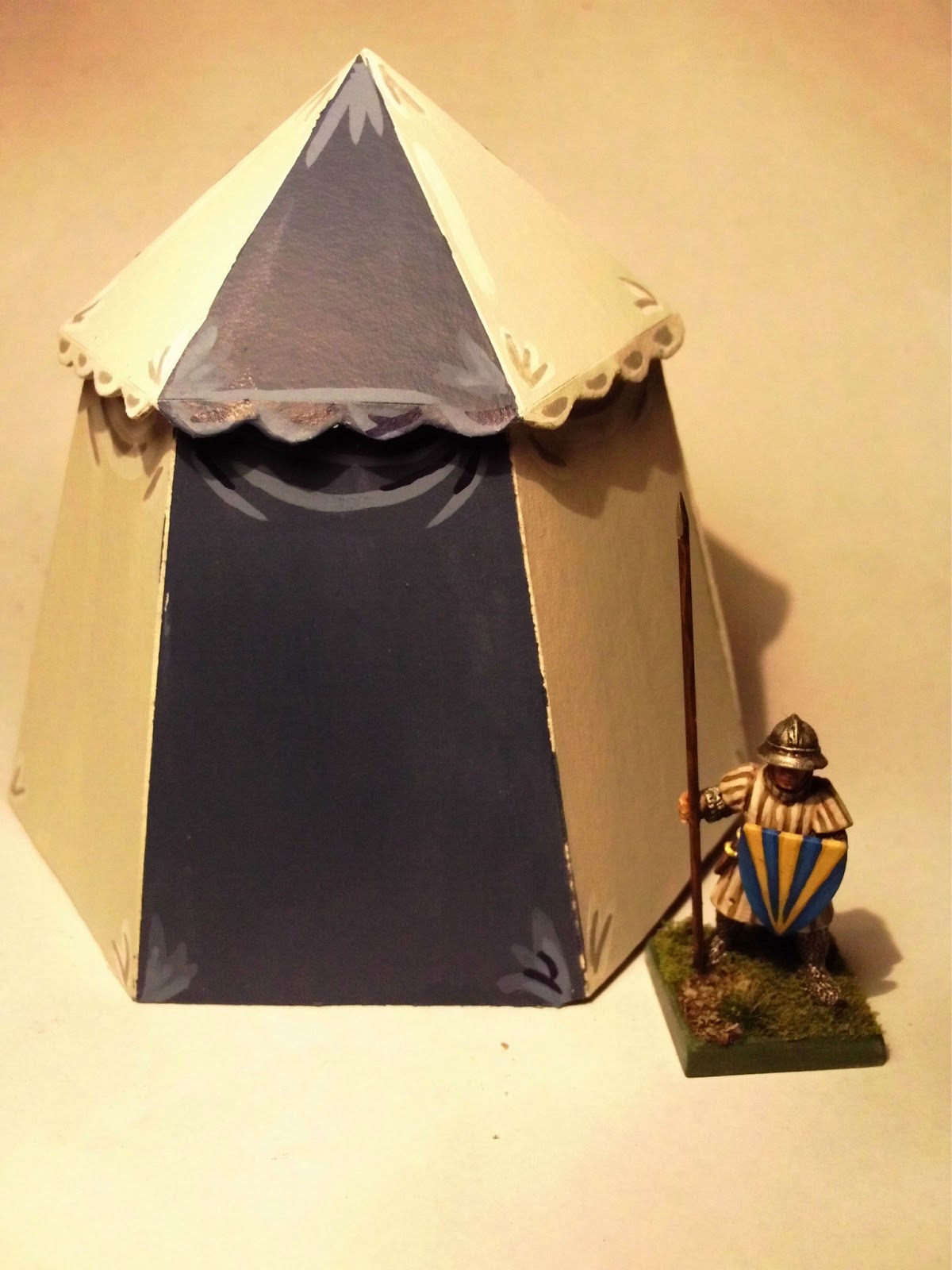 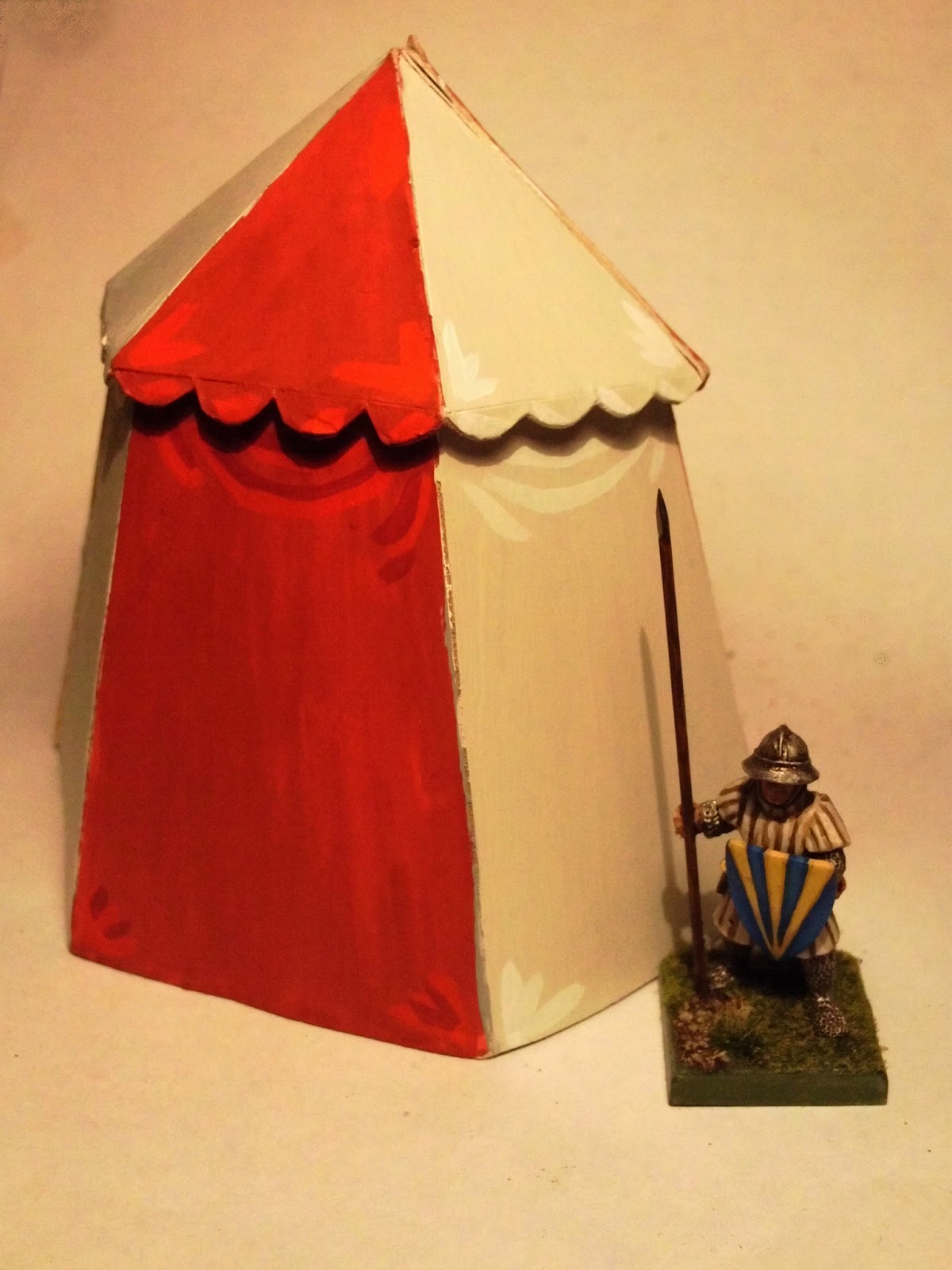 Future efforts will be tweaked slightly. I intend to double the number of sides so the tents resemble the ones I've seen in my reference books. I will also add an open flap (none the examples above have one) and attempt to give one a more accurate (and more difficult) paint job. Once I'm happy with the results I'll post a quick tutorial. I realise it's far easier and quicker to purchase and paint plastic/resin models but in this day and age the option of creating something for free out of scrap is always a nice alternative to have available.
Posted by Ubique Matt at Monday, December 10, 2012 5 comments:

A few weeks ago my brother and myself travelled into the wilds of Pembrokeshire to the south west tip of . Just one of the many sites we visited over a weekend was Carreg Coetan Arthur. This is a neolithic dolmen (burial chamber) near which dates from around 3000 BC. This dolmen is just a few miles north of the Preseli Hills which was the original source of the bluestones.

The site is actually located on a small private housing estate, within a few feet of someone's bungalow which definitely impacts on your first impression of the place. How and why the local authorities allowed housing to be built so near to this scheduled ancient monument is slightly puzzling. For one lucky householder it almost appears that they have massive, unique ornamental garden feature in their garden. It's better than a garden gnome I suppose.

The remains consist of a four metre long capstone lying horizontally across four smaller vertical stones. The capstone actually only balances on two of the uprights, something I only noticed when I was crouched underneath and which prompted me to move out the way pretty quickly, even though it has probably been like this for many hundreds, even thousands, of years.
The grave would have been originally covered with earth; smaller stones would have been used to a create a facing for the entrance of the tomb, several large stones still lie scattered nearby.
The idea for the model came about after reading this post by Mad Guru where he used large wood
chippings to create models of rocky outcrops. Thinking I could use a similar technique I kept on the lookout for appropriate material. I must have had some funny looks from people visiting the German market in Birmingham who may have wondered what I was doing, apparently staring into the empty flowers beds in the city centre when I was actually looking for suitable pieces of chipping.

However after I was unable to find any pieces that I could use for the model I decided to use blue foam instead. As the foam is very easy to cut and carve I realised I could make a more accurate model of the Carreg Coetan dolmen.

The foam uprights were stuck on to an old CD with wood glue. covering the central hole in the CD with a piece of plastic card at the same time. Once happy with the positions the CD was coated with wood glue and then covered with small stones and sharp sand. After being left to dry overnight I then fixed the capstone in place. To help secure it I cut small straight sections from a paperclip, dipped into wood glue and stuck these into the upright stones, pushing the capstone on top and once again left it to dry overnight.

The foam appeared a bit too smooth so in order to add texture I applied a thin layer of watered down ready mixed plaster, using a old stiff brush to give it a rougher, more stone like effect.

Once the plaster and glue was dry I drybrushed the stone, building up the layers of grey paint until finally finishing off with a white paint.

﻿
After applying several layers of matt varnish, and once again leaving to dry (making this model seemed to involve an awful lot of waiting), the model was finished off with grass and a couple of randomly placed tufts.
Posted by Ubique Matt at Friday, December 07, 2012 9 comments: