On Sunday a few friends and myself traveled north up the A38 enduring both the absolutely terrible weather and my equally terrible directions (“Turn right here” when I was pointing left etc.) to attend the Derby Wargames Show. This is one of the few shows I’d marked in my calendar to attend as I enjoyed it that much the previous year.

As my finances are rather limited this year I actually had a budget in mind and I think I showed remarkable restraint in sticking to it, unlike my brother or my other mates that came along. One friend spent more on a single rule book (Warhammer Ancients) than I did in total. I recommended that he should borrow a sallet from one of the medieval re-enactors to protect himself when his wife found out how much he’d spent. In fact I only purchased a few Perry miniatures, a pack of ECW cavalry, a couple of their metal WotR men at arms to mix in with their plastics and a few pots of paint. One reason for this restraint was because I still have books unread and figure packs unopened that I purchased from the same show last year.

For some reason (too busy browsing?) I completely forgot to take any pictures until we were about to leave and people were packing up but I did manage to take one shot of the main display area. The large ‘L’ shaped table in the middle held a massive game of the Battle of Waterloo with had a number of eye-catching Prussian troops on display. A friend did take plenty of pictures of the games so I’ll try and persuade him to post the images on-line. 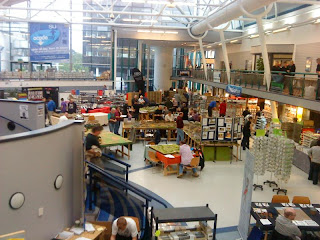 I had a chat with the chaps from Warlord Games. It was worth having a closer look at their painted figures on display. Their new plastic Prussians had been given an excellent paint job making the relatively simple figures look very striking, although it’s not a period I’m interested (at the moment).

I even managed to spot a number of the new’ish Minifigs 28mm War of 1812 figures which my brother purchased. I remember when we visited Queenstown Heights, on my brother’s insistence, many years ago on holiday which left a strong impression on me.

The venue is the main university building and has decent facilities for attendees. A clever touch from the organisers was that there was also a mini beer festival set up in the student bar with a nice selection of real ales from the Derby Brewing Company. Hurrah for decent beer.

I would recommend this show to anyone if they had the opportunity to attend as my friends and myself had a thoroughly enjoyable day out (even though we did get totally drenched).
Posted by Ubique Matt at Monday, October 04, 2010 No comments: