I’ve slowly come to realise that, at least for myself, that modelling and painting are an autumn/winter activity. It’s now late July and I’ve completed very little since I finished the Renegade Covenanters. Over the past couple of months I’ve been enjoying the rare English event of regular sunshine and have spent my spare time sightseeing around the country looking at various castles, country houses and battlefield sites.

So just to show my loyal readers (hello mom) that I’m still actually during ‘stuff’ here is a foam board building WIP.

On another trip recent to Tewkesbury, this time to visit the medieval festival, I experienced a sense of déjà vu. “I know that building” pointing out to bemused friends a timbered framed structure on the main road that passes through Tewskesbury. I recognised it because I’d seen it detailed on this blogspot. There are better and more numerous images on his site. 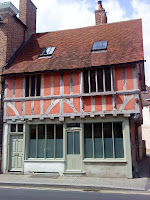 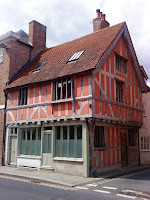 I had fancied making a model of a timber framed building and thought this would make an ideal reference source. At a push it could be used for both the WotR and ECW periods.
The model size would be dictated be the size of the roof as I was going to use Wills moulded plastic sheets which measure 73mm x 133mm - available from all good railway model shops.
The plans and views were drawn up with a standard CAD package using the photos as guidance working from the roof downwards. The model wasn’t intended on being an exact replica (so that meant I could fudge it where necessary). I decided against creating any windows to save time and effort, indicating their position by leaving the area painted plain black. The chimney piece is based loosely on the one below – seen from the rear of the John Moore museum, Tewkesbury, which is more or less opposite the reference building. 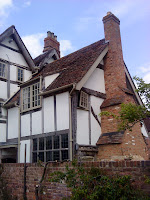 The model chimney was again made using one the brick versions of the Wills plastic sheets. 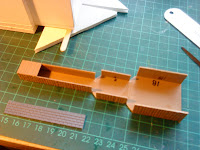 The timber frames were made from card, balsa and those stirrers from one of the well known coffee shops. It did occur to me that it may be actually cheaper to buy balsa strips (approx. 20 pence per strip) from your local model shop rather than having to buy an expensive coffee just to get your hands on some of those sticks. 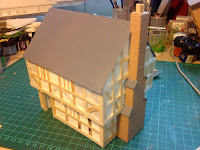 In the future I must remember to be more careful cutting and gluing the foam board. It will prevent me from having to clean up the model afterwards. In retrospect the door I made doesn’t look right, it appears more appropriate for a barn than a residential town house.

As I understand it, the traditional image of black and white timber buildings is largely an invention of the Victorians. Therefore I haven’t yet decided on the final colours although I edging towards copying the original with the grey wood and ochre red walls.

Next up figure-wise should be a number of Warlord plastic ECW cavalry.
Posted by Ubique Matt at Tuesday, July 27, 2010 3 comments: