I'm still undecided about the make up of the command stands. Warlord Games provide three figures as standard on their command frame/sprue. The numbers are evened out (literally) by an extra pikeman figure on the standard infantry frame. Detailed below are a number of alterations I've made to give some variety to the command stands.

These plastics are relatively easy to modify. The chap below, on the right, is made straight from the box. His mate on the left is a simply mod. The original arm was trimmed down leaving the hand and halberd and glued to a suitable arm. 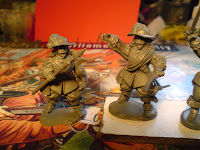 Again using the same principle, all these minis are based on a single figure. The standard one is on the far left. Mod no.1 enabled me to a have a 'real' commander with a baton although he should probably be mounted. No.2 has had his sash trimmed (I'll post another image once they're painted) and armed with a partisan instead on a flag. No.3 uses the right hand from the fifer and the spare pistol. To enable the morion helmet to fit properly I had to give the figure a severe 'haircut'. 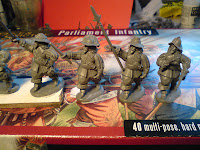 Leaving the easiest til last - one basic model, three variations; an officer, a sergeant and a pikeman. All these mini's were made simply be swopping and changing the arms and weapons supplied in the box. I am slightly concerned by the fit of the pike or more correctly the arms, to the body. Hopefully I should be able to sort this out during the final assembly. 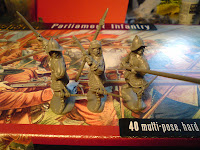 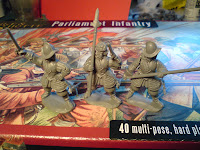 If I don't get distracted too much (I've already started making the Perry's farmhouse) I should start painting these miniatures soon. 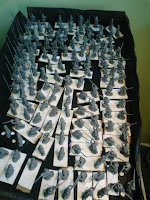 I’ve now almost completed the first stage of the preparation of the one hundred and sixty eight figures before priming and painting starts. The vast majority of cleaning the miniatures up and assembling them, attaching arms, hats, helmets etc. is now almost complete. I was planning on configuring the basing of the mini's when I happened to read a recent review of the Warlord Games ECW infantry in a wargaming magazine (don’t know why as I’d already bought them) which stated that there are actually 42, not the advertised 40, figures per box. Out of curiosity I double checked the contents of the Pike & Shotte range and the review is correct.

Each Command frame consists of three figures; two ‘officers’ and one musician, either a drummer or a fifer.

There are three infantry frames and one command frame giving a grand total of forty two. I realise forty two is an unusual number (also the Answer to the Ultimate Question of Life, the Universe, and Everything, according to Douglas Adams of course) to end up with but why any manufacturer would claim less items per box puzzles me. Especially as there are enough bits and pieces to complete all the figures and, I assume, most people will purchase more than one box. Then again I’m only a humble modeller rather than a wargame miniature manufacturer.

Next blog will hopefully include a few detailed shots of some more modified figures I've been working on, mainly junior officers and commanders.
Posted by Ubique Matt at Friday, July 24, 2009 No comments:

Whilst working on these plastic figures I couldn’t resist, as usual, at having a go at changing things, if only to add a little more variation. I think I’ve been quite reserved this time. Firstly this meant simply removing the manbag (I don’t think this is a proper period term but you know what I mean) on this figure’s left leg and carved the plastic to represent a baldric. All that was needed then was to glue a spare sword into position. I’ve repeated this process on several of the same type miniatures. 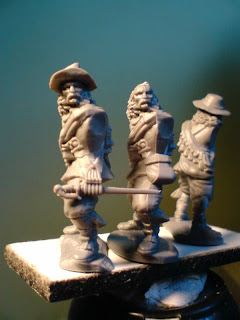 Of the total 160 figures I have to prepare and paint (which, at my current rate, will take until Christmas to complete - if I get a move on) these chaps in this picture represent approximately one third. Historically there were roughly 2:1 musketeers to pikemen although of course this wasn’t written in stone. The plastic troops shown are mainly pikemen, now ready for priming in my custom built priming tray (i.e. upturned cardboard lid from work). The pikemen’s arms, and pikes, have been left off for the moment for ease of painting.

Another small point is that if you look closely you may notice that for roughly a quarter of the advancing pikemen I've used a metal pike to replace the provided plastic ones. I'm hoping at the metal rods will provide at least some of protection for when the minis are in storage or on the field. 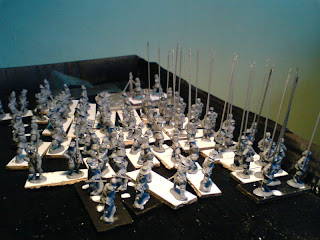 I decided to try and use the knitted Monmouth caps for the majority of the pikemen because this distinctive headwear was produced largely in nearby Bewdley. There is a very interesting (and free!) town museum based in the old Guildhall in Bewdley that has examples of the woollen caps you can try on and demos of clay pipe making; it’s more interesting than I make it sound, honestly. The town also has a strong connection with the War of the Roses though Edward IV. Of the four features on the town coat-of-arms three relate directly to Edward IV and the 1472 Battle of Tewkesbury.

Anyway, I’m now concentrated on preparing the musketeers. I’m also planning on chopping and changing the figures supplied with the small metal Scottish saker from Warlord Games although I only plan on replacing the headgear with something less 'Scottish'.
Posted by Ubique Matt at Thursday, July 09, 2009 No comments: 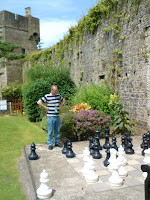 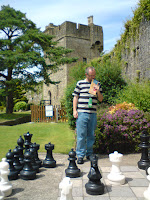 After returning from France late on Friday night my brother and myself had a relatively quiet weekend (for us anyway). On Sunday we bravely ventured into deepest, darkest Monmouthshire in southeast Wales to visit several place of interest. I'll be updating my other blog pages soon with the details but at Caldicot castle we chanced upon a large chess set.

Despite neither of us playing for years (just about remembered the correct moves) we both managed to have a pleasant game. Helps that the weather was lovely and the surroundings were inspiring. Despite the high levels of concentration and the large number of pieces taken my brother still managed to lose (as opposed to me winning – the result was a complete fluke). Checkmate, mate!