The picture below shows the only actual British aircraft to take part in the Battle of Jutland, the decisive naval battle that took place one hundred years ago today.

This aircraft, a Short S184, is located at the Fleet Air Arm Museum in Yeovil. From Wikipedia:

"A Short 184, aircraft number 8359, was the only British aircraft to take part in the Battle of Jutland. Flown by Flt Lt Frederick Rutland (who became known afterwards as "Rutland of Jutland") with Assistant Paymaster G. S. Trewin as observer, the aircraft was launched from HMS Engadine at about 3.08 p.m.: flying at about 90 feet (27 m) due to low visibility, they spotted four cruisers of the German fleet, reporting their presence back to the Engadine at about 3.30. The aircraft was presented to the Imperial War Museum in 1917, where it was damaged in a German air raid during the blitz. The unrestored forward section of the fuselage is now an exhibit in the Fleet Air Arm Museum."

The reference to "damaged in a German air raid" during WWII is interesting. The fuselage is actually peppered with bullet holes, something that was only recently noticed during conservation efforts.


More details about the pilot from the Osprey Publishing website:

"Rutland received a well-deserved DSC for his gallantry, and was thereafter known as Rutland of Jutland. He left the Royal Navy in 1922, apparently becoming a consultant. Setting up shop at Honolulu, Rutland sold his expertise on aircraft carrier operations to the Imperial Japanese Navy. British intelligence, unamused by his enterprise, interned Rutland shortly after his return to Britain in October 1941."


Armament - One free mounted Lewis machine gun aft, and provision for one 14in torpedo or various bombs up to a maximum of 520lb
Posted by Ubique Matt at Tuesday, May 31, 2016 No comments:

Mine Entrance, scratchbuilt - Part 2 of 2

Although not generally well known the use of mine warfare was fairly common throughout the medieval and 17th century English Civil War (ECW) periods. During the medieval period ,  and Bungay castles were all attacked using mines.

Throughout the ECW mines were used at the sieges of the castles at Harwardine, Sherborne, Goodrich, Wardour and Pontefract. Mines were also used against the city walls of ,  and  cathedral to name ones I'm aware of. In fact the first known use of explosive mine in  took place at the siege of  in 1643 by .

Also of interest are the mine and countermines created at the 1546–1547 siege of St. Andrew's castle in . These are particularly impressive, you can watch people walk above you through a grill in the pavement as you stand in the original mine entrance.

As with the sap in a previous post [Part 1 here] the base for this model is a CD with 20mm thick extruded Styrofoam glued onto it to build up the groundwork. 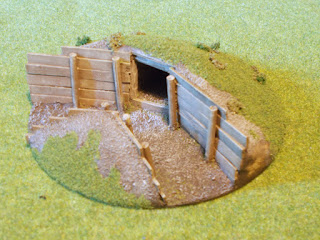 The trenches were cut out with a craft knife and lined with horizontal coffee stirrers and vertical barbeque sticks. Gaps in the foam were smoothed over using DAS white modelling clay. I've no idea if it is any different from the terracotta version apart from the colour.
For the entrance supports I used dowel whittled to give the impression that it had been rough hewn from timber. The entrance for the mine with downward facing coffee stirrers facing diagonal downwards, which looking at the images again you can't actually see in the photos.

I'm still in two minds as to whether I should add a blanket/screen to the mine entrance. I'm not sure if this was simply to keep out the rain or had another practical reason.
Posted by Ubique Matt at Thursday, May 19, 2016 No comments:

These two posts will detail models I've made to represent a sap and a mine entrance for my historical games. Until I make (if ever) a form of trench system (and work out rules for siege warfare at a skirmish level) then I will probably use these as objective markers with medieval and English Civil War (ECW) games, hence the labels.

An interesting approach to siege rules can be found at the following blog, details here: [Siege Testing] 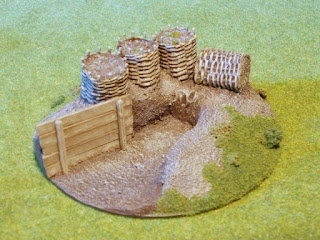 This form of siege work was often used to advance a trench so that mortars could brought into use against heavily defended fortifications, such as a castle. Once mortars were within effective range castle garrisons normally quickly surrendered as there was no real defense against such weapons, as witnessed at the siege of [Goodrich Castle]. I will detail a model mortar in a future post).

The base for both models is simply a CD with 20mm thick extruded Styrofoam (or Blue Foam as most people seem to call it) glued onto it. 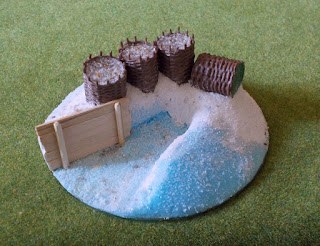 The sap was cut out with a sharp craft knife and lined with horizontal coffee stirrers and vertical barbeque sticks. Gaps in the foam were filled in with DAS white modelling clay. 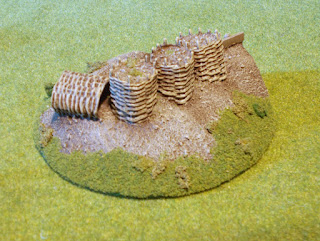 The gabions, from Renedra Ltd, were placed along the top of the sap. This is based upon an illustrations (link below) that shows the practical way to dig a siege work and remain relatively safe.

The Attack of Fortresses

To achieve the same look I added the wicker base of the horizontal lying gabion using greenstuff.
Posted by Ubique Matt at Wednesday, May 18, 2016 No comments: