'The Men Who Would Be Kings' colonial rules released

Yesterday was the official release date for the new colonial skirmish game from Osprey, 'The Men Who Would Be Kings' (TMWWBK). There have already been reviews (and even game reports) posted online.

As a means of saying thank you the author Dan Mersey very kindly arranges complimentary copies to be sent to people who have provided feedback, playtesting, photos of painted figures, army lists etc. I know this because I previoulsy received a free copy of Lion Rampant.

Therefore when an Osprey-wargame-book-shaped package turned up on Wednesday I immediately realised it must be a copy of TMWWBK. For some reason I had convinced myself that I wouldn't receive a copy. I reasoned that Osprey might not be keen to hand out so many free copies to all the playtester and contributers, plus the fact that there had been a copy of the book at my local gaming store for at least a week. I had therefore assumed the rules had been already been officially released. I think publishers and games manufacturers (such as Mantic) are now suppling 'bricks and mortar' retailers earlier in a effort to help and support them in the face of competition from online companies such as Amazon. 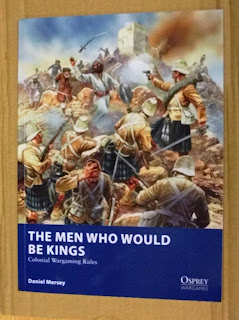 I was lucky to have a few army lists included in the rules (I actually get two mentions, one in the acknowledgments and one in the main text, which came as a nice surprise). It is surprisingly difficult conjuring up an exact 24 point field force that reflects the units you are trying to portray. If there is any interest I may post a number of alternative lists I initially came up with, either on this blog or on the Dux Rampant forum. As the author, Dan Mersey, often repeats the lists are not 'official' as such, neither are they ones that you are obliged to use. If you don't like the ones provided then simply create your own version that suits your needs or indeed your figure collection.

Another pleasant surprise came when I read through the various scenarios in the book (Scenario C?). This was because this particular scenario wasn't actually included in the playtesting draft copy I had. The scenario is based on the actions of a certain Sergeant Booth that took place during the Zulu wars. I knew of this chap because he happens to be bured in my home town of Brierley Hill in the West Midlands. Details of his story and grave can be found in a previous post [here]. His heroic actions are a perfect basis for a game of TMWWBK.

As you'd expect from an Osprey publication the book is full of illustrations from artists such as Peter Dennis, Angus McBride and Richard Scollins, all three who happen to be some of my personal favourite illustrators. I was slightly taken aback to realise that Scollins had died way back in 1992. I say this because it is probably a little known fact that Scollins was involved in the initial open air Shakespeare productions that are held annually at Stafford castle. Scollins designed the historically accurate costumes (not the leather fantasy versions that seem so popular in modern adaptions) and also used to appear as a minor character in the cast. My brother was fortunate to purchase a number of his original artworks showing his costume designs.

I digress. If you want a copy of the rules you can get it from [Osprey Publishing] direct in various formats.

If you're lucky to have a decent local gaming store (such as mine) Asgard Games Uk you should also be able to buy a copy from them.
Posted by Ubique Matt at Friday, September 23, 2016 No comments:

Email ThisBlogThis!Share to TwitterShare to FacebookShare to Pinterest
Labels: The Men Who Would Be Kings
Newer Posts Older Posts Home
Subscribe to: Posts (Atom)