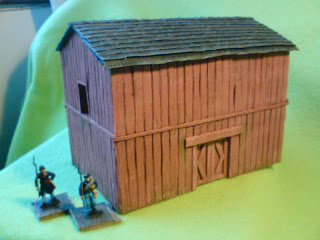 For my Big Red Barn I used the usual construction method of foam board walls but for the roof this time I tried to save time and utilised individual cardboard roof tiles, stuck down with Prit-Stick. Not based on any particular historical example but everyone needs a barn on their battlefield, don’t they?

Made to suit 28mm figures.
Posted by Ubique Matt at Tuesday, December 16, 2008 No comments: 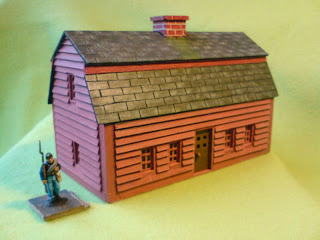 For a while I’ve been interested in making a number of buildings from the AWI period. As I’d visited Saratoga I thought it would be make sense to create some from that particular site. I made the mistake of ‘googling’ (is this a real word?) ‘Freemans Farm’ and eventually came up with an image of Freeman Farm House.

Even though I’ve visited the battle site back in the early 90’s I couldn’t remember seeing this particular building but assumed that I’d forgotten it or we’d simply missed it, as you tour the battle by car stopping off at areas of interest. The Americans even have ‘drive-thru’ battle sites.

After further research it turns out this building is actually in Sturbridge, Massachusetts and dates from 1810-1815 and was home for Pliny Freeman and his wife Delia. It would appear I was actually thinking of the John Neilson House, situated on Bemis Heights, which is similar in colour and is probably why I thought it was in Saratoga. The Neilson building is now on the list of future projects.

Anyway, from what I’ve read and seen from the period this farm building is pretty typical of New England area during the AWI and so, hopefully, won’t look too out of place on my table. If not then I can always use it for an imaginary New England battle with my ACW figures. The obvious benefit with making houses for this period is that they can be used for later eras.

Made to suit 28mm figures.
Made from foam board, balsa wood & plastic card.
Posted by Ubique Matt at Tuesday, December 16, 2008 No comments: 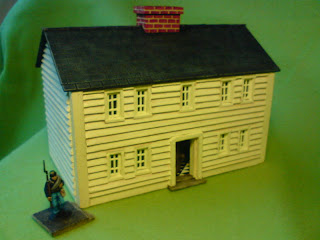 I’m planning on producing a number of buildings and structures from these areas including the Old Stone Fort, Schoharie, NY (site of a small loyalist skirmish in 1780) and a special one from Williamsburg, Virginia but don’t hold your breath.

The reason for this is because way back in 1991 my brother and myself spent a week in Boston, following the Freedom trail, literally a line of coloured bricks (red if I remember correctly) to various points of interest including:
USS Constitution
Bunker (Breeds) Hill.
the Old North Church,
Old State House.

Then in 1993 I enjoyed a driving holiday with my brother from Boston to New York via a slight detour to Niagara, including on the way:
Concord & Lexington.
Old Stone Fort, Schoharie, NY (site of a small loyalist skirmish 1780).
Saratoga.
Several War of 1812 sites including Fort George, Fort Niagara & Queenston Heights.

The Jason Russell House is in Arlington (then called Menotomy), Massachusetts and saw heavy fighting on 19th April 1775 during the retreat of Earl Percy’s troops from Concord.

The core of the house was built in 1740 and is essentially unchanged today, although further extensions were subsequently added. The enclosed porch was a later edition so I left this feature off the model. Now the house is open as a museum and still bares the scars from the conflict.

On hearing the noise I imagine brave old Russell (he was 59 at the time of his death) shouted something like “Go and bugger off round your own end” and got skewered for his troubles. Russell apparently asked for help to defend his house, saying "An Englishman's home is his castle."

Made from foam board, balsa wood & plastic card.
Posted by Ubique Matt at Tuesday, December 16, 2008 No comments:

This is my first attempt at a modelling blog; any blog come to think of it, so you’ll have to excuse any technical limitations. Normally the last thing I want to do after work was sit down at a computer again, but seeing as everyone else seems to be wired up to the internet I thought I’d give some 21st century technology a run for its money.

The idea for this blog site is to record places of historical interest I’ve visited and also to chart progress with my military modelling, including wargaming figures, terrain etc.

Oddly enough the resurgence for my interest in wargaming started around a year ago and came about via two separate events. Firstly was my disillusionment with computer games or, more likely, my regression back to childhood. This was triggered just after I bought the PC game ‘Company of Heroes’. Although the game is visually and tactically very impressive it still left me cold; now whether this is because I spend enough time at work glued to a computer I’m not sure. I literally wasted hours and hours playing computer games with nothing to show for it apart from a feeling of motion sickness. Living life vicariously though a monitor had lost its appeal.


The second factor was an advert for the JS II tank, by Tamiya, in Military Illustrated. After looking at this impressive model I was bitten by the modeling bug again. All this coincided with a local model show. Back in March I attended WMMS 2008 in Wolverhampton looking for similar large scale models and 54mm figures etc. similar to the ones I’d made in my youth. What caught I eye though were the 28mm wargaming figures, in particular the display by the Shrewsbury Wargames Society with their stunning Seven Years War game with fantastic buildings and terrain. Why not have your cake and eat it? (Shouldn’t that be “eat your cake and have it”?). Historically accurate figures that you can also play with! Everyone’s a winner.

I’m new to the hobby unless you count playing with Atlantic Romans and Greeks (anyone remember them?) back in the late 70’s when I was a young lad. According to the ever excellent Plastic Soldier Review these figures were launched in 1977 when I would have been all of six years old.

These ‘games’ generally consisted of my older brother and myself spending hours setting up the individual, unpainted, plastic figures only for my brother to knock them all down whenever he was losing. Although to be fair, I had a vast number supremacy and the extent of the rules consisted off rolling a single die and knocking over the relevant numbers. No movement restrictions or modifiers, nuffink. Ah, happy days.

My main principle interests are, in no particular order, late medieval, American War Independence (AWI) and the Great War.
Posted by Ubique Matt at Tuesday, December 16, 2008 No comments:

Email ThisBlogThis!Share to TwitterShare to FacebookShare to Pinterest
Labels: Modelling 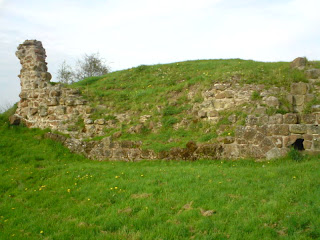 The original castle was destroyed in 1215 by the Welsh Prince Llewellyn, rebuilt by Henry III and Fitz Alan family, later renamed Castle Isabel.

After a short siege (five days) in June 1645 the garrison surrendered to Parliamentary forces. The castle was torched and the stone was robbed to repair nearby Shrewsbury walls.

You can still see the original motte and standstone walls and if you look carefully enough you can make out a number of earthwork features. You’ll need a healthy imagination to appreciate the site but it’s worth having a look round. 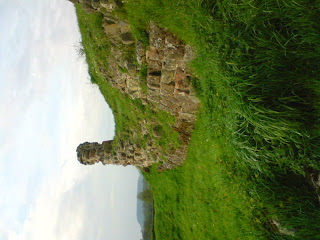 Posted by Ubique Matt at Wednesday, December 03, 2008 No comments: