"Does exactly what is says on the tin."

Just a few images of the miniatures I'm currently working on. These are from Renegade Miniatures - ECW Infantry Standing/Ready Regiment Covenanters 01 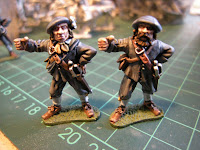 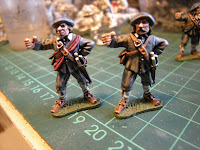 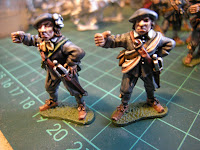 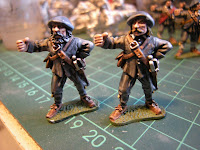 These models are inspired after a visit to Fort Royal, Worcester and are based on a illustration of Queens Sconce in Newark in Osprey’s ‘English Civil War Fortifications 1642-51 (Volume 9 of Fortress range).  The items were completed in October last year but I'd forgotten all about them.  After a tidy up they were unearthed and painted. 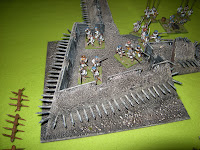 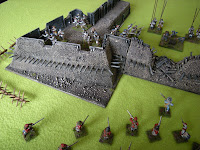 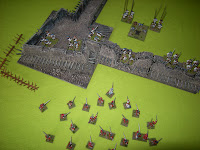 View from inside the fort. 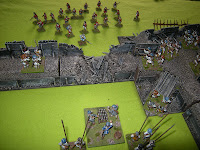 Previous posts relating to the construction of the models and the history of the real thing can be found here Part 1, Part 2, Part 3 & Part 4.
Posted by Ubique Matt at Friday, March 12, 2010 4 comments:

The latest copy of the Wargames Illustrated  - Issue 269 March 2010 'the ECW edition' (purchased by my brother - thanks) is probably the best yet since the BattleFront takeover. There are several very interesting articles but the one that caught my eye in particular was an excellent one about the Battle of Birmingham, if only because I work and often shop there.

The event is normally referred to as The Battle of Camp Hill which took place in April 1643. More details here. The battle is notable because William Feilding, 1st Earl of Denbigh, (present at the battle of Edgehill, October 1642) was injured and died shortly afterwards. The action also inspired the famous pamphlet illustration of Prince Rupert but I hope to post on that subject later on.

The article states that battle site lies under the urban sprawl of modern Birmingham and there is nothing left to see. However I don't believe this is strictly true if only because of this building; the Old Crown pub. Located in Deritend, it lies half way between St. Martins and Camp Hill, in the most likely place where the running battle took place.

The Grade II listed pub is the oldest secular building still standing in Birmingham. Although the pub claims to date from 1368 the present building dates from the 15th century. It is just about half a mile away from the new Bullring. If you need directions, ask a local to point you towards the Custard Factory (as in Bird's custard). This building is right next to the Old Crown.

If you fancy re-acting a favourite pass time of plenty of English Civil War soldiers i.e. drinking beer, then I’d recommend you cross over the dual carriageway and pop into either the Swan or the Anchor pubs, which is just behind the brand new bus terminal. As bus depots go, this one is on quite attractive (yes, I do need to get out more). Both of these very traditional pubs are on the same road parallel to the High Street. I visited both pubs last week (only in the name of research for this blog, you understand).

These images are taken from wikipedia as my new phone camera went into a major sulk and failed to save any of my pictures.

The Victorian church St. Martin's in the Bullring was rebuilt over the remains of the medieval building. This well known landmark still however contains several effigies of local knights all located in the north aisle. The best remaining effigy is that of John Be Bermingham (sic) who fought for twenty years in France before dying in 1393. The family coat of arms still forms part of the city’s flag. Two other effigies survive but in poor condition.

Edward Burne Jones, the artist associated with the Pre Raphaelite movement, was baptised in the church.
Posted by Ubique Matt at Saturday, March 06, 2010 No comments:

Yesterday, along with my father and brother, I traveled up the M6 to visit the Staffordshire Hoard exhibition at the Stoke Museum in Stoke. Although we had to wait several hours in the bitter cold it was definitely worth it. I'd missed seeing the exhibition when it was at Birmingham and we didn't know when it would be back on show. The exhibition finishes on this Sunday (7th March) and will probably be the last time they will be on display together for a long period as they have to cleaned (most of the objects are still covered in good old Staffordshire dirt!).

Remains of a sword hilt.

Found by metal detectorist in the summer of 2009 the local newspaper provided enough information (owner of the land, name of the farm, nearest town etc.) to locate the hoard's original position surprisingly easy. It was supposed to be a secret to protect the site from treasure hunters (how ironic!). The Hoard was actually found a few miles away from where I live in the sunny borough of Walsall, just outside Brownhills in the heart of Mercia. The site is not far from the Roman site of Letocetum (modern day Wall) off Watling Street (modern day A5). But the 'Brownhills, West Midlands Hoard' doesn't quite have the same romantic sound to it. Another local treasure from Brownhills is the fashion model Erin O'Connor but that's a different story.

There really were too many fantastic objects to list them all. There were over 100 items on display but the the hoard contains over 1800 (and counting) objects made from various metals. There is 5kg of gold, 1.3kg of silver and has been valued at £3,285,000.

Queue outside museum - only three and half hours to go! 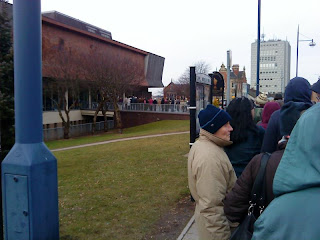 Endurance stamps - you receive one for waiting every 1hour 20minutes. 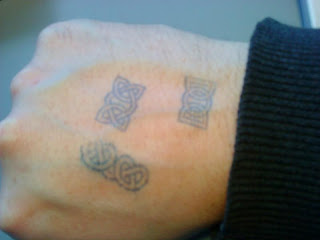 Dating from the 7th or 8th centuries (approx.) numerous objects are made from, what is known fittingly as, the garnet cloisonné technique. These items closely resemble the gold and garnet objects recovered from the burials at Sutton Hoo. However there are little or no personal ornaments in the Hoard (so far). In fact, as far as it is know, all the remains are battlefield relics. Although there is also a cross inscribed with stirring Biblical text. The text almost inspires you to go and pick a fight with any passing pagan Viking upstarts.
A particular highlight for me was seeing the remains of at least one helmet. The right cheek plate contains two Staffordshire knots and is the earliest known representation of this symbol, preceding the previous recorded instance by several hundred years. Along with strips showing tiny armed figures, on display in the ‘helmet case’ were two stylish eyebrow shaped strips of gold. I’d never seen these before in the media and I can’t wait to see if anyone tries to make a replica. To say it would look stunning would be an understatement.

It is the workmanship on these treasures that leaves the lasting impression. A nice touch was that the partition walls the same objects on display were shown nearby greatly enlarged. A two foot high image of a highly stylised horse showed incredible details; the real thing is less than 2 inches long and the details are difficult to even see.

If you don’t have the opportunity to visit Stoke then if, and when in the future, I would urge anyone to see these objects. It will change your view of the so-called Dark Ages forever. It did for me anyway, I’ve already been eyeing up a few Anglo-Saxon miniatures.

Email ThisBlogThis!Share to TwitterShare to FacebookShare to Pinterest
Labels: Exhibitions

The English Civil War (1642-1651) saw the gradual introduction of the firelock musket into British warfare. This style of weapon would remain in use for several hundred years. The firelock was a muzzle loading firearm where a flint replaced the burning wick on the matchlock. Although more expensive to manufacture it had several advantages. Firelock carrying soldiers were often employed to protect artillery positions as you wouldn't want anyone wondering around barrels of gunpowder with lit matches. It was useful in situations such as night time fighting where a glowing match could give away your position. It also had the advantage of not having to keep the match constantly lit during the inclement British weather.

With this set from Warlord Games 'Firelock Storming Party' (£12) you receive eighteen figures in total, consisting of two metal command figures and sixteen plastic figures. My major concern when I initially saw the contents was the fact that the plastics are all of the same moulded figure. On the individual spruces you have the option of two arm poses and two styles of headwear which will give you a degree of variation but not enough for my liking. You may notice that there are a few more than the original eighteen in total, this is because I decided to add a few, five to be precise; leaving me with an odd number (this occurred because I wasn’t paying attention and/or I can’t count!). 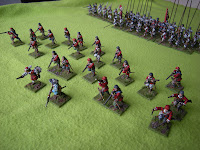 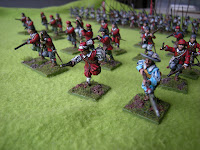 The command consists of two metal figures. These are modelled in nicely dramatic poses. The officer carries a partizan, a medieval polearm which became a symbol of authority (and is still carried by some Beefeaters at the Tower of London during parades). The drummer also gives the impression of movement and fighting spirit. 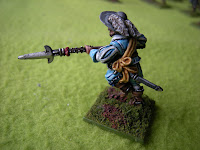 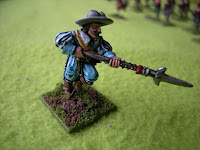 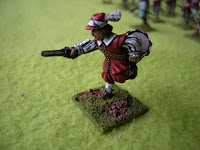 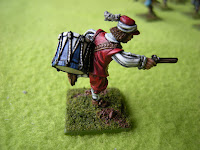 With two of the original figures below I decided to spice them up a little. One is leading from the front with a sword in hand; the other is armed with a pistol, but still carrying their firelocks in their left hand. This was achieved by means of cutting and carving the existing arms taken from the command sprue from WG's plastic infantry box set. The right arm/hands were completely removed and the stock was 'cleaned' up. The left hand, still holding the firelock, was then cut off at the wrist and then reattached to a spare arm. 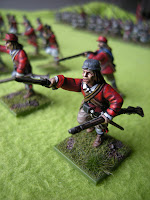 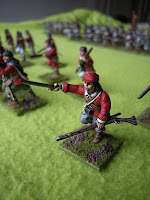 One pikeman figure and four musketeer figures were modified to represent soldiers carrying firelocks. To do this I removed the cartridge cases from the bandoliers and the matchlock moulding from the musket. Belly boxes were then added using greenstuff. 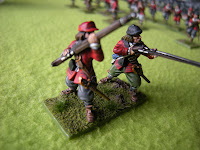 Modified figure shown on the left, the other figures (Whitecoats) are made up straight from the box. 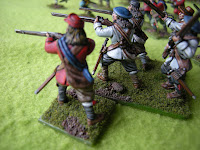 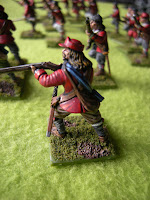 The figures were painted red so they can represent Parliamentarian or Royalist soldiers. Rupert's firelock troops are known to have to worn red uniforms.

Again, all the figures seen here are from Warlord Games' Pike and Shotte range. On the English Civil War front the next figures will be a set of Covenanters from Renegade Miniatures. I’ve been sidetracked again by another project (again) but I’ll post about that at a latter point.
Posted by Ubique Matt at Monday, March 01, 2010 4 comments: