The model detailed in this post is one I made for Arjun (Cor Blog Me), after he kindly sent me a number of ECW figures as a trade. The model is loosely based on the medieval St. Teilos church now located at the National History Museum at St. Fagins. The model is made, more or less, entirely from foamboard, cardboard and wooden coffee stirrers.

After a very long wait for Arjun, this is the completed model. A few of the technical puzzles I encountered while making this model included:
Arjun asked that the building be single span around seven inches long. A nice touch that Arjun asked for was to make the porch separate, something that would have never occurred to me. This simple idea allows the model appear more like a church (with the porch) or a substantial home or great hall (without the porch) where the bell tower could represent a chimney for the great hall. 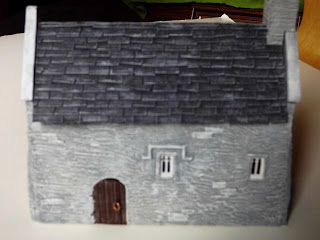 I believe I'm correct in saying that the majority of early medieval buildings would have been covered inside and out with plaster or render (as were most Roman structures). Occasionally this thick plaster is still be seen on the interor walls of castles (and, even rarer still, on outside walls such as at Conway). The only stone work left visual, I assume, would be the high quality dressed stone (such as the imported Caen stone on Norman keeps, for instance) normally only seen on the corner edges of square towers and around windows or door ways. This actually makes producing a model of a stone building relatively easy.

The effect of the painted plastered stone walls seen here was taken from a technique I remembered reading as a kid in an article many, many years ago in Military Modelling. The piece by the late, great Ian Weekley (a genuine master-model maker) showed the very simple method of sticking random pieces of rectangular card (I think he may have used thick blotting paper, remember that stuff? kids - ask your parents) on to a wall and then painting over it with textured paint, I think this was basically regular paint with a tiny amount of fine sand added. 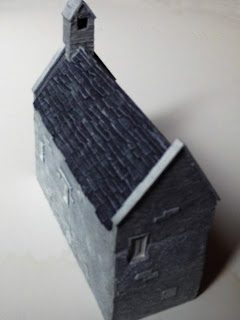 Roof tiles were made from strips of cardboard, and then using a pair of scissors simply cutting notches at regular intervals. This was then stuck on the foamboard roof with PVA woodglue. These were painted to resemsble Welsh state (naturally).

A small bell in the tower was made from greenstuff glued to a length of chain and painted bronze.

The windows were made from plastic card which I drilled and cut so that it resembled ornately carved stone. I then glued a matching piece of clear plastic (taken from a piece of packaging) to the back and then fixed all this into the rectangular hole cut into the foamboard wall.

The main door was made from (yep, you've guessed it) coffee stirrers. The door actually swivels on hinges that I made and built into the wall. It's probably a bit too detailed and boring to describe how I did this without WIP photos (apologies).

I realise I probably should have taken some WIP photographs but this particular model was made almost entirely in the early hours of the morning when I often can't get to sleep and so listen to Radio 4 Extra (at the time it was Journey into Space - The Red Planet with Jet Morgan, Mitch, Doc and Lemmy - pure 1950's Sci-Fi audio popcorn). To be perfectly honest I normally forget to take any photos or usually don't want to stop, create enough space and take snaps once in the 'flow' of actually making the model, especially at two o'clock in the morning. 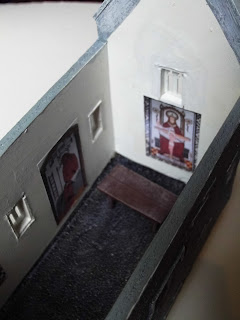 The floor was covered in sand and painted  simply to the cover up the smooth surface of the foamboard.

The 'painted' interior murals are scaled down colour photocopies of the actual paintings that were recreated inside the church.

If you'd like to see some decent photographs than you can can find more on Arjun's blog:
Cor Blog Me St Teilos Church
Posted by Ubique Matt at Monday, October 01, 2012