This figure will eventually represent Lord Dudley but it wasn't my original intention to use this actual miniature. I had always planned on having three matching figures for both my mounted and foot miniatures but as a result of poor forward planning on my part (never one of my strengths) I literally ran out of matching parts for the mounted figure. The figure that will now represents one of 's sons should have been the main man himself. The barbute helmet wasn't my first choice either but I was left without further options. I'd like to claim that this figure is based on the the famous Avant armour on display in Glasgow (images here) but it's just a coincidence. At least it will help the figure stand out among the others wearing the more common sallet variety.

As I was running out of options for a figure wearing full harness I realised that I would have to make an alternative so I used the same standard body but decided to make the foot figure match the mounted knight. 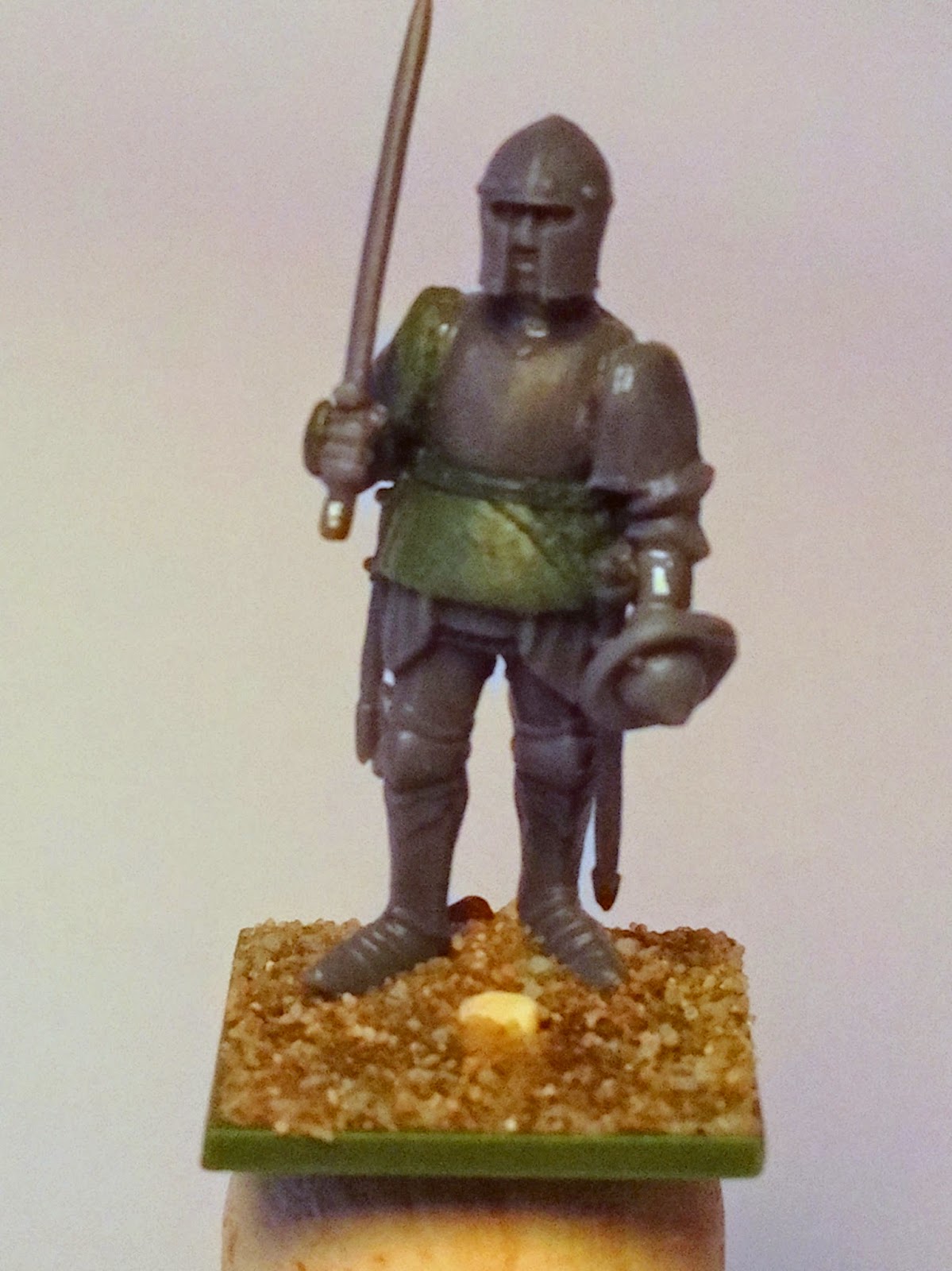 As far as I can gather the wearing of tabards became quite old fashioned towards the end of the C15th. but I wanted to paint Lord Dudley's heraldry onto the figure (Dudley himself was relatively old when the wars started). This meant I could use standard arm pieces but I would have to modify the upper body to make it look as if he was wearing a tabard over his harness. To do this I used a sharp (i.e. new) scalpel and removed all the detail from the belt upwards such as the stomach and back plates. Once this was smoothed out I then added greenstuff below the belt line to look like material covering the upper part of the tassets (thigh armour). Once this part had cured I added the belt detail using greenstuff. 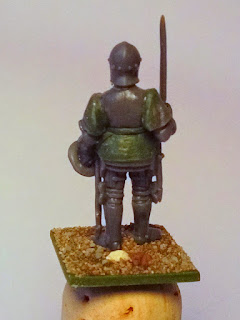 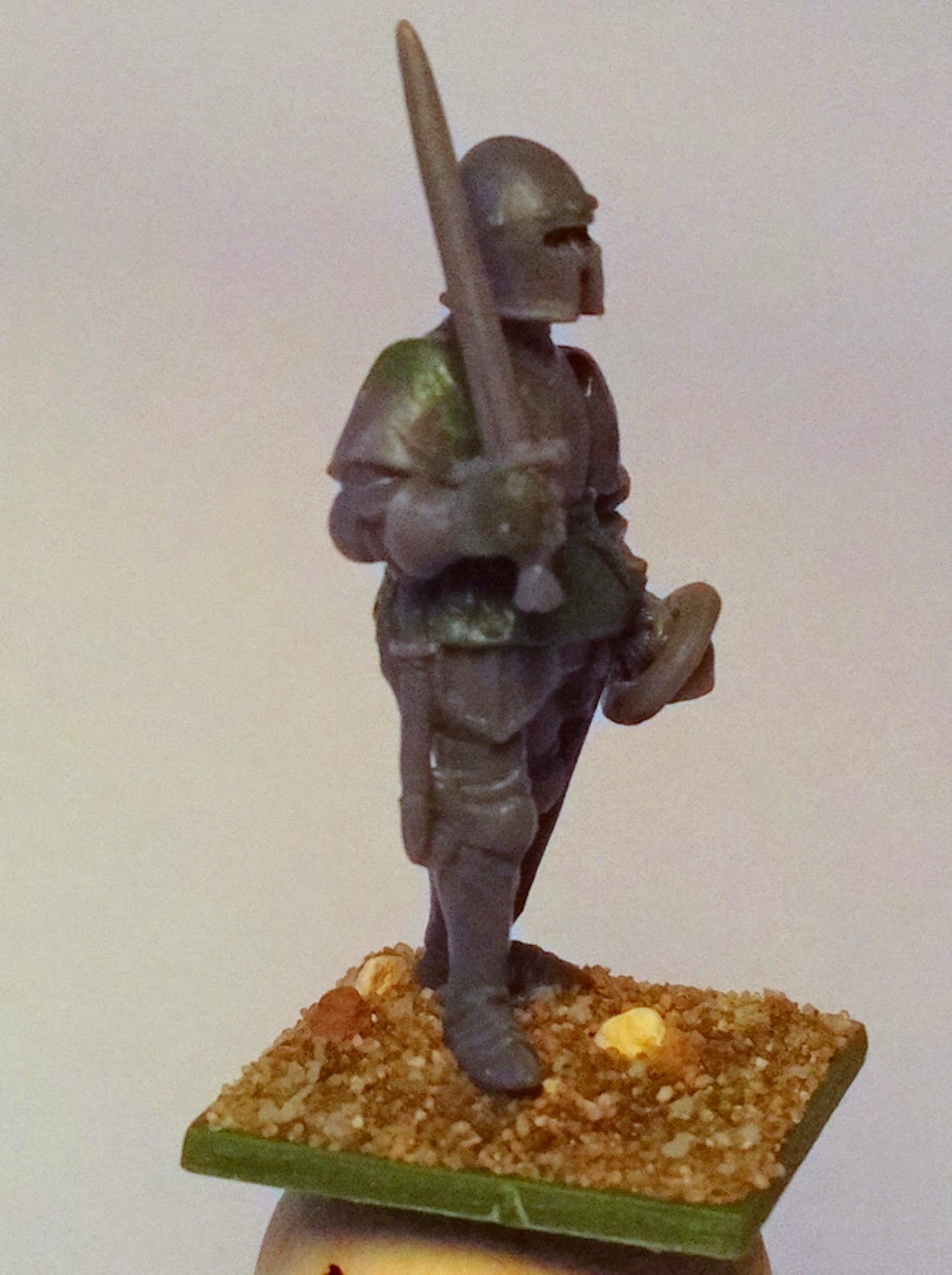 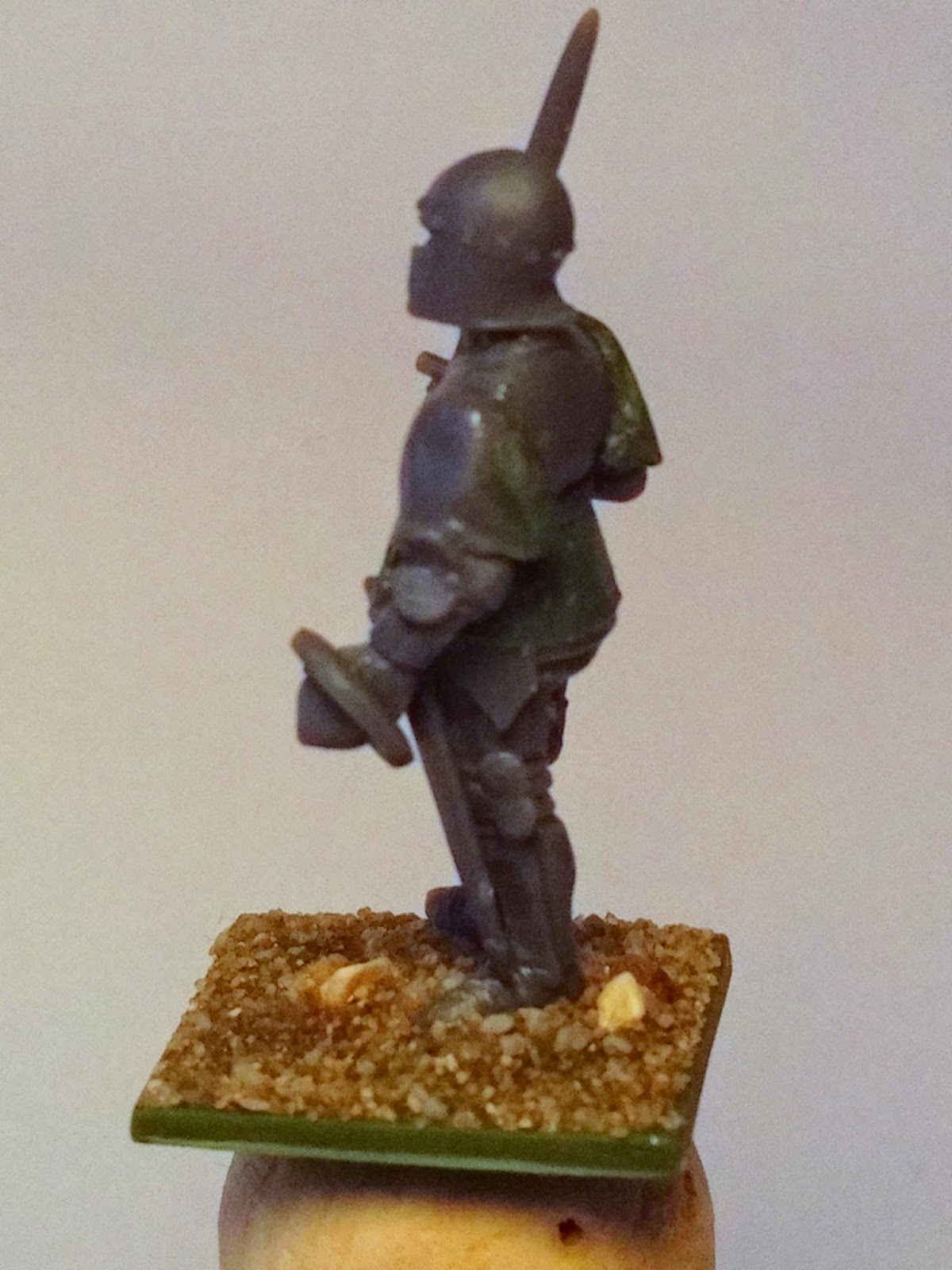 For the left arm I removed the knife from the standard arm piece and then left the figure on my work bench. I find it's sometimes best to leave figures like this to one side so you can occasionally just glimpse it once in a while. Mistakes or unnatural poses will soon become evident because they will become more and more obvious when you look at them. Although pleased with the results so far I wanted the figure to really stand out more than the others so added the small buckler.


Now I'd like to claim that I did all my research first and then only commit to butchering..sorry, modifying a plastic figure to suit but this is not always the case. As mentioned above I adopted my usual approach and left it to one side to ensure that it 'looked ok'. After a while one detail kept on drawing my eye was the length of the tabard, with me now thinking that I'd given Lord Dudley a mini -skirt. The seeds of doubt were sown after I remembered seeing the brass of William Catesby in St. Leodegarius's Church, Ashby St Leger (it was one of his descendants that organised the GunPowder Plot and which may have been organised in a nearby room next to the churchyard). This brass shows Catesby wearing a close-fitting short-sleeved tabard which is considerably longer than my version and covers half of his thigh. This seemed to confirm my suspicions but before I started mixing up more greenstuff I thought I would just double check to see if there were any more examples. Using Google ('All Hail') Images I happened to come across the following brasses of:

All show a close-fitting short-sleeved tabard that reveals the tassets just as I had modelled Lord Dudley. I quite like the similarities with Say's life and that of Dudley but I will go into more detail on this when I finally post my epic Lord Dudley mini-series - only five years in the making so there's no rush.
Posted by Ubique Matt at Thursday, May 21, 2015